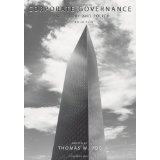 Joo himself voices some rather revolutionary opinions. For example, in his 2001 essay, “The Modern Corporation and Campaign Finance,” he rejects the current legal model, which legitimizes wealth maximization but refuses to recognize other motives. ”The law should communicate society’s disapproval of the mercenary view by rejecting the presumption that shareholders always value wealth above their political preferences.”

Although his conclusion doesn’t appear, at that time, to support greater participation by shareholders, he did advocate limiting corporate participation in politics. “Law and markets have created organizations that favors the efficient over the expressive and, thus, have created organizations that deserve less First Amendment protection than individuals do.”

However, by the year 2003, Joo appears to be ready for greater shareholder democracy, criticizing the SEC proposed access rule as “too limited to have much impact. If the SEC is serious about empowering shareholders, the Division should reverse its interpretation that boards may exclude shareholder proposals with respect to voting procedures that ‘may result in contested elections of directors.’”

The Handbook of Board Governance – read my Chapter 21, The Individual’s Role in Driving Corporate Governance. Current focus:  Rulemaking Petition for Real-Time Disclosure of Proxy Votes, SEC File 4-748, Jul. 9, 2019 Please add your support by following the instructions at the end of Mutual Fund Wars Over Fees AND Proxy Votes. Don’t miss: