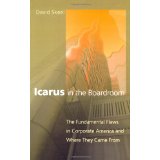 America loves risk-taking CEOs, but when such behavior crosses over to boardrooms it could have massive consequences because of the growing scale of businesses and society’s greater dependence on equity markets. Icarus in the Boardroom: The Fundamental Flaws in Corporate America and Where They Came From (Law and Current Events Masters)

, by David Skeel draws on Greek mythology to present a candid warning aimed at corporate directors and anyone concerned with our economic future.

Trapped in a labyrinth of his on construction, Dedalus made wings for himself and his son Icarus. He warned Icarus not to fly to close to the sun but Icarus got carried away, failed to heed the warning, and plunged to his death after the sun melted the wax that held his wings together. Similarly, the corporation is a powerful human innovation, but is dangerous if not used properly.

But this book isn’t about businesses being “socially responsible,” in the normal sense of health, peace, or global warming. Instead, Skeel is concerned with the impact that corporate failures can have on the economy as a whole. From that standpoint, Icarus in the Boardroom offers excellent advice on creating a sustainable business climate, getting to the source of problems instead of the symptoms.

He attributes several recessions and the Great Depressions to an ”Icarus Effect,” brought on by three factors:

The bulk of the book is devoted to a short history of the corporation followed by an excellent treatment of these three thematic factors and corporate failures though US history. He explains how government has responded to Icarus effects and how corporations have worked to first adapt, then often to circumvent or unravel government’s attempt to save us from corporate excesses.

In general, “the lobbying might of corporate managers, and the power of their political contributions, is too great for even relatively minor reform to succeed,” he notes. However, the wake of financial scandals provides an opportunity to “change the political calculus.” We witnessed such changes after the 1929 crash when reforms like creating the Securities and Exchange Commission stopped short of federalizing corporate law.

More recently we enacted Sarbanes-Oxley to address the scandals of Enron, WorldCom and Tyco. Where did we stop short this time? Skeel advises that we partially addressed fraudulent risk but left the other Icarun factors largely untouched. Among Skeel’s many recommendations:

“Ordinary Americans no longer see corporations as ‘other,’” because more than half now own stock (directly or indirectly). As defined benefit plans dwindle and 401(k) participation increases, Americans have come to see their own stakes, however small, as tied to those of corporations. Skeel cites an important study by Dallas Federal Reserve Economists John Duca and Jason Saving that found “a direct correlation between stock ownership and the Republican vote in recent Congressional elections. As stock ownership goes up, so does the Republicans’ share of the Congressional vote.” It’s no wonder President Bush keeps pushing privatization of Social Security.

“The increasing identification between ordinary Americans and corporate America is perfectly understandable, but beneath it lurks a terrible irony: at the same time as our passion for real reform has declined, the risks have radically increased,” writes Skeel. In the past, investing in stocks was an activity largely limited to the rich who could afford to speculate. Now stocks have become the investment of choice for “life” savings and retirement.

With so many of us now dependent on corporate performance, let’s hope it doesn’t take another Great Depression before American’s wake up to the need for reforms of the type outlined by David Skeel.

However, most of Skeel’s recommendations will require national reforms. With the US Chamber of Commerce spending more than $53 million a year lobbying against such changes, what is an enlightened board member to do (other than terminating membership in the Chamber)? Try the following: