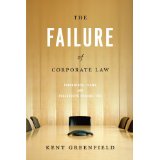 posits that corporation law shouldn’t be thought of as “private” law, which governs the relationships of individuals, but as a branch of “public” law, such as constitutional, tax, or environmental law. Corporations are sanctioned by the state and our goals for them should include more than just maximizing profits for shareowners.

Corporate laws determine the rules for some of the largest most powerful entities in the world and America is exporting our model abroad. I’ve warned audiences around the world not to adopt our regulatory scheme wholesale. While my advice has been vindicated by the latest financial meltdown, it is good to see an extraordinary legal scholar pushing for thoughtful change.

Some functions are just too important to be left to for-profit companies. Airline security is one. Another would be ensuring an economy that meets our collective goals, not just the goals of shareowners, as modeled by a law-and-economic view.

Greenfield’s discussions are well argued. His critique of “enablingism” and the role of corporate law limited to establishing default rules parties would choose if they actually negotiated them, to be enlightening. As he points out, it simply reinforces status quo market power, rather than ameliorates it. In this trickle-down theory of law, we get only the rights we can pay for. It’s a theory based on the premise that “what is good for shareholders is good for corporations, and what is good for corporations is good for society.”

Yet, income inequality in America is worse than in any other developed nation and is the worst since WWII. What is good for the workers may be a better placeholder for society as a whole than what is good for shareholders. Workers have every incentive to keep their firms alive, whereas shareowners are generally willing to take greater risks because they are more diversified.

Greenfield reminds readers, “The so-called free market was a creation of law, not of nature.” “Private entitlements should spring not from some theory of extralegal natural rights but from a theory of the social good, formed by political judgments about how best to achieve that good.” Treating corporate law as private law exaggerates private rights at the expense of public interest.

Our present legal conception is not inherent in capitalism but was inherited from the laissez-fare politics of the Gilded Age. Corporate law, like labor law, tax law, and environmental law should be predicated on collective political decisions about social goals and ideals. Non-utilitarian values such as equality and human dignity should inform corporate law, just as they inform other areas of law.

A central tenet of the book is that internal governance procedures can lower external enforcement costs. Plus, they follow the corporation outside the boundaries of states and countries. Greenfield critiques the law-and-economics paradigm, arguing that shareowners aren’t the only ones entitled to ownership claims. Even though a stakeholder approach should be more efficient overall, he argues it is reasonable for society to forgo the possibility of very high corporate profits to avoid disproportionate harm to workers and communities. This is especially so, given that only a small portion of affluent shareowners stand to the reap the gains from high profits, since 1% own 34% of all shares and 10% own 77%.

Greenfield formulates five principles for those developing public policies in the area of corporate governance:

I like Greenfield’s values. He backs up his arguments with research on real behavior, not just with economic theory. For example, research finds that “an individual’s decision about whether or not to comply with rules is ‘more strongly influenced by legitimacy than it is by estimates of the gain or loss associated with that behavior.’” Monitoring costs are “deadweight losses.” The more we can reduce them by involving workers, the more productive our corporations will be.

The Failure of Corporate Law
The Speculation Economy: How Finance Triumphed Over Industry