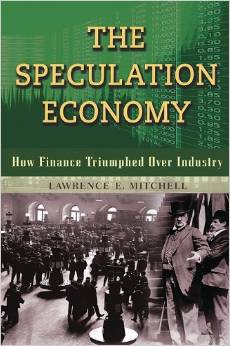 Lawrence Mitchell chronicles the formative era of what he calls The Speculation Economy between 1897 and 1919 when the American corporate landscape shifted from independent factories controlled by entrepreneurs to one driven by financiers, promoters, and business managers focused on the stock price – “stock market capitalism” – where more is made from legal and financial manipulation than from practical improvements such as technology, management, distribution or marketing.

This turn was “neither the necessary nor inevitable form of the American economy.” As I read it, the resulting speculative economy pushed our collective life to more atomistic forms of competitive individualism that may eventually be our undoing. “It is within our power either to change it, to modify its rough edges or to accept it as it is,” argues Mitchell. It should be easier to move forward purposely if we understand how we got to where we are now. Mitchell does an excellent job chronicling the journey.

“For almost two decades now, many countries have been at a decision point as to whether they will adopt the American way or pursue their own, or even whether they have much choice in the matter. This book teaches them that they do,” he writes. I’ve had much the same inclination, warning investors in Japan, Korea, China and elsewhere that they can do better as I try my hand at reforming our own system.

Mitchell breaks the history of this important shift into three rough phases:

In Mitchell’s interpretation of history, the giant corporation was created primarily to sell stock that would make its promoters and financers rich. The corporate form limited destructive competition and took advantage of the efficiencies of size and centralized management. The stock market took the place of a vanishing frontier for the middle class. Wall Street became our wilderness and corporate stock our grubstake.

Financiers could profit, whether industrial profits were high or nonexistent. Arbitraging the stock, profiting from price discrepancies instead of work, became the path to wealth and a touchstone of America’s self-destructive short-term economy.

American’s had long viewed private property as an “extension of the individual, the product of the individual’s motivations, interests, talents and efforts.” Competition would be between corporations, rather than individuals. The stockmarket became the measure.

At first, the issues were how to prevent the excesses of monopoly. Yet, the competition between states was a race to the bottom for corporate licensing fees and the eventual defeat of James Madison’s idea of chartering by the federal government. Readers learn the origin of terms such as “watered stock,” “overcapitalization” and how the matters of “valuation” and “goodwill” were addressed over time.

Also interesting is the development of the financial press. In 1899, for example, the Wall Street Journal’s primary concern was the safety of principal, rather than the rate of return. “Stocks should not be regarded as an investment, because it is optional the with management of a company whether it pays a dividend or not… Therefore the outside investor should always take bonds instead of stock.”

In 1902, the United States Industrial Commission observed that democracy and self-governance were only learned by practice, and the man who was accustomed to “absolute submission in industry” carried the consequences of that submissive posture into civic life. Giant combinations robbed Americans of the kind of entrepreneurial spirit and individualistic impulse they had enjoyed as farmers and small proprietors. Over time, participation in corporate governance, as stockowners, came to be seen as a possible reinforcement to political efficacy.

“As early as 1899, the New York Times implied that investing in securities more or less fulfilled the demands of Locke’s labor theory of value. ‘As soon as a capitalist is willing to be troubled further, as soon as he begins to take a personal interest in his investment, and to give his personal attention to looking after it, he ceases to be a mere capitalist, and his return from his investment becomes, not merely the interest on his money, but also something in the nature of wages for his own services in the way of superintendence.”

That language, implying that active informed investors can enhance wealth production, presaged CorpGov.net’s homepage by almost 100 years. What is new since the 1899 New York Times article is that corporations now have so much control over our society that they have become effective intermediaries for shareholder influence, not unlike the citizen’s use of representative government to influence society-at-large. Land gave colonial Americans the right to vote and influence politics. Stock gives modern Americans a similar role with our dominant institutions, corporations.

Mitchell explains that during the time period leading to the speculation economy, having a stake and taking an active interest in corporations was also seen as a defense against socialism. “Ownership would keep workers happy, productive and away from strikes.” By the 1920s offering employees stock ownership was widespread. US Labor Commissioner Carroll D. Wright even predicted in 1903 that the wage system would disappear and be replaced by “profit sharing and cooperative plans.” Maybe that’s happened on Wall Street, but elsewhere we have a long way to go.

A large portion of the book is devoted to explaining the various pieces of federal legislation and key players. Mitchell documents the growing influence of financial promoters on politics and a preference for investigatory commissions and delay over substantive regulations. We also see the development of the Republican Party as the representative of financial interests, as well as the importance of alliances with Southern Democrats who were suspicious of any action that would erode state’s rights. Ultimately, according to Mitchell, it was a group of Southern Democrats, under Woodrow Wilson, “that made America safe for business.”

“As corporations needed to retain cash to grow and dividends became a smaller share of corporate profits, price appreciation followed as a substitute for dividends.” The USA moved into the speculation economy based not on “productive assets or past profits but on the possibility of profits to come at some unspecified point in the future. They demonstrated their willingness to invest on faith…” What had changed was the suitability of stocks as repositories for the savings of ordinary people.

When you bought stock for income, you had to pay attention. Mitchell quotes Graham and Dodd: The typical stockholder “gave at least as much attention to the asset value behind the shares as he did to their earnings records.” The pre-WWI buyer knew the corporation, paid attention to the business. “The postwar buyer did not care about the corporation. He cared about price trends, reputations and rumors.”

Mitchell, highlights the important role played by Liberty Bond drives, which encouraged purchase on the installment plan, in bringing the idea of investing in securities to the American public. Those drives established an army of investors and securities salesmen.

Regulation, as it evolved, focused on the disclosure of the terms for selling, rather then the details of corporate governance…due diligence in purchase, not in ongoing operations. The result is less of an emphasis by investors on fundamental values and more of an emphasis on expectations that are built upon the expectations of others. “The natural response is for management to do what it has to do in order to meet the market’s expectations, no matter how unrealistic those expectations may be.”

In the epilogue, Mitchell discusses how, until recently, corporate control was lodged with large stockholders, financial institutions and the families of founders who insulated management from market pressures. The takeover decade of the 1980s stripped that insulation away. “Shareholder valuism” came to describe the purpose of corporations.

Impatient short-term stockholders give managers “irresistible incentives to maximize stock prices at almost any cost to the corporation’s long-term health.” Annualized turnover on the NYSE jumped from 36% in 1980 to 88% in 2000 and 118% in 2006. “There can be little question that American business is driven by finance. And the demands of finance have become short-term.” Europe, Japan, Canada, New Zealand and Australia still have concentrated block-holders insulating management and taking a more long-term perspective. But for how long?

Mitchell notes, “When corporate economies are ruled by concentrated ownership, the responsibility for success or failure is primarily on those who own the controlling interests. When a corporate economy is ruled by a stock market characterized by the dispersal of ownership throughout society, responsibility shifts. Members of the speculation economy typically treat their participation in American corporate capitalism as a private matter with their decisions made on the basis of their own self-interest and without much regard for the behavior or decisions of others.”

As I have reported elsewhere, the Gates Foundation holds the same philosophy. How they invest is a private matter, with no relevance to their overall mission. Many of us question if the damage done by such a consistently short-term investment philosophy, and the example set for other foundations and endowments, is undoing the good work of Foundation grants.
The strength of our economy, the health of our people and planet, may depend on our ability to take a longer-term multigenerational assessment of our welfare.

Mitchell concludes that incentives to move us toward long-term health “can only be provided by the market for, in the end, the market is the master.” However, he also makes it clear that markets are socially constructed. They can be reshaped to achieve more salubrious results, if we will only provide the incentives.