The rudimentary software Broadridge offers corporations for running virtual annual meetings disenfranchises shareowners. This was on display when Symantec Corp. hosted a virtual-only annual meeting with the software in September. It was again on display yesterday.

There is an old saying that cautions “never smoke your own dope.” Broadridge didn’t heed that advice yesterday when they held their own annual meeting as a virtual-only meeting using their own software. The result was more technical problems, more disenfranchisement and more promises to “look into the problem”.

First, let me caution that, if you ever attend a Broadridge-hosted virtual meeting for the first time, don’t try to log in five minutes before the meeting starts. You will never make it. There is a two-step process that has you first create an account with Broadridge and then sign-in to the virtual meeting. Just reading the lengthy terms of agreement will take twenty minutes.

Shareowner L. Jacobs granted me a proxy to attend yesterday’s meeting on her behalf. Usually, a grant of proxy is documented with a formal letter, which one presents for inspection before entering an annual meeting. Broadridge’s web interface afforded no means to present my credentials. I dutifully held mine up to the forward facing camera on my computer monitor. At least I could say I tried.

The next challenge was a declaration on the Broadridge website:

In order to participate, you must be validated stockholder of Broadridge Financial Solutions, Inc.. [note to Broadridge, yes you have a typo.]

The site said nothing about attending as a proxy. It provided no means to sign on as a proxy. Ever mindful that rights not exercised are rights lost, I navigated the log-in as best I could, ultimately signing on as if I were Jacobs.

Here is the screen I saw next. Take a good look at it, because it is all I saw for the next hour: 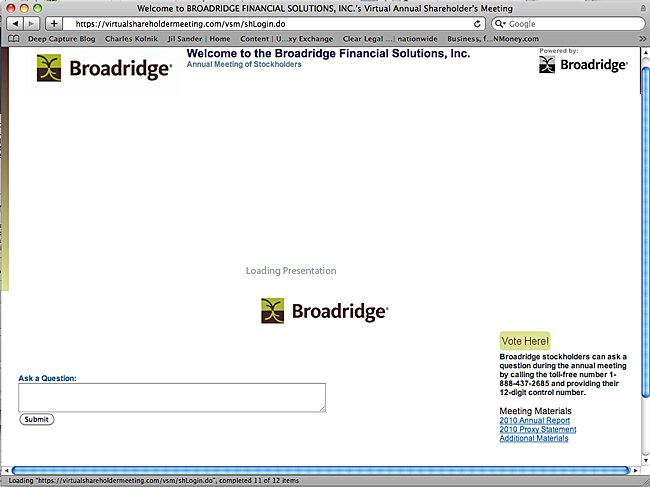 The minutes ticked by. Was the meeting delayed? Anxiousness about whether the interface would work gradually turned to a sickening realization that it was NOT working. This is how disenfranchisement happens. No one tells you “You are disenfranchised”. It unfolds indirectly. A polling place never opens, for reasons not explained. Or you show up to vote, but your name is not on the voter list. Or you try to log onto a virtual annual meeting, but the interface doesn’t work.

Did Broadride even know there were problems? Were they delaying the meeting while problems were fixed? I felt alone. If a tree falls in the woods where no one can hear, does it make a sound?

I couldn’t access the meeting with either my Safari or Firefox browsers. Both browsers displayed the same blank “Loading Presentation” screen. Refreshing either browser did not help.

I got on the phone and spent the next fifteen minutes talking to three different people at two different Broadridge numbers, trying to fix the problem. I don’t want to get anyone in trouble, so I won’t mention names. One person I spoke to didn’t know if the meeting was in progress. She checked and confirmed it was. Another told me “They are having a problem at the moment, so it is not your computer. It is a problem with the system itself … there are a lot of people having problems with it right now.” The conversation that followed was troubling:

Support person: “No. They are working on it, but they haven’t said when.”

Support person: “There are a lot of people that are having problems with it right now.”

Glyn: “Is there any way to let people know when the meeting will be held?”

Support person: “The meeting is still going on. It is just having technical difficulty.”

Glyn: “They are conducting the meeting while people are not being able to participate! Is that correct?”

I tried dialing the phone number for shareowners to call in questions to the meeting. I provided Jacobs’ control number and stated I was acting as her proxy. The question & answer session was already in progress, and I could hear over my phone the chair answering a question. He was saying something about investors entrusting Broadridge to provide “mission critical services”. It would have been funny, except he was right. Investors have no say in the matter. We are forced — by Wall Street, by the corporations we invest in, and by the SEC — to rely on Broadridge for mission critical services.

When it was my turn to speak, I asked if the chair was aware people were having difficulty logging in. He said he wasn’t aware of the problem. I asked my question while he had people look into the matter. After answering my question, he announced that four people had reported problems to technical support, and three had been resolved. That sounded different from what the technical support person had told me. Basically, he was saying I was the only person who couldn’t log on.

The chair went on to answer more questions, and my phone line went dead. I was once again cut off from the meeting. I called technical support again. I spoke to a different person who told me the Broadridge software only supported certain versions of Windows Explorer and Firefox. I was using Safari and Firefox on a Mac. Perhaps the software didn’t support browsers on a Mac, but I thought it unlikely. If the problem was with the browsers, I would have expected each browser to fail in its own unique way. The fact that both browsers displayed identical “Loading Presentation” screens suggested they were working fine, and that the problem really was with the Broadridge system.

On the other hand, if Broadridge knowingly does not support Safari — which most Mac owners use — that is shocking. There was no warning on the virtual meeting website. Is Broadridge providing “mission critical services”, or are they keeping up appearances? A situation is emerging with Broadridge’s virtual annual meetings that is similar to that with Broadridg’s proxy services. Both are “mission critical”, but there is a lack of transparency. Anecdotal evidence suggests the “proxy plumbing system” is a shambles, but there is no transparency. Anecdotal evidence suggests virtual-only annual meetings are a shambles, but there is no transparency.

Broadridge has a reputation problem. This is what I tried to point out in the question I called into the meeting yesterday. They publicly take no stance on whether corporations should offer hybrid or virtual-only meetings. But through their actions and leadership on the issue, they promote virtual-only meetings. After all, they could have avoided controversy and held a hybrid annual meeting.

There are some 13,000 annual meetings in the United States annually. Providing technology for conducting these as hybrid meetings could be a wonderful new market for Broadridge. Rather than seize this opportunity, they are floundering in the controversy over virtual-only annual meetings. As long as that controversy continues, many shareowners and corporations will resist their technology. Broadridge should do what makes business sense and what is ethically right. They should facilitate only hybrid meetings, at least until the technology is advanced enough that shareowners trust it. Until such a time, shareowners need to stand together and oppose virtual-only annual meetings. The alternative is disenfranchisement.

One Response to Broadridge Smokes Their Own Dope