Since 2004, shareowners have been filing a proposal at corporations asking for greater transparency in their political expenditures. There are now about thirty proponents, and the number is growing. Their proposals incorporate model language developed by the Center for Political Accountability (CPA). The language has evolved slightly as campaign finance laws and practices have changed, but the thrust has remained about disclosure and board oversight. The proposal has won majority support at just two corporation, Unisys and Amgen. But seventy-seven S&P 500 corporations have implemented it following negotiations with proponent shareowners. Institutional opposition to the proposal has softened. Yesterday, CPA released a report indicating that, for the first time, main-stream mutual funds have not cast a majority of their votes against the proposal, choosing to either vote for it or abstain, instead. 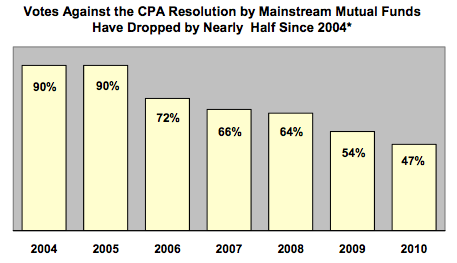 *average of 3,982 votes per year. (Source: Center for Political Accountability)

According to Bruce Freed, president of CPA, this year’s controversial Supreme Court decision in Citizens United v. Federal Election Commission necessitated no changes in the model proposal, but it made the proposal all the more important for helping companies manage the heightened risks from and pressures to engage in political spending.