Disclaimer: These are my notes from a conference of mostly California pension funds. I’m not a very quick note taker, so I have a tendency to fill in the “gaps” with relevant material from the Internet and with my own interpretation of what where I think the speaker was going. These notes are basically a small part of a more than 15 year diary mostly written for my own future reference. Of course, I try to be accurate but this is a blog. I don’t have the fact checkers and other resources of publications like the New

York Times. On the other hand, I’d like to think that I sometimes bring additional insights to bear on the subject… sometimes more than the average reporter… although that may be delusional on my part. Sorry, these notes are even more cryptic than usual but hopefully still of use.

The subject of the 1st day of the LA Pension Fund Trustees Roundup 2011 conference was, Pension Fund Strategies for Securing Fund Assets. 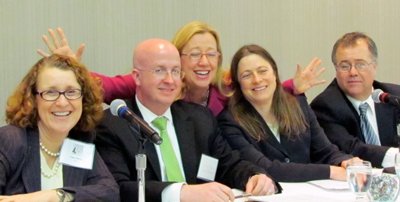 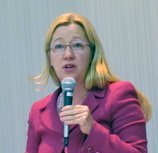 Anne Simpson – CalPERS is focusing on single issue… majority vote. ID 50 companies. 22 agreed. Apple though it was above and beyond. CalPERS has $1B in Apple. Majority vote won 73% of vote.  We tweeted on voting at Apple. Facebook, YouTube. If you can to go fast go alone; if you want to go far, go together. 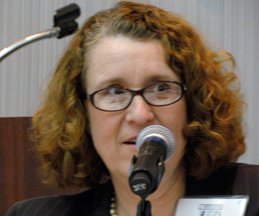 Laura Berry. You need to own $2,000 for at least a year to file a resolution. Make a statement in 500 words. Most common reasons for exclusions are “substantially implemented” or “ordinary business.” ICCR argues that in the work of justice and sustainability there is very little that is ordinary business, less that is none of our business. Arc on one news story. Begins with a conversation with a company. Best way to get it started is to file a resolution. Gets board, mgt and attention of other shareowners.

ICCR has filed hundreds of resolutions to pharma re pricing and other issues. Held two roundtables: NGOs, investors, pharma. We’re developing new tools that result in greater access to medicine. One is the notion of a patent pool. How do drugs get to the people that need them. New structures influncing business model.

Michael Ring says one union or fund he talked with couldn’t see the benefit of hiring a proxy advisor. How do we get public to wake up?  Laura – We owe it to ourselves to get hooks into our various communities to write a letter. For the choir to get out their singing. Ning-based sharing site on ICCR. Many young people no longer interested in congregational or faith life but they are very interested in doing something about social justice.

Michael Barry, Grant and Eisenhofer – sometimes you just have to sue them. It can be a very effective tool in the chest. 4 types of cases. See representative cases here.

Importance of being involved in suits. Independent legal reason. If a rules gets passed; it is going to get challenged. Proxy Access – Chamber and BRT say the SEC didn’t consider letters. If letters don’t get to the SEC, their rulemaking can’t be defended so it is important to comment.

Lisa Donner – Americans for Financial Reform – tool of lobbying. Couldn’t win a vote around bankruptcy reform. Questions about how Wall St. works is fundamental to whole ecomony. Rules are made by inside players. Engaging around rulemaking. Many urgent questions. A long way to go. However, we are clear how important engagement is. Each additional comment can really make a difference.

The 2,000 plus page Dodd-Frank law is being attacked for various repeals. Opponents are also attacking funding of SEC and CFTC (esp. CFTC). Fundamentally important fight. Congress needs contacted. We need these agencies to be able to do their jobs. Consumer Financial Protection Bureau funding under attack as well.

Second area of activity: rule writing. A rule coming up. Proposal by FDIC prohibition on incentive compensation that incents over risk. Three years at least. We need thousand of comments on how it should be strengthened. Let the public know. Public should weigh in. Develop an e-mail activist list. Prioritized list on website. e-mail blast. ourfinancialsecurity.org Pay: struggle to prioritize. Exec comp rule important and is something that could make a difference. The rule could be strong or lame. Issue is important because it can be understood by the public and is popular. See rule. 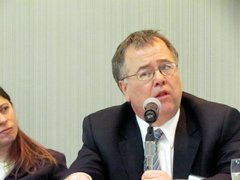 Hugh O’Reilly – rabbit-hole is maximizing fund return. Make sure what you have promised is delivered. Measure not rates of return in isolation but funded positon of plan. Makes your service providers more accountable. Measure far more understandable. Not a majority view in Canada but important among his clients.

Use plans as a way to protect members. Public services being divested out to private. Public workers lose their public pension fund. One fund in Ontario is following its workers to the next job. When it comes to a pension plan, protecting its active membership base is crucial. Some plans will find this easier to do than others. Expand membership base. One pension plan has its own private equity investment firm. When there is a fire sale of Crown investments, the pension fund can invest as well. Helps manage and brings workers to table. Use the institutions we have to protect our members. Unions are on the agenda for breaking.

Aeisha Mastagni, Investment Officer CalSTRS – Focuses on corporate board diversity. Minority representation has declined. Include minority and women candidates in the pool. Look at other sources. Put up a sample proposal. Submitted 8 proposals, withdrew 5. Remaining in negotiation. Easy to get people involved.

Michael Garland – Asking audit committee to examine internal controls of mortgage pipeline, compliance with applicable laws, internal control, etc. (toolkit) Service mortgage pools for investors.  Leg. to service mortgage if they also hold the asset as a first because won’t want to take a haircut. Sloppy paperwork all around. All filed 10-k that losses could be material. Analyst report on Citigroup. 8 days before it filed 10-k it had been warned of failures. Key press. Foreclosure Gate.

Greg Kinezewski of Marco. Cumulative voting. Explained history in California, was required by corporate code, then allowed opt out in 1989. 2010 average vote was 28%. If proxy access comes about, even more important. California funds are required to vote in favor of cumulative voting by law.

I’d be interested in hearing from readers on this one. Will cumulative voting primarily increase proxy access to responsible long-term funds seeking proxy access or will it facilitate the further dismantling of our economy by vulture funds?

Brandon Rees – AFL-CIO – spoke to the ratio reporting requirement of Dodd-Frank. Companies argue not material to investors. CEO to worker pay will help limit CEO pay. We have great disclosure but also highest pay. How much is our

CEO being paid, ratcheting up. Boards aren’t focused on their own company but compare themselves with others. Recast to look within company, instead of to peers. Internal wage disparity hard on retention, employee morale. PayWatch website is single most popular part of AFL-CIO website. Push to cut off international employees, exclude part-time, subsidaries. Needs to be comprehensive. 1. write to SEC re rule  2. Tell Anne Yerger if CII should have a policy. 3. Tell Congress not to reopen Dodd-Frank. Fairness in pay. Overpaid CEOs and Underpaid Managers.

Laura Berry – files 300 resolutions on 100 topics. Vote with the Nuns. Huge contraction of PE ratios and returns. Mergers don’t really create value. Think through business model. If you are holders in pharma companies. Proposal on Pharma pricing policies. Merger of business model and justice. We have medicine but it is too expensive. Looking at ways to move the drugs. Loosen patent pools, open source. Open up, sometimes new products emerge. Foxfire is one example. Long-term investors  our horizon is “eternity.” When in doubt, vote with the Nuns.

Richard Metcalf (LiUNA) – public policy polling. Elections in Wisconsin Governor would lose. Getting average of 31% of vote on succession planning. Need process of developing internal candidates. Engaging in front-end and doing followup. Does the person being groomed fit into business plan. We need to followup on proposals. Difference in adopting and implementing. Need to followup to ensure implementation. Apple succession planning.

Renaye Manley of SEIU Capital Stewardship – don’t buy through MERS. Hot mess, not getting any better. 1300 out of 2000 had violations. Want to make sure our funds don’t purchase funds dependent on MERS. Analyze exposure to MERS. If you have AG or county officials join with us in possible lawsuit.

Per Olstad – policical payments disclosure and accountability (change to win) Need disclosure to 501(c) groups. trade associations and PACS. In 2006 mid-terms 400% increase. Large number of sharowners who have made this a priority. Clear case for abuse. Many more funds involved. Ensure corporate assets spent to further company not agenda of CEO.

Be sure to check out the LA Trustees Round Up site, and the new California Corporate Governance Network site with many resource materials from the speakers.