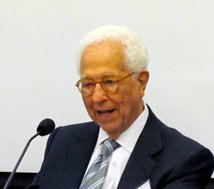 The first session of the Yale Governance Forum 2011 was held under Chatham House Rule. Panelists were announced in advance, so that is no secret, but under the rule those reporting must not attribute what was said to specific individuals on the panel or in the audience. This was a discussion where, often, members of the audience were as assertive as those on the panel.

Be forewarned, what you’re getting here is largely my take-away, complete with all my own personal bias, rather than an accurate reflection of what actually was said. Here’s a few photo to set the context, more at the end. 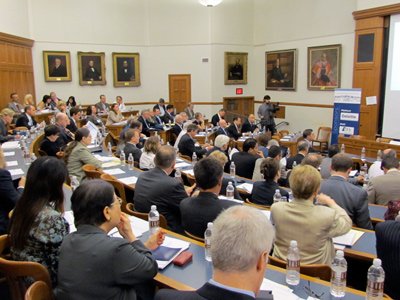 The market isn’t efficient. There is bias in pricing but it isn’t like a random number generator… like a casino. We want managers beholden to owners but not to short-term owners, other than in special situations.

While it is rational to discount future earnings, we have gone overboard.

Benjamin Graham was critical of short-termism (see A long history of myopic investing, FT.com, May 15, 2011). Many managers, when buying machines will only buy if they will pay off in 3-5 years, even though their useful life may be much longer. Therefore, firms themselves play short even though they often say they play long. As a result, many good long-term projects don’t get financed.

One example thrown out was Burlington Northern where the average locomotive might last 15 years and track might last 30 years. If we think in terms of only 3-5 years, it is no wonder our railroads are in such poor shape… although now that Burlington Northern is part of Berkshire Hathaway, maybe those pressures will lessen for them.

Some pension funds turn over 9 times a year but their payout is in 20 years.  Germany and Japan appear better at encouraging strategic long-term holders. Of course, a lot of their shares are held in big blocks.

The “owners” of public companies include short-term traders.  70% of trades are made by “high velocity” traders. We’ve made a choice that public companies are not being asked to make long-term investments, but is it a conscious choice? It is time we confronted the ownership question as some, such as the Aspen Institute are trying to do. Unless we tackle the problem through taxes, capital gains reforms or other initiatives, investment horizons of 3-5 years will soon look long-term.

Volatility is not desirable to investors as it may be to CEOs, whose tenure now often lasts only 5-6 years. “Quarterly capitalism” has been critiqued by Dominic Barton in Capitalism for the Long Term.  Although our legal rules do not support short-termism, it is tough to get busy directors to focus on the long-term when shareowners and reporters are focused on the next quarter.

Most(?) owners of stock are better characterized as renters. We need to change the incentives to encourage a more long-term perspective. Unfortunately, there is a disconnect between the stock price and the company, demonstrating what some termed a “lack of courage” by directors.  Even if they don’t have to worry about lawsuits, it is hard to ignore the pressures for short-term performance.

We should make it less attractive to “play” the market. We should reduce financial incentives that create churn. Mutual fund investors have the same problem. Owners seem to move their money to the funds that performed best last quarter, even though that is generally a bad strategy. The three year holding requirement in the proxy access rules may serve as a precedent for reducing the power of short-term owners.  There was a sense, at least in some quarters of the room, that CEOs might support measures to curb short-termism.

Leverage was discussed as an extraordinary influence. Managers may not be driving price; investor behavior may be just as important an influence. Leverage that is brought to bear may be as important as the CEO, with regard to stock performance. Stock options were the wrong device to incent alignment of managers with long-term share value.

Most corporations find it difficult to ignore the stock price. CEOs and directors become co-conspirators because of their investments in stock. We fell in love with alignment, but too many investors are looking for short-term results. Alignment with short-term investors is not in the interest of the company or the country.

Several believed we shouldn’t have any stock incentives. Let CEOs and directors buy shares with cash if they want to. (I’d say if they don’t, why should I have confidence in the firm. I can’t tell where they stand, however, when the are cashing out options that were provided in their pay packages.) Many, if not most, appeared to agree there should be disincentives to churn.

Financialization of the economy has become less a means to raise money for productive purposes and more of a way to speculate. The stock market is not an effective discounting mechanism but is more a playground for rich speculators. What you measure if what gets the results and we measure quarterly.

Instead, we need to monitor the board’s capital investments. What is their time horizon. (Was it someone in the room who came up with the thought or something that came to me as an activist shareowner? Maybe we need those who can call a special meeting should be limited to those who have held for at least a year? Can we measure 10% of those who have held for a year? If we could, would that disincentivize hedge funds from calling such meetings where they are really needed? Your opinion?)

Directors need to focus on the best interests of the firm. They can go long-term if they want, since they do have legal protection. Westinghouse v GE were compared, with GE taking the longer-term strategy. It was asserted that those that didn’t make it over last 50 years didn’t have a long-term plan that they stayed with. Your CEO should be out there talking to your long-term shareowners… telling the company’s strategy.

Stock price doesn’t necessarily relate to performance, especially since mechanical traders too often drive the market. Is it possible to go long-term? Is there any way to change our dependence on quarterly results and stock market signals? Our entire culture is too focused on short-termism. Leave debts and global climate change to future generations, “I want my toys,” seems to be the mantra.

On the flip-side, long-termism could be excuse for entrenchment.  Too often companies don’t have real long term plans.  They need to develop and sell the plan. Maybe we need to take away the vote of short-term owners altogether? How do you get that done? It seems an unlikely possibility. How do we create a new culture? How do we change thinking?

To stir the pot, one person said something to the effect that the inmates are in charge of the asylum — advocating annual elections, written consent, special meetings, etc. Again, my thought or did someone else raise it? — Say on pay — maybe we should vote down plans that are based on stock performance.

Another possibility was raised with regard to our culture’s short-termism. Maybe having all that information available all the time through Twitter, XRBL and other technological wonders will provide us with some degree of immunity… like living in a candy store. We might begin to take on responsibility because it will be so obvious that not doing so will have dire consequences. Do we reach a saturation point where we recognize that technology doesn’t hold the answer — when we must then turn to values?

Personally, I’d like to believe so, but this is a dilemma as old as time… Eve and Adam, Pandora. Adam Smith entered the field of economics by questioning human greed. Economist Frank Knight thought it was human nature to be more dissatisfied the better off we are. As Tomas Sedlacek contends in the Economics of Good and Evil: The Quest for Economic Meaning from Gilgamesh to Wall Street

, “we have chosen the hedonist program (increasing the supply of goods) over the stoic (decreasing the demand of goods).” That doesn’t bode well for sustainability.

One take-away underlying much of the discussion that I didn’t draw out specifically above was the point that many companies are just too big to manage. We should downsize companies that are beyond our capacity to understand or we will spend too much time assessing risk and not enough time investing in long-term projects that have a good chance of paying off. The biggest take-away for me: Paying in stock is a problem (possibly the root of all evil with regard to CEO pay). Background reading: The short long – Paper by Andrew Haldane and Richard Davies and speech.

As we broke before the next panel, I wondered if the answers would be forthcoming. Even if not, we were starting out with some very important questions. Now for photos of the other panelists. (Apologies for blur and unflattering shots but it is hard to take good photos and good notes at the same time. Next year, I’ll bring a small camera and sit in the front. We’ll see if that works out any better.) 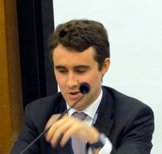