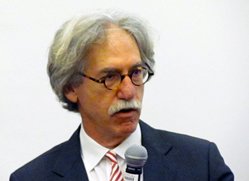 The second session of the second day of the Yale Governance Forum 2011 was held under Chatham House Rule. Panelists were announced in advance, so that is no secret, but under the rule those reporting must not attribute what was said to specific individuals on the panel or in the audience. Stephen Davis was the moderator. Kerstin Jorna, Bernadette Kelly and Gregory Lau were panelists.

What you’re getting here is largely my take-away, complete with all my own personal bias, rather than an accurate reflection of what actually was said.

Who is corporate governance meant to serve? We all know it is not a national affair but is international. We had a “that’s not what we intended moment” when a Chinese company refused to accept a vote by a shareowner that went against management. (I’ve heard of this(these?) instance(s?) several times. Anyone have a reference?)

As far as I am concerned, the panelists soon veered off the general topic of what corporate governance is for and went into specifics that I’m not really su report re how to under the Chatham House rule. One thread revolved around government supervision and financial reform, with recognition that managements had failed. As the same time, there were concerns about over-regulation. One example was that it apparently costs ten times as much to get a patent in Europe as it does in the US. The European Commission has a  Green paper on the EU corporate governance framework the is out for comment until July 22

Many issues were discussed: comply or explain, group think, diversity, renumeration risk, short-termism, churn, principle and agent relationships, employee input, enforcement, quotas vs flexibility.  The driving motive appears to be to restore public trust in the single motive, which in the US appears to be maximizing shareowner value. 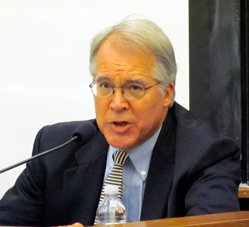 Economic growth appears to be just about everyone’s 1st priority, so corporate governance must serve that end.  Failure of the financial sector doesn’t seem to have led to questioning the whole corporate model. Concerns were expressed on the accountability of companies to shareowners as globalism weakens investor engagement and with faster share turnover. Investment chains are longer and more complex and there is over-emphasis on short-term earnings.

The case of Kraft’s takeover of Cadbury was, perhaps, more evidence of short-termism, rather than an example about the problems of foreign takeover. Private citizens and companies owe a wider responsibility to society. We need greater transparency and alignment and to better clarify pay incentives.

There was discussion on how CEO pay is rising in both Europe and the US in comparison with average worker pay, which is stagnate — where there are jobs. Extensive discussions are needed around what business and fund leaders want. The Aspen Institute was cited as a prime example of what is needed.  Recent proposals on women business leders. Government and regulators have a powerful role but what is really needed is a push by business and investor communities. 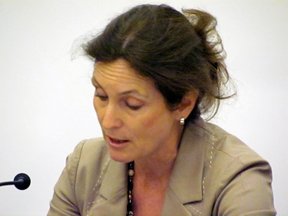 GM’s principles on corporate governance continue to evolve. We’ve written so much in the CD&A that now it is overkill — too much depth. I know that is the way I feel when I read them. Simplify. However, I’m not impressed by contentions that the global ratio pay ratio between CEOs and workers is impossible to calculate. This is a meaningful comparison that everyone can understand, unlike the current CD&A.

Shareowners should be policing market, balancing risk and growth. Again, problems of investment chains being too long. We have 7 month share-owners but 3-4 year product cycles. Tough to align in our fast-paced tunes. Companies will be attempting to draw in long-term investors.

All agreed that we need to better align executive pay with company performance. Discussion around broadening the membership of compensation committees? (labor or employees on compensation panel) With regard to transparency and say on pay, there may have been  unintended consequences. More disclosure may have resulted in bidding up pay. 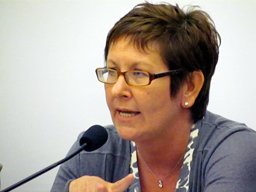 Unless investment professionals buy in, corporate governance as a movement won’t be effective.  We need a change of mind and now is our opportunity, following financial crisis. Start with the banks.

There was a discussion around how to incentivize long-term holding.  Trading tax? More voting rights the longer you hold? Several thought stock options were a bad idea all around. Should we move from reporting quarterly to reporting over the business cycle? Will we be looking at more narrative reporting, more strategic reporting? One lesson: Disclosure can obfuscate, as well as illuminate.

How can a broader public be engaged, beyond shareowners? There is a big gap between what we do and how people live everyday. We need to go way beyond technical issues. The public has a hard time trusting corporations and regulators. Yet, it is difficult to sustain public engagement. Is the heart still transparency and disclosure? Report on CSR?

Although I’m not sure the panel really covered the topic of what corporate governance is for or had the answers but they certainly touched on many important topics. Such discussions are the beginning of consensus. Hopefully, we’ll be building on these conversations with other participants between now and next year.

What is corporate governance for?