Only 11 of 88 major insurers surveyed recently have formal policies in place to deal with growing climate change risks, according to a major new report issued today by Ceres.  The report was to have been delivered at a conference of the National Association of Insurance Commissioners (NAIC) that was cancelled due to Hurricane Irene.

The new report, Climate Risk Disclosure by Insurers: Evaluating Insurer Responses to the NAIC Climate Disclosure Survey, analyzes what 88 leading U.S. insurers are saying about climate change in public filings with state insurance commissioners – and the extent to which they’re factoring it into their business models. The report is the first attempt to analyze responses by insurers to a mandatory 2010 survey. The disclosures were filed with insurance regulators in six states: New York, New Jersey, California, Oregon, Pennsylvania and Washington. According to Ceres President Mindy Lubber.

The findings are both illuminating and disillusioning. While the survey revealed a broad consensus among insurers that climate change will have an effect on extreme weather events, few insurers were able to articulate a coherent plan to manage the risks and opportunities associated with climate change.

“I am pleased that California played a key role in the development and implementation of the Climate Risk Disclosure Survey,” said California Insurance Commissioner Dave Jones, who co-chairs the NAIC’s climate change task force.

means that investors – and regulators – have been flying blind, without a solid sense for whether the industry is taking the steps necessary to understand and respond to this profound risk. Our fear is that climate change poses a fundamental threat to the long-term availability and affordability of insurance. This has tremendous implications for the economy and that is why we, as investors, are focusing so acutely on this sector.

Some of the largest players in the industry – particularly in property and reinsurance – are in fact investing considerable resources in understanding the risks and developing strategies that may drive more climate-resilient underwriting practices and capital decisions. But the survey revealed that the smaller players that represent a large percentage of the industry are doing little. Of particular concern to regulators, the most vulnerable companies tend to be within the market segments that are closest to consumers.

As the report points out, climate change is altering the industry’s global business landscape and threatens to undercut the risk models on which it depends. Impacts that threaten the industry’s financial underpinnings include rising losses in the US and globally from a wide range of perils – including wildfires, floods, prolonged droughts and hurricanes; growing financial exposure in the health and life insurance segments from longer, more frequent heat waves and expansion of disease vectors like mosquitoes and ticks; and ever-increasing liability claims, including more than 120 lawsuits in 2010 alone, most of them in the US.

While the survey reveals that most insurers are focused on the coastal impacts of climate change, this year’s events have revealed that climate risks extend far inland. According to the National Weather Service, before a single hurricane made landfall this year the United States had already tied its yearly record for billion-dollar weather disasters and the cumulative tab from floods, tornadoes and heat waves has eclipsed $35 billion.

These trends have implications far beyond the industry’s financial viability. If insurers don’t respond in a timely way to the business impacts of climate change, the report warns, insurance availability and pricing could be affected – and with it the ability of consumers, businesses and government to productively employ capital. Beyond that, the performance of the industry’s vast $23 trillion global investment portfolio could be compromised as well, which in turn re-amplifies the macro-economic threat. Said Sharlene Leurig, a senior manager of Ceres’ insurance program who authored the report,

These developments clearly point to a business model that must change. The report paints a picture of an industry that, outside of a handful of the largest insurers, is taking only marginal steps to address an issue that poses clear threats to the industry’s financial health, as well as to the availability and affordability of insurance for consumers.

To the extent that a relatively small number of companies are paying attention to climate change their efforts were almost exclusively focused on catastrophic coastal impacts and hurricanes. Yet recent years have demonstrated that climate change may be driving up aggregated losses from smaller, non-modeled events – perils such as floods, droughts, snowstorms, hailstorms and tornadoes – in ways that severely cut into insurer profitability.

In addition, legal developments related to climate change are driving up liability claims for many insurers in the U.S. 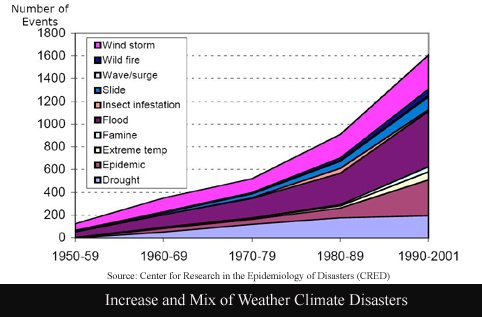 The 2012 proxy season may see the number of resolutions at insurance companies on this hot topic rise even faster than insurance rates. Think what the graph would look like if it were updated. Yikes!