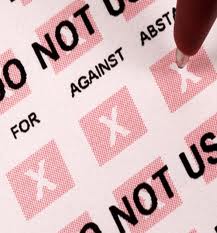 The time has come for shareowners to be allowed to include their own nominees for corporate boards in the proxy materials their corporations send out every year—so-called “ballot” or “proxy access.”

The current system—that only allows shareowners to vote for candidates nominated by the current board—is absurd. The SEC has finally reaffirmed shareowners’ right to submit proposals to corporations that, if adopted, would allow proxy access for those corporations’ shareowners.

A number of such proposals will be submitted for votes at 2012 annual meetings, but the wording is important. Some large institutional investors plan to submit proposals to grant proxy access but I anticipate they will require high thresholds of ownership that will be difficult for even the largest investors to meet. What about the rest of us?

If individual investors—not to mention small and medium sized institutional investors—want proxy access for ourselves, we are going to have to submit our own proposals. Let’s take the lead and make it happen.

I’ve written a draft proxy access proposal (see below). I have also formed a members group on the United States Proxy Exchange website, where we can discuss the draft, make changes, and agree on a final version. Then we can each submit that proposal to corporations we own that are badly in need of new independent board members. To get involved, visit the Proxy Access Group to sign up for membership. Also, send me your e-mail address at jm@corpgov.net, so I can distribute a complete e-mail list to group members. If you are not yet a member of the USPX, join now.

Proxy access will allow shareowners to nominate and elect directors with new perspectives and skills. This will move us from corporate governance version 1.0, where shareowners beg for changes through advisory proposals, to version 2.0 where we can count on board members to represent our interests. Help us design the framework so that we can hit the install button during the 2012 season.

Below, I give background information, present my draft, and provide more information on the new members group.

Proxy statements are legally company documents, not management documents. As such, access to the proxy for the purpose of listing director nominees should be available to all shareowners, not just the board’s nominating committee.

In 1977 the SEC held a number of hearings to address corporate scandals. At that time, the Business Roundtable (BRT) recommended amendments to Rule 14a-8 that would allow access proposals, noting such amendments

… would do no more than allow the establishment of machinery to enable shareholders to exercise rights acknowledged to exist under state law.

Soon, we saw several proposals. In 1980 Unicare Services included a proposal to allow any three shareowners to nominate and place candidates on the proxy. Shareowners at Mobil proposed a “reasonable number,” while those at Union Oil proposed a threshold of “500 or more shareholders” to place nominees on corporate proxies.

One company argued that placing a minimum threshold on access would discriminate “in favor of large stockholders and to the detriment of small stockholders,” violating equal treatment principles. CalPERS participated in the movement, submitting a proposal in 1988 but withdrawing it when Texaco agreed to include their nominee.

These early attempts to win proxy access through shareowner resolutions met with the same fate as most resolutions in those days. As of 1986, only two proposals of the thousands submitted had ever been approved—but the tides of change were turning. A 1987 proposal by Lewis Gilbert to allow shareowners to ratify the choice of auditors won a majority vote at Chock Full of O’Nuts Corporation and in 1988 Richard Foley’s proposal to redeem a poison pill won a majority vote at the Santa Fe Southern Pacific Corporation.

In 1990, without public discussion or a rule change, the SEC began issuing a series of no-action letters on access proposals. The SEC’s about-face may have been prompted by fear that “private ordering,” through shareowner proposals, was about to begin in earnest.

Tensions over this giant leap backward rose until AFSCME v AIG (2006). That case involved a 2004 bylaw proposal submitted by the American Federation of State, County & Municipal Employees (AFSCME) to the American International Group (AIG) requiring that specified nominees be included in the proxy.  AIG excluded the proposal after receiving a no-action letter from the SEC and AFSCME filed suit.

The court ruled the prohibition on shareowner elections contained in Rule 14a-8 applied only to proposals “used to oppose solicitations dealing with an identified board seat in an upcoming election” (also known as contested elections).

The SEC subsequently adopted a rule banning proposals aimed at prospective elections. But in 2010, the commission adopted both a new Rule 14a-11, specifying a minimum proxy access requirement for all public corporations, and amendments to Rule 14a-8(i)(8) to allow shareowners to submit proposals for more robust proxy access.

The US Court of Appeals for the DC Circuit found the new Rule 14a-11 “arbitrary and capricious.” This means our only current option for achieving proxy access is through shareowner proposals filed on a company by company basis under the amended Rule 14a-8.

The USPX members group I am forming will

I welcome your participation. If you are not already a USPX member, hit the join now button. Once you sign up you will be able to see and join groups. Proxy Access is one of them. We will be communicating with various web-based tools, e-mail and by phone.

While actual shareowner proposals will contain a statement demonstrating the need for proxy access and company specific arguments, we will first concentrate on the “resolved” language and point-by-point justification. Below is my draft “resolved” language. I am sure group members will offer plenty of improvements and am looking forward to working together with others concerned with this keystone issue.

RESOLVED, Shareowners ask our board, to the fullest extent permitted by law, to amend our bylaws and each appropriate governing document to:

Since the timeframe for submitting proxy proposals is rapidly approaching for many corporations, time is of the essence. Additionally, I will be traveling for several weeks beginning the second week in November. Therefore, I would propose that we have the first phase of work done (model “resolved” language) by November 5th. Hopefully, the group can reach consensus by then.

Of course, with or without consensus, anyone is free to use the language however they want. After November 5th I would hope the group can move on to identifying possible targets and submitting proposals. Key will be choosing targets where shareowners already recognize a lack of board leadership and will be ready to vote for change.

Again, here are the links you need to join the USPX and then join the new  Proxy Access members group. At the members group you will see a topic for each of the nine resolved points above, as well as one for general comments that fall outside those categories. Please post comments by category. Don’t forget to e-mail me at jm@corpgov.net, so I can add your e-mail address and phone to the master contact list.