Why are corporate employees unwilling to report serious misconduct?

Why are they also frequently unwilling to share good ideas for improving products, services and business processes? Fear of retaliation is most often cited for the failure to report misconduct; a sense of futility for the failure to suggest improvements. All too often, employees have a low level of trust in both management and the board.

The panel, which met in the morning at

SVNACD and in the afternoon at Stanford’s Rock Center for Corporate Governance, examined how the presence of a governance ombudsman can change the climate of non-participation and foster a culture of trust and candor.

The panel took off their ties for the Stanford event. They also answered more questions at Stanford, but they didn’t often come from students, and the panel was interrupted more frequently at SVNACD. Two Stanford University ombudsman attended the event at Stanford. To my the best of my knowledge, no SVNACD companies use an ombudsman. Fruit, muffins and coffee contrasted with soda and pizza. Panel members were as follows: 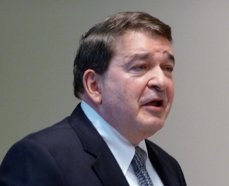 Pat Gnazzo spent 25 years at UTC, the last 10 of which as chief ethics and compliance officer, in which position he was responsible for the ombudsman program which addressed more than 56,000 employee issues. Pat also managed UTC’s ethics and compliance programs for all 200,000 employees in 180 countries. Since 2005 Pat has held this same position at CA, which came out of a deferred prosecution agreement in part because of the ombudsman program. 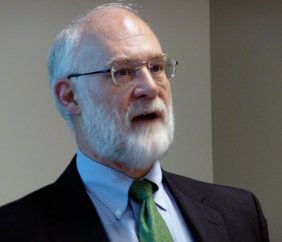 Chuck Howard has served as independent counsel for ombudsmen at major corporations, universities and research facilities for more than 20 years.

Chuck is the author of The Organizational Ombudsman: Origins, Roles and Operations — A Legal Guide published by the ABA in January 2010. 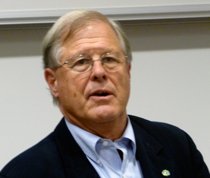 Jon McBride, a former executive recruiter who focused on identifying and attracting individuals to fill positions as independent directors, now has refocused his practice on corporate governance and on advocacy for the role of the ombudsman in corporate America. Jon is the co-author of Board Champions for the Ombudsman which appeared in the May 2008 issue of the NACD Directors Monthly.

Did you notice the lastest medal of honor winner disobeyed direct orders? That was a first and perhaps is emblematic of the culture of trust more likely to be seen at companies with an ombudsman. Do the right thing could be more important than going though proper channels.

The first proto-ombudsman (ombuds, ombudsperson, or ombudswoman) may have been in China during the Qin Dynasty (221 BC) but in the modern era originated in Scandinavian countries as a stand-in for the king in the 11th century. Generally, there are three types:

Sarbanes-Oxley, the NYSE, and NASDAQ mandate that companies provide channels of communication for “whistleblowers” where they will be free from retaliation. The U.S. Sentencing Guidelines stipulate the same thing. In response, boards have instructed management to establish a plethora of formal internal functions, such as ethics, compliance, internal audit, legal, and
human resources, or hotlines, among others. 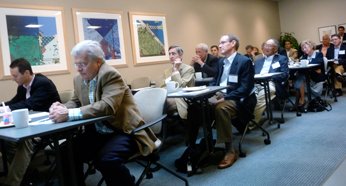 Staff, whether inside or contracted, in each of the above functions keep official records and often conduct formal investigations. If an employee reveals wrongdoing through formal channels, the organization is “on notice” and faces legal obligations.

In contrast, the organizational ombudsman is not an agent of management, does not make or enforce policy, perform formal investigations, and may not even keep records. They are there to to listen, help analyze options, and coach employees. Based on sensitive information and statistical trends, they are in a unique position to identify areas of weakness and provide recommendations. A 2007 National Business Ethics Survey (NBES) found employees three to ten times more likely to report to an ombudsman than a hotline.

82% of the whistle blowers reported being subjected to various pressures by the company in response to their complaints. For a substantial portion, the financial consequences were devastating. All in the study sample received a share of the financial recovery, ranging from $100,000 to $42 million (median of $3 million in 2009 dollars).  Although the settlements helped alleviate the costs of the litigation such as moving and/or divorce, the prevailing sentiment was that the payoff had not been worth it.

None of the panelists appeared to advocate doing away with formal channels but all recognized the value of adding an organizational ombudsman.  Confidentiality is perhaps the defining characteristic of the function. Although there generally aren’t specific laws protecting their confidentiality, it has been repeatedly asserted and won in court, so case law is piling up on the side of ombudsman.

The ideal ombudsman, one said, is someone everyone knows and trusts who has worked for the company for 30 years and plans to retire in five. When an employee reports up the chain or through a hotline, they rarely get the followup questions that are needed to really identify what is going on.  If you put the ombudsman program in place correctly, you don’t need to know who brought an issue forward. As directors, you just need to know the types of issues brought up (90% or more will involve HR) and that the issues raised are being addressed.

The average time to recovery in False Claim Act cases is almost five years. FAQs.  Many whistle-blower laws are very complex. Financial rewards are a long-time coming, if they come at all. Employees may have to provide original information but how are they to know if it is original. Ombudsman can help filter and or guide employees to get to resolution much quicker. That’s good for them and good for the company.

Q: What should the relationship of the ombuds be to the audit committee chair? A: Generally reports to senior management but with a dotted line access to audit committee chair. They would report statistical trend analysis to the committee and take issues there if they doesn’t get resolved internally. Another opinion: If reports to the board, they’re in the governance budget. That’s better than reporting to management.  Ombuds is not bringing issues to the board but taking issues to management to resolve. Never ask for names. Issues get investigated, not names.

Q: Who ensures no undo influence? A: Charter guarantees access to senior management and board. The level of person varies. Best pick someone senior who is steeped in culture… more important than training. Multinationals may have 4 or 5 around the world.

Q: Coach or resolve issues raised? A: Variation; either. Employee retains control. There will be instances where ombudsman notices to company. For example, if imminent threat, they would have a duty to report. They are trained to work the employee through the issue. The ombuds can’t make them come forward. Another important function is to filter out the nonsense.

Q: Small to midcap; does it make a difference?  A: Ideally the ombuds is inside but a small company can have an external contract ombudsman. They be more independent but will need to get to know the culture. There are tradeoffs. You might think about hiring a retiree from the company.

Q: Applicable to government agencies. Yes, in many jurisdictions there is a balancing of interest. For example, under the Freedom of Information Act there is a provision exempting certain material falling under the provisions of the Dispute Resolution Act. While use of an ombuds is included in the statutory definition of an “alternative means of dispute resolution,” it may not cover all ombuds activities. In other words, its complicated.

Stanford Rock Center: From Dangerous Silence to Culture of Trust