These are some relatively quick notes that I’m sharing from the Corporate Directors Forum 2012, held on the beautiful campus of the University of San Diego, January 22-24, 2012. Since I am busy with no-action requests this proxy season, this post may be a cryptic… not complete sentences bt hopefully mor intelligible thN txt msgN. 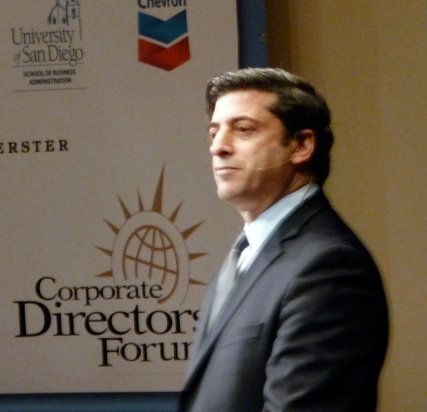 Since arriving at the SEC, Khuzami has flattened the management structure by cutting an entire level. The SEC has had few sticks and carrots.

Reward has too often meant promotion. He has now doubled the staff to management ratio and has moved to a matrix organization, hoping to optimize deployment of resources.  They’ve created a COO function (to handle workflow, project management, HR, etc.) and are now using dashboards and metrics to make resource allocations.

A new office of market intelligence handles tips. It sounds as if they are finally employing statistical analysis. One example he gave was benchmarking asset managers and looking for outliers. Whose returns were static? Maybe that’s a sign of a ponzi scheme. His intention is not to wait 18 months for a fund to blow up. They’re actually looking through filings and trying to find lies in the disclosures.

They also have a compliance initiative to determine if  brokers have adequate compliance in place. The hope is that people across sectors will take notice and scrub their own operations. Guarding against sophisticated accounting frauds, false valuation of mortgage assets, hedge fund trading through undisclosed information.

He is stressing cooperation in helping investigations — disciplining within own ranks, compensating victims, turn over results of internal investigations. The business case for cooperation is quite clear. Those who cooperate are rewarded in a host of ways – from alternative views of appropriate charges to inferences from the evidence. It is common sense if a company is cooperating, they will benefit from inferences, determining penalties, deferred prosecution agreements, non-prosecution agreements.

Must disgorge and disclose. The many benefits to cooperation include reducing outside council expenses. You can earn substantial credit through investigation and cooperation.

Regarding Citigroup, the SEC can’t put people in jail. They can get disgorgement but not money back to investors. Penalties. SEC can’t get restitution. There is a proposal to Congress to get three times disgorgement. The SEC’s remedy is getting them to stop ongoing fraud. But often the fraud is over and done with, so it feels like a toothless remedy.

The “no admit, no deny policy.” The SEC’s long-standing practice has been allowing defendants to enter into settlement agreements without admitting or denying wrongdoing.  A typical SEC settlement provides a detailed recitation of the SEC’s allegations in the matter, followed by a statement that the defendant “without admitting or denying the findings [t]herein, except as to the Commission’s jurisdiction over it” consents to the entry of the settlement order.

The practice has been justified as serving to balance the SEC’s interest in compensating harmed investors without years of courtroom delay and without the risks of losing at trial or recovering less than the settlement amount, with the defense bar’s interest in ensuring admissions of violations will not be used against them in subsequent civil lawsuits.

The long-standing practice recently come under significant criticism.  In SEC v. Citigroup Global Markets, Judge Jed S. Rakoff of the Southern District of New York was faced with a typical “No Admit, No Deny” provision and refused sign-off on the settlement. Rakoff concluded that without any proven or admitted facts the court could not approve the settlement, stating:

The SEC’s long-standing policy – hallowed by history, but not by reason – of allowing defendants to enter into consent judgments without admitting or denying the underlying allegations, deprives the court of even the most minimal assurance that the substantial injunctive relief it is being asked to impose has any basis in fact… An application of judicial power that does not rest on facts is worse than mindless, it is inherently dangerous… If its deployment does not rest on facts – cold, hard, solid facts, established either by admissions or by trials – it serves no lawful or moral purpose and is simply an engine of oppression.

In response to this opinion, Khuzami issued a statement contending that Rakoff committed a legal error by announcing a “new and unprecedented standard that inadvertently harms investors by depriving them of substantial, certain and immediate benefits.”  He further contended that Rakoff’s opinion was at odds with decades of court decisions across the country that have upheld similar settlements by federal and state agencies.  Khuzami went on to articulate several justifications for the SEC’s “No Admit, No Deny” settlement policy, including:

The SEC has appealed Judge Rakoff’s decision in the Citigroup case to the Second Circuit Court of Appeals.

Khuzami announced a new policy that will no longer allow “No Admit, No Deny” language in settlement agreements where the defendants: (a) have been subject to parallel criminal proceedings and have pled guilty, (b) have been convicted in a parallel criminal proceeding, or (c) have entered into an NPA or a DPA which contains admissions or acknowledgments of criminal conduct.  Instead, the SEC will now include the “fact and nature” of the criminal conviction, NPA, or DPA in the SEC settlement, and the defendant will be prohibited from denying that fact.

However, this new policy is unlikely to have a substantial effect on SEC enforcement actions.

As a practical matter, this new policy appears likely to have two significant implications on companies that are subject to parallel criminal and SEC investigations.  First, companies will likely attempt to settle actions with the SEC before settling criminal proceedings, in an effort to avoid the incorporation of admissions or acknowledgment of guilt in the SEC settlement.  Second, where a company has settled a parallel criminal proceeding before entering into a settlement with the SEC, the company will have to consider the collateral effects such action may have on the SEC settlement, and on related derivative, class action, and other private litigation.

Companies don’t have to admit but they are prohibited form denying. In our case we can’t deny. There is no lack of public accountability. The SEC is not afraid to take cases to trial. “We are prepared to litigate. That’s why corporations are willing to settle.”

Questions were raised by audience members with regard to News Corp and the Foreign Corrupt Practices Act. These couldn’t be answered directly, since he can’t talk about ongoing cases.

Another question asked about new financial instruments that fail… How do you address what’s coming? Having industry experts on board, communicating more, outreach. The SEC don’t pass on the safety of products, only on disclosure. There is an initiative in CorpFin to simplify disclosure to make it more intelligible.

He also discussed how lessons learned is fed back into new rules and disclosure requirements. Specialized units bring experts…. makes it more of a one stop shop to find the experts and get answers. One of the great virtues is process. Cases get circulated to other divisions. Others scrutinize the action memo. They also go up to the Commission and their counsel. Enforcement calls in other division experts. Enforcement also reviews new rules for enforcement friendliness. Trends meetings are now held that get divisions together to learn about what’s going on and to determine meaning.