These are some relatively quick notes that I’m sharing from the Corporate Directors Forum 2012, held at the University of San Diego, January 22-24, 2012. This post may be a cryptic… incomplete sentences bt hopefully mor intelligible thN txt msgN or Tweets.

Chatham House Rule prevailed, so there are no direct quotes below but you should get some sense of the discussion. 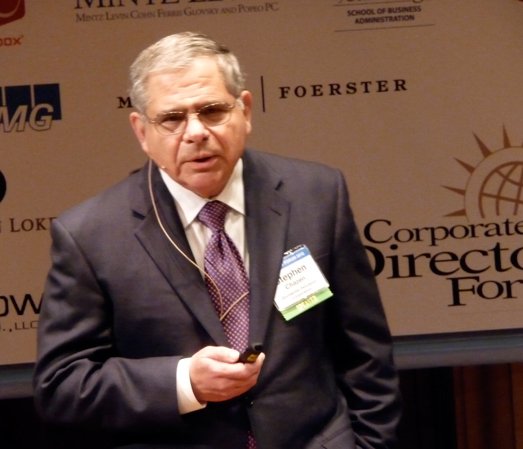 SRI involvement has been a reaction to things that happened over the years. In the mid-80s they had a serious accident in the North Sea. That changed the culture of company with regard to the environment and safety. Evolution of technical skills has been similar.

Occidental focuses on training locals for the job. You’ve go to convince the country to accept you because you are a guest and could be uninvited. There has been more independent board oversight since North Sea incident. They have a code of conduct and human rights. The board’s role is to ensure management knows it is important. Community engagement; they buy fire engines and ambulances that might be rescuing their own employees. That helps brings them a competitive advantage. The board looks at each plant.

Political advocacy – board reviews and approves all political contributions for the last 20 years or so. They give in communities in which they operate in… not so much nationally. Due to the regulated nature of their business, they spend time educating members of legislature.

Shareowner engagement – visits sizable shareholders. They are forthright. Had a pay issue. Engaged with shareholders. They had voluntary say on pay vote in 2010 and lost. Too much money. 52% voted against. It was probably more a succession issue rather than a pay issue.  They had age 75 retirement issue and it was continuously waived. They reduced pay, changed succession and got a 90% affirmative vote.

Often the question isn’t about management, it is about boards not keeping mgt in check. Occidental way more growth… almost 800% in 10 years, way better than S&P, ExxonMobil or Berkshire Hathaway. Global warming corporate view. We do everything we can to reduce our footprint. US can’t continue to consume the amount we consume now. It will decline. Try to do it efficiently.  They buy wind power.

Compensation. What’s different? Board didn’t understand performance would be so much better than what was expected. Stock ranged 7.5 – 15. They didn’t think about the stock growing to 90. They had stock-based compensation so it went up a lot. That is less likely now because of size of enterprise. 18 years ago pay was not performance based. Bonuses were based on how well company did. Combination of luck and fortunate decisions led to dramatic increase. Now they have a better understanding of possible outcomes. Investors want performance based but the total can’t be too much. Says his compensation isn’t a very important part of his life. He doesn’t spend a lot of time thinking about it.

Fracking has been going on for a very long time. It used to mean a litte water & calcium chloride and pressure to break up rock. During the last decade higher pressure has been use but the reservoirs well below water table. The disclose what’s in their fracking fluids but they don’t have much. It has to be done responsibly with full disclosure.

If you damage something, paying for it can be expensive.  Their minimum horizon is 5 years. They try to look out a decade. However, their scale is much smaller than Shell and other giants.  Views the price of the product is a main driver. Focused on 4-5 year total shareholder return. Accidents are most problematic. You can’t buy enough insurance to keep from going under. Oil price fluctuations are not as much of a killer. The company can’t afford a serious error.

Hasn’t met with proxy advisors but he reads what they say and takes some of it to heart. At other times he wonders why Occidental was put in a same peer group of someone selling bunker fuel in Miami harbor. The written material is often better than numbers.

FPPCA issues raised from the audience. You can run a business under US standards.  If you can’t, don’t go there. People want jobs. If you provide them with good legitimate jobs, it works.

Overall assessment: The Forum keeps getting better and better. There are lots of networking opportunities. I like the mix of local and national, directors and investors, as well as the perspective of various advisors. I felt we got a little more management perspective this year and the organizers seem to have pushed a little harder to get some more excitement, cross-fire type discussions.

“Collegiality” seems to have been the word with the most buzz as a means for covering up bad corporate governance practices. Some collegiality is great; too much, when it becomes deferential, can lead to serious problems. Even Warren Buffett acknowledges his own failings as a director, particularly in approving excessive compensation. In 2003 his annual letter to the shareholders of Berkshire Hathaway Inc. included the following:

after sitting on 19 boards in the past 40 years… Too often I was silent when management made proposals that I judged to be counter to the interests of shareholders.  In those cases, collegiality trumped independence…  A certain social atmosphere presides in boardrooms where it becomes impolitic to challenge the chief executive.

If Warren Buffett is too inhibited to disrupt notions of collegiality, something is wrong.

The other term I’ll take away is Donna Anderson’s “governance-industrial complex.” We were in the thick of it at Corporate Directors Forum 2012 and I won’t miss 2013.