These are some relatively quick notes that I’m sharing from the Corporate Directors Forum 2012, held at the University of San Diego, January 22-24, 2012. This post diverges to a flight of fancy inspired by a problem raised by judge J. Travis Laster at the Forum… a flight of fancy that borders on nightmare. In part 8 I promise to get back to reality and actually report again on the Forum. 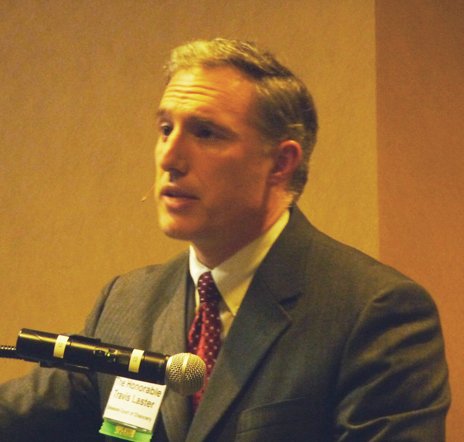 I didn’t take a lot of notes during Laster’s fascinating talk. He discussed several cases. One I recall was Southern Peru Copper Corporation Shareholder Derivative Litigation where the court granted a $1.3 billion judgment, plus $0.2 billion interest, for breach of fiduciary duties. I can’t retell the story here but it was an example of how litigation done right adds value. This was no borderline case.

Laster discussed the fact that almost half of all cases are now filed in multiple jurisdictions. Most are ambulance chasers (my term, not his). If Delaware doesn’t approve a settlement, the venue shifts. Plaintiffs look for the most favorable venues. See Chancery Stays Derivative Action in Favor of Federal Securities Class Action, which demonstrates a degree of restraint at the Chancery.

He advises fixing the PSLRA and thinks companies should consider limiting suits to one jurisdiction named in their charter. Now law firms are racing to court to file before they have any real evidence.

He discussed confirmation bias, cognitive bias, and group think, with contrasting examples of the Bay of Pigs invasion and the Cuban missile crisis. Every board should decide how to decide. Set up a process that gets debate and avoids the perils of “collegiality.” (There’s that term again — very popular at the Forum.) Get alternatives and hear the debate in front of you (that’s something judges are lucky to have). Boards should be diversified so they include a variety of perspectives. Include someone who thinks $10 million or even $1 million is a lot of money.

Regarding the DC court’s judgement on the SEC’s proxy access rule, he doesn’t understand it and thinks it probably should have gone to appeal. What we need now are more proposals coming from the company side.

People follow their incentives even if it imposes costs on clients. Lots of great stories but I kept thinking about the multi-forum problem he raised. It brought to mind a recent case in Southern California where a Honda Civic owner opted out of a class action lawsuit and took Honda to small claims court.

After the talk, I discussed the following scenario briefly with Judge  Laster, which I think he quickly dismissed as an unlikely nightmare. I’m just tossing out an idea here. I’m certainly not advocating it at this point but indulge me; follow my imagination. Consider the nightmare.

Maybe you’ve seen the site Don’t Settle with Honda. According to the disclaimer, “DontSettleWithHonda.org is informational only, Heather Peters is not a lawyer and is not offering legal advice. Don’t Settle With Honda is a story of one woman’s journey, different states have different rules and your facts differ.” Consider yourself given the same kind of warning concerning the idea of a suing for stock losses on the basis of fraudulent statements made by companies. According to a press release from Ms. Peters (now out of date),

Honda is on the brink of settling five class action lawsuits alleging false advertising of 50 MPG for its Civic Hybrids for pennies on the dollar, but one small claims case gone viral could change all of that and leave Honda facing liability of $2 billion instead and defending itself in thousands of small claims courts across the nation.

A front page article in the Los Angeles Times used the term “a small-claims flash mob” to describe the filing of a single small claims case against Honda in Torrance. As of yet, I know of no real “flash mob” but that could change.

Would 200,000 other disgruntled Civic Hybrid owners be better off turning down $100-$200 in a proposed class action settlement (where lawyers get $8.474 million)? Sure, they can take Honda to small claims court, where at least in California lawyers are not allowed.  Peters won almost $10,000, the California small claims limit, for the “hybrid premium” she paid over the sticker price, her increased costs of gas due to getting just 30 MPG and the reduced resale value of her car.

According to Peters, a former corporate defense attorney:

Class actions are great for little cases, but not for cases like this where Honda’s false advertising is costing already cash-strapped families more every day at the gas pump. It’s time for Honda to go one on one with its customers where they can’t hide behind high priced lawyers. I want people to know that small claims court is not so scary, it’s a lot like Judge Judy.

Small claims court is one of the truest remaining forms of personal participation in our legal system citizens can have. They provide access to the court system for those that cannot afford attorneys or have claims that just aren’t financially feasible for attorneys to handle. In addition, in most jurisdictions, the formalities of the rules of civil procedure do not apply unless stipulated to, so that the lay person does not have to worry about getting caught up in the technicalities that the rules can impose.

In most jurisdictions, court personnel will assist people in completing the necessary forms. Typically speaking, actions brought in small claims courts can be resolved through trial or settlement in under 90 days.

Could the same strategy be applied by shareowners of Netflix (NFLX), for example? (I wrote this weeks ago before the value of NFLX surged.) Here’s an example of the type of case where it might apply and if it does, could create something of a “flash mob.”

According to the Stanford Securities Class Action Clearinghouse, a class action filed by Robbins Geller Rudman & Dowd LLP (San Francisco), alleges that during the Class Period (12/20/2010 – 10/24/2011), defendants issued materially false and misleading statements regarding the Company’s business practices and its contracts with content providers. As a result of defendants’ false statements, the Company’s stock traded at artificially inflated prices during the Class Period, reaching a high of almost $300 per share on July 13, 2011. Plaintiffs assert that
at the same time, Company insiders were selling 388,661 shares of their own stock for proceeds of $90.2 million.

On September 15, 2011, the Company updated its third quarter 2011 guidance and revealed that it had lost a million subscribers due to its recently announced price increases becoming effective. On this news, stock prices fell nearly $40 per share to close at just under $170 per share. On September 19, 2011, the Company announced that, in an effort to offset skyrocketing costs and rapidly defecting customers, the Company would begin charging separately for its two services and had raised prices as much as 60%. The Company stock dropped to $130 per share on this news.

Then, on October 24, 2011, the Company issued its third quarter 2011 shareholder letter, which reported a net loss of 810,000 U.S. subscribers, translating into a cumulative loss of 5.5 million subscribers. The subsequently filed Form 10-Q revealed that the Company’s obligations for content over the coming years had skyrocketed to $3.5 billion, with $2.8 billion due within three years. These disclosures caused stock to fall from $118.84 per share on October 24, 2011 to $80.86 per share on October 27, 2011, a 32% decline in three days and a 73% decline from the stock’s Class Period high.

According to the complaint, the true facts, which were known by the defendants but concealed from the investing public during the Class Period, were as follows: (a) The Company had short-term contracts with content providers and defendants were aware that the Company faced the choice of renegotiating the contracts in 2011 at much higher rates or not renewing them at all; (b) content providers were already demanding much higher license fees, which would dramatically alter the Company’s business; (c) defendants recognized that the Company’s pricing would have to dramatically increase to maintain profit margins given the streaming content costs they knew the Company would soon be incurring; and (d) the Company was not on track to achieve the earnings forecasts made by and for the Company for 2011.

Netflix is probably a bad example, since the stock is now back up substantially. However, in theory, organizations like Shareowners.org or The United States Proxy Exchange could develop arguments, which could then be used by members to individually go to small claims courts, rather than joining together for shareowner class action suits. Will we see shareowner flash mobs in small claims courts? I think we will. Remember, you heard it here first.