Ben Christopher wrote a great profile of Mark Latham, highlighting some of his ideas and efforts around the voter media concept. (A Math Wiz’s Idea to Revive Local Journalism, The Tyee, 1/27/2012) 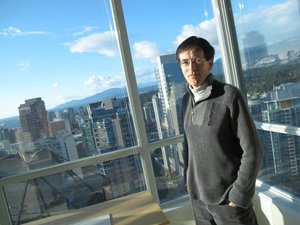 Mark Latham at home in Vancouver

Latham says the intellectual germ of what would eventually become Voter Media came to him in 1988, while lying in bed. Just a few hours earlier, Latham, then a finance professor at Berkeley, had been at dinner with a friend from his Ph.D. program at M.I.T. His friend was anxious, concerned about things he saw on the job as a financial analyst for a large Boston firm. The board of directors there, he bemoaned, routinely made decisions that would line the pockets of its own members, often at the expense of the company as a whole.

Unable to sleep that night, Latham came up with what he thought was an obvious conclusion.

In a large corporation owned by hundreds or thousands of shareholders, it makes little sense for any one shareholder to pay for an independent assessment of management, to ensure the executives running the company were in fact doing so in the interest of the owners. It would only make financial sense for everyone if the shareholders acted together.

Latham proposed a system whereby the shareholders vote to dip into the corporate treasure and hire an independent watchdog… as he began to write and speak and develop fellow believers on the subject, he realized the idea could be expanded, from corporate oversight to issues of corporate social responsibility and then, broader still, to the role that media plays in democracy…

A small municipal government (or newspaper, or non-profit) could, out of general revenue, make a lump sum available in the months leading up to an election. The financial lure would attract an auxiliary contingent of reporters, bloggers, and civic political junkies — watchdogs hired by the public to pay an extra bit of scrutiny to the often overlooked, and potentially unseemly, affairs of city hall.

It is a great article that even gives a simple explanation of the math algorithms that leads to allocating funds on a better than average basis. Videos and more tell where Latham and votermedia.org have been to date and where they may be going. Sponsoring a VoterMedia would be a great project for any alumni group. Let’s get the next generation interested in getting better coverage of elections and governance issues. Just contact Mark at Voter Media and he can set up the computer interface for your project.