In recent years, virtually all boards acknowledge that an annual board evaluation is required by “best practices.” How that evaluation should be done, by the board members themselves or by outside “experts” still remains an open matter. And whether these evaluations, either internal or external, are in most cases useful in improving board performance or in “weeding out” nonproductive directors, is also a matter open to debate. Which evaluation practices offer the best chance of improving board performance? Which offer the best chance of persuading a noncontribuing director to not stand for re-election? 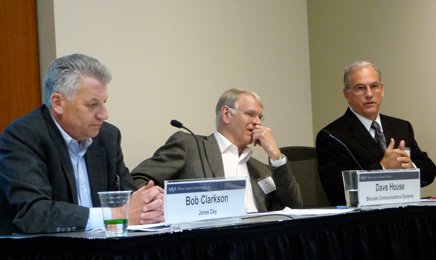 The panel of experienced board chairmen shared their experiences. Even more than other programs held by SVNACD, this one was largely driven by the engaged audience. As someone said, it was a little like a karaoke session… a few questions at first like shy volunteers, building to a crescendo of enthusiasm about the time the program was over.  The event was held under the Chatham House Rule, so no attributable quotes below, just some scribbles to get you thinking.

Board evaluations often move through a predictable progression: refusal, active resistance, passive resistance, check the box, several other steps but finally among man boards there is a desire for continuous improvement and being proactive. The process can help boards reach a consensus on what’s working, what’s not and what to work on in what order. It often induces a productive conversation about what directors want to see changed at the board level.

However, too much focus on individual reviews can create lack of trust. So, it is a delicate process. Interviews are often conducted by an outside neutral party. Overall board assessment should come fitst. With that grounding, directors will be more prepared to talk about individual issues. Use of an HR competent outside legal counsel can be very helpful. Moving from group to individual needs to be clear. If it comes off looking like subterfuge, when your ultimate goal is to move someone off the board, it won’t work. Deal with moving “Larry” off the board first.

Measurable benchmarks difficult to come up with. Boards hire and fire,  make sure systems are in place to avoid cheating (audit) and they advise and assist the CEO. Those tasks are difficult to make measurable. Here’s a practical suggestion. If using a numeric scale, make sure there are many choices.  Since we’re all “above average,” using a scale of 1-5 will yield an excess number of 4 and 5 ratings. At least 1-10 will often yield some more variety. Freshen your questions each year.

Attempts to reduce ratings to a number are often very difficult. Boards function as a group.  How individuals contribute is rather subjective… dependent on the view of the other board members. Push for verbatim reporting. It will foster a more thoughtful conversation. Pick one or two issues that are really board issues to be worked on and reported on. Consider this an opportunity to flag a problem and attempt to fix it. Evaluate the corrective action. Continue to watch an issue in subsequent years to ensure it doesn’t come back.

Compare year to year as to what got better or didn’t. How is management involved? Senior managers, like HR and CFOs, who advise board committees could be involved in the evaluation process, although it might be difficult for them to be as honest.  One discussed process of mailed questions, followed by one hour interviews with outside counsel. Counsel compiled and reported briefed chair, board, and committee chairs in that order. This year they didn’t include senior management supporting board committees but will next year.

One reason for using outside counsel is likelihood they are familiar with board, trusted by board and can invoke privilege. Much better than check the box approach. Chair’s role in feedback process? Facilitator; lead the board. Maybe “Larry” shouldn’t be on nominating committee if he is a problem. Who’s going to talk to Larry? Usually the Chair but it might be good to have two people talk to “Larry.” The Chair and head of the Nominating committee.

Chair has to make group of peers work where there is no boss. Personality issues, conflict not related to subject at hand. If you’re too quick, you’re a bully; too slow, a wimp. Summarize. Ask each director to talk about their position. Does this change your position? Hear comments again. Change of direction usually occurs only after adequate amount of conversation. If necessary, vote. If one director can’t get on board then you might need a conversation about their continued ability to contribute in disagreement.

Every transaction should be framed around fundamental vision and stragy. Every transaction should be framed so that directors get it and are in agreement. Celebrity board members? Lionized or pontificate based on no knowledge. “We’re not going to put nuns in the board unless they’re semi-conductor experts,” one joked. Agreement that diversity has its advantages but diverse member have to bring knowledge/skill sets.

Responses should be more than one liners. Bring comments back and have discussion. It may take a couple of rounds or even years to go to the next step. However, if you don’t have rigirous self-evaluations now, you are below average… and no board wants to be below average. Chair needs to strongly suggest use of verbatim reporting.

Chair might get a more detailed briefing. At end of every board meeting there should be a session without management. Chair meets with CEO after every meeting. All of the panelists believed CEO and board positions should be split… but that’s the way these panelists operate now. Another panel may be different. Consensus seemed to be that ISS has generally been a good influence to create a good conversation but it is also a blunt instrument with metrics that may be off. 60% is the new 75% with regard to peer comparisons. ISS has given boards “permission” to consider discussions a necessity.

Evaluations are conversation starters. People come with different expectations. Evolution is to 360 assessments for board members. Infuses view of strategy, performance. Wealth of information. Discoverable trail? Yes. That’s why it is often advisable to use a lawyer with HR skills, allowing them to synthesize. If risk of litigation high, they can cover it all under privilege. Outside counsel already trusted, knowledgable.

Don’t reward extra effort by directors after the fact. Set up mechanism for extra reimbursement based on the number of meetings, specific project, etc. in advance. Corporate Governance and Nominating Committee often creates questions, talks to Chair, back to board, outside counsel. Less is more.  After in-depth interviews, outside counsle sanitizes text format and chair presents to each director separately. Documentation, handwritten, synthasized, original destroyed. Sampling and metrics goes into the file.

Shareholder value. Board may not have as much impact as is often assumed. Company can be successful with incompetent board. However, reverse isn’t as likely to be true, at least not continuing for several years. What’s board’s role in lack of success? Company may be underperforming but outperforming competiton. Poor performance will put board under spotlight. Not metrisized on board evaluation. Size of boards is often driven by types of committees and ability of at least two to meet at the same time. Working on competency skills and attributes — someting more and more nominating committees are spending more time on.

Make sure everyone speaks. Evaluations are a good tool that makes the chair’s job easier. Get down to the level of indivisual assessments.

Bob Clarkson, a partner at the Jones Day law firm, has practiced law in Silicon Valley for more than 25 years. Before joining Jones Day, Bob was an operating executive at CKS Group and its successor entities US Web and MarchFirst. Bob also serves as chairman of the board of Symmetricom, a NASDAQ company, where he previously chaired the governance and compensation committees and was a member of the audit committee.

View the video. This program, like all SVNACD programs, is subject to the Chatham House Rule. Sign up for future events.  Another Example of a prior event.