Some scribbles from the recent LA Trustees Round Up. I was more focused on reporting the first day on governance issues. I took far fewer notes on the second day but they may still be of some interest to CorpGov.net readers. There were several additional inspirational speakers. I mostly listened and didn’t take notes. Affiliations are listed for identification purposes only. Opinions expressed may be those of the speakers, my interpretation or my own speculation. 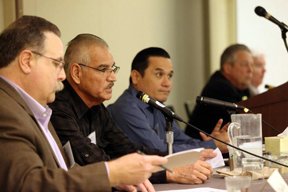 Each panelist provided stories of how they became aware of the importance of pension funds and how private pensions have been under attack or have been abolished. Amortization over half the period for some under the Pension Protection Act of 2006 (PPA) created real problems. Those in the nonprofit sector may be in even more danger due to fewer and smaller retirement programs. When the economy drops so do charitable contributions, even though needs are higher. Conflicts between public unionized employees and private around contracting out or moving clients out of public mental care facilities to private care were also discussed.

The California Debate over Secure Retirement: What to Expect in 2012 Barbara Maynard, Horizon Institute. Read Retirement Heist: How Companies Plunder and Profit from the Nest Eggs of American Workers

Politics and busting the unions through their pension funds. Yevonne Walker, President SEIU Local 1000. How do we achieve retirement security for all? Current “retirement security” means most will have to work until the day they die. The chance for financial security is disappearing. Many are afraid of outliving savings. Companies looted retirement to pay off corporate debt and increase their own bonuses. 401(k) plans are better for higher income employees who can afford to save. $18,000 in median 401(k) plan. Those in their 60s have less than $100,000 saved after working for 30 years. 74% of Californians surveyed are worried. 94% thought retirement security for all is important. 77% say younger employees will have less than they did. 65% voters surveyed are just getting by. 30% have access to a pension plan but only 40% of those think it will be enough. Those surveyed don’t like “defined benefit plans” but they did want a “guaranteed” retirement. Language matters. 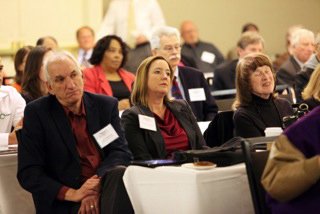 Friedlander, Hendricks, Widner in foreground. Walker and McRitchie behind.

I suppose many don’t really know what a DB plan is… but they like the sound of a guarantee. Trust: Highest for federal government, then CalPERS. Private wealth management firms were way down the list. There is an overall distrust of bankers and private financial institutions.  Not surprising, given financial meltdown is still a recent memory. See Fact Check from SEIU. Kevin DeLeon introduced SB 1234 (text) to create opportunities for more than 401(k) plans. I hope Californians rally support around the bill. Adding to the likelihood that Californians can save for retirement seems like a much better option than cutting the retirements of public employees, although abuses mostly at the local level, certainly need to be addressed. For example, see Stockton: work month, get lifetime health care?, CalPensions.

San Diego looking at moving public employees, except police, out of DB plans. Firefighters, teachers, nurses and police were viewed favorably. Since 2010 numbers have rebounded. Additudes to public employuees remain relatively stable. Concern over pension issues is near the bottom of voter concerns, well below, many other issues. Voters are very concerned about being able to afford their own retirement. Most will vote yes on just about any reform. Rising retirement age, increase contribution are popular solutions as applied to public employees. Despite sympathy; we are losing. Californian’s are not ideological on the issues. They are not informed either. They have no idea what public employee retirements are and will overestimate by a factor of 2 or 3 how much retirees make.

However, attitudes are not inflexible; they are willing to consider new ideas. Give them something to be for, instead of being against. Basically, many are scared and uninformed. The few large pensions (2%) get the press. $23,000/yr after 20 yrs on the garbage truck… that’s Raymond’s pension.

Working Together for Retirement Security.  Willie Pelote, Assistant Director, Politica Action, AFSCME State Council. Opposition has framed the dialogue. DeLeon bill is not a stunt. We are all against pension fund spiking. It is an edge issue for Republicans. AFSCME will be fighting to reeducate every household in America.

Rhee – “Filling the California Private Sector Pension Gap” California’s is worse than most of the US. 38 vs 43% participate. The larger the firm, the more likely you are to have a pension plan. 1/2 of CA workers will retire on less than 200% of poverty level. Increased savings, safer investment vehicle, secure in state sponsored pension for private sector workers could be the answer. Mandatory or voluntary? Who bears risks? Voluntary annuitization? Separate trust. ScholarShare could be a good model. CalPERS or CalSTRS could be the gatekeeper, contracting out much of the work. Legal changes are required for EDD to deduct payroll contributions. 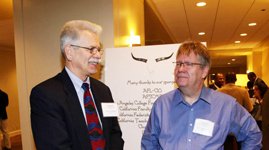 Glazier – 17% of funds invested in California. 1 out of four Americans are baby boomers and will be turning 65. CA has 4.2 million 65 or older. 84% are concerned about the adequacy of their pensions and/or savings. Only 17% expect to maintain their current lifestyle. Seniors lost 49% of net wealth in the recent financial crash. 56% had less than $25,000 in retirement savings. Those saving for 30 years had average of $184,000 but that won’t get them through 30 years of retirement. Traditional DB is the superior choice. Dollar for dollar half the cost of 401(k) plans due to lower fees and superior returns. Long-term investment horison over diversified portfolio. What role should government play; who bears risk; would it violate fiduciary duties of public plan trustee; how would it impact current tax status of public pension plans?  Opt in or opt out? SB 1234 De Leon, Steinberg and Assembly Member Furutani.  Golden State Retirement Savings Investment Board would be under the State Treasurer. Employees can opt out under the current draft language but employers can’t.  3% toward savings plan would result in $6 B in first yr.

Kim – The Secure Choice Pension (SCP) idea began in 2010. Multi-employer, basic hybrid plan, portable, conservative funding, flexibility in sharing risk of underfunding. 3% employer/3% employee. No lump sum distribution. Third leg of retirement, along with Social Security and 401(k) savings plan. You can be at 84% of where you need to be.  Calculated with a 3% minimum return, 5% normal rate. 7% is long-term assumption for target. Returns over 7% to be held in the fund.  Termination protections, disability/dealth provisions, liability strategies, rollover of qualified assets options?  82% of small business owners surveyed were positive. Need to change fed law re ERISA. See RetirementSecurityforAll.org.

Karen Friedman – Consumer rights group to promote pensions nationally. Retirement Income Deficit – the gap between what should have save and have saved represents a $6.6 trillion deficit. Median $45,000 or $98,000 at retirement. Retirements USA Universal, Secure and Adequate. Studied systems in other countries. Came up with 12 principles. Universal coverage unless already secure, security, adequate, shared responsiblity, required contributions, pooled assets, payouts only at retirement, lifetime payouts, portable benefits, voluntary savings, efficient and transparent administration, effective oversight. Split employer/employee at 5%. Netherlands, Australia 9%. Society of Actuaries coming out with something similar. Looking for enabling legislation.  Convince committees on state plan initiatives. Speak out on retirement, a huge issue that will soon come to roost for many baby-boomers.

It was a great two day event. First day on governance issues. Nice to renew friendships and acquaintances. I was especially delighted to meet Argus Cunningham and Maggie Spivey there from Sharegate.com. They are still building out their product but from what I’ve seen it will be transformative.

Our goal is to develop a large and robust information exchange platform that will connect individual and institutional investors, publicly-traded corporations, and affiliate members within a transparent forum.

I saw them demonstrating their platform to a number of pension fund employees and was happy to see that Florida SBA and several others have signed up. Good to see them sticking around for the second day as well. As I’ve written elsewhere (Sharegate Launches in Beta: Social Media to Facilitate Shareowner Action), their system has gotten me excited about the prospect of taking straw polls of actual shareowners, especially prior to submitting shareowner proposals. I expect that Sharegate.com will bring a whole new meaning to shareowner forums.

Photos courtesy of the LA Trustees Network. Photos of Cunningham and Spivey lifted from Sharegate.com.