This was the second in a three part overview of shareholder activism, beginning with the history and an overview of the key players in the space; continuing with a behind-the-scenes look at non-contentious shareholder engagement and how its impacting companies and the market; and ending with an overview of proxy fights, PR wars and activist defense. 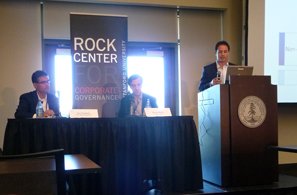 Mason Morfit, a Partner at ValueAct Capital and one of the most successful shareholder activists in the US and Abe Friedman, former Global Head of Corporate Governance & Responsible Investment for BlackRock, the world’s largest asset manager, shared insights from their experience in the trenches. This second session involved more of those stories. In addition, they will offer insights on activism globally, how activism in the US is changing and what that means for corporate America in the next decade.

Last week’s session was held at the law school; this week’s at the business school. I vote for the law school. Here, the window made photos more difficult, the chairs didn’t roll and the venue wasn’t as intimate… still very nice though. Any student of corporate governance in the Bay Area would be foolish to pass up these free educational events. Directors would typically pay thousands for such insights. 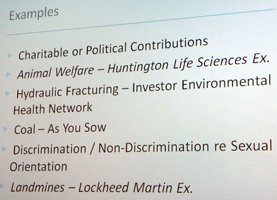 Strategy/Management.  These are the areas of interest to activist hedge funds… although not so much to institutional investors or proxy advisers … and is key to profitability for such funds.

Boards work collaboratively but many directors are willing to admit (at least to McKinsey) that they don’t know the company’s industry or risks their company faces. ValueAct does, because they’ve studied the other companies before they take a position in an industry.

Mason gave an example of a company where he went on the board and at one of his first board meetings management claimed the company was growing and taking market share. After a few questions it was apparent that much of their “growth” came from foreign exchange gains. CEOs have the upper-hand when they present information to boards, especially when directors don’t do their homework to learn all about the company and how it compares to the competition.

Compensation. Everyone cares about it. Every compensation package is different and most are complicated. Mason discussed a range of incentives. Increasing the percentage of growth going to the CEO when it reaches toward the extraordinary should deliver better performance.

Re proxy advisors. Abe discussed a better way to group peers. Much of the anger with ISS/Glass Lewis revolves around compensation issues. They write research on thousands of companies. Institutional investors own thousands and thousands of companies using a rigid black and white model. ISS also does consulting on how to pass their comp model. Companies will often pay to run their comp program through ISS model but they really resent it. Comp is probably the worst part of the research they do. Yet, this is the one part that investors actually follow. Institutional investors can’t generally create their own comp models on the thousands of firms they own. It is very convenient to hire ISS/Glass Lewis. Explosive level of frustration.

ISS SVT model (for the curious, see 10 Tips for Navigating the ISS Equity Plan Maze). Glass Lewis “tried harder” and looked over longer periods, compared to a variety of peer groups. Still not very good. Lots of work going on today. Equilar seems to be making more progress than most on the peer group front. They look at every company and map peers based on each company’s own disclosures. If a company chooses a peer that doesn’t choose them back and not even the peers of that company’s peers choose them, maybe the company isn’t really a peer.  See the video below.

Abe is not a big fan of say on pay. Shareholders not good at looking at plans…. better ex post.

2006 CD&A rule. After that, say on pay rule had impact. Companies who lost votes found it was a referundum on comp committee members. Directors don’t want to be embarased. They spent a lot of time and effort cleaning up employement contracts… all aimed at gaming ISS system. Got rid of tax gross-ups. To clean things up there was a lot of money spent to pay out executives. Had to make execs whole on contacts that had to be modified. Investors overweight proxy advisor ratings. However, if company’s are willing to engage, you can get around the proxy advisory firms by talking with your shareowners.

Shareholder rights. Example, of Fortune 10 company who called up Abe for a meeting. They discussed and wide range of issues, including separation of CEO/Chair positions or establishing a lead director (BlackRock would settle for that). Two days later the company changed to adopt a lead independent director. That was early days when Abe realized how much influence BlackRock had. There is a a lot happening behind the scenes, if you engage in a reasonable and respectful way.

Board composition/MA- public bidding. Story about holding back on casting votes in order to drive as much value as possible by driving up price. Late voting incentivized raising the price as high as possible. Institutional investors can control the flow of their own votes to maximize return. Again, a lot happening behind the scenes. Came down to last minute… cast Sunday night for Monday meeting.

Q: Who owns strategy? Mason – board should but in most case they don’t have the time. View job as compliance and do no harm. CEO designs; board owns.

Hard as a part-time board member to really get your arms around business problems. Too much compliance related stuff leaving business related work to the last couple of hours of a board meeting. Need to spend a lot of time talking to competitors and looking through excel spreadsheets to really be effective.