This was the last of a three part overview of shareholder activism, beginning with the history and an overview of the key players in the space; continuing with a behind-the-scenes look at non-contentious shareholder engagement and how its impacting companies and the market; and ending with this session on Contested Situations: Proxy Fights, PR wars and activist defense. 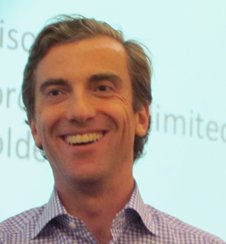 Mason Morfit, a Partner at ValueAct Capital and one of the most successful shareholder

activists in the US and Abe Friedman, former Global Head of Corporate Governance & Responsible Investment for BlackRock, the world’s largest asset manager, shared insights from their experience in the trenches.

PR campaigns aren’t long-term value creators. Ten years ago no real activism, other than “corporate raiders.” Discussed broker votes for routine proposals, such as director elections. There was only one advisory firm. 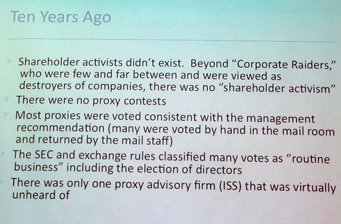 During the last 12 months there have been 48 contests. 30 activist situations every year. BlackRock sent letter to 600 CEOs for engagement. Multiple governance ratings agencies. Institutions now have proxy teams. Corporate executives will now put their names on dissident slates if they believe there is a real issue at the company. (new in last three years)

Section 13 on groups and section 14 limit communications with other shareowners. Cost of proxy solicitation is high. Company and board usually have more information than you do. Nearly impossible to coordinate between funds. Attention deficit disorder of institutional investors. ISS and Glass-Lewis important drivers. Most corporations go into no comment mode with press in contests. WSJ NYT end up writing your storey (hedge fund’s) so you dominate. 1/3 of equities are in passively managed  investment vehicles.  Passive index funds aren’s keyed into business analysis so driven by policies. What is the conversation that would resonate?

Poison pen letters. Mason hasn’t done it. Says it doesn’t work at big companies. Gives activist shareowners a bad name. Went to an example of Novartis’s bid for Chiron. Flu vacine. Novartis owned 40% and bid for whole thing, saying they would veto any other bid. Offered $40, later $45. Most of the market didn’t seem to care until Citibank filed a 13D supporting ValueAct’s acquisition. Then it broke through $45.

CEO was apparently told to go on roadshow to drive down the price of the company. Volley’s back and forth with press releases and company was plying ball, so kept in news. Chris Young termed it Bizarro world where everything spoken by Chiron was the opposite. (similar to George Costanza’s do the opposite) ISS finally came out with analysis. Just being right isn’t enough. Need institutional investors and ISS. Politics prevails. Work with the reporters. 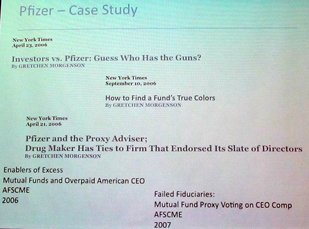 Example of Pfizer $100M severance package. Vote no campaign launched in 2006 by union funds such as AFSCME. Comp committee realized they had made a wrong decision in contract. They reversed but couldn’t reverse for CEO. Didn’t make sense to vote out comp committee. Turns out BlackRock ran pension fund for Pfizer. Morgenson wrote column on conflict of interest with BGI. She wrote scathing story after the fact. How to find a Fund’s True Colors. 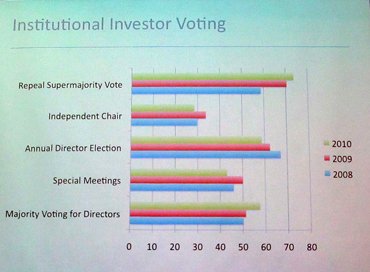 Acxiom in 2003 Mason invested in. information management firm. Spent millions to sponsor racing teams. Run by imperial type CEO. Morgenson Gentlemen, Start Your Proxy Fight (5/14/2006). Tangled web slide shows Acxiom was very incestuous & Morgan Family Members. (Graph was from Change Acxiom.com, since taken down. I didn’t post because impossible to read in small format.) It was the straw that broke the camel’s back. Leverage — gave seats to get the website down or simply end the battle and bad publicity. Unfortunately, after most such fights, the board freezes you out because the fight was so emotional. 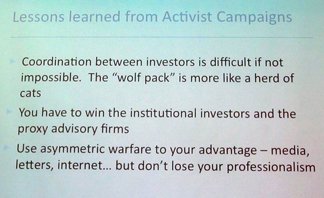 Expectations of institutional investors are on the rise. Companies expect shareowners to engage. We will see shareowners nominating directors in corporate proxies.

It was a great series, I hope the Rock Center does many more like it. Abe and Mason offered insights only insiders can. I’m sure those attending found all three sessions well worthwhile. One area I would differ with the presenters is on the point that corporations should not be considered anything like democracies. As a student of behavioral sciences, almost all experiments show that greater participation in decision-making leads to greater productivity, except in the very simplest of tasks. My own experience at Rath Meatpackingand heading California’s Cooperative short-lived Development Program provided me with first-hand evidence. I also believe what is true for employees can also be true for shareowners. The more brains are engaged, the more productive our companies can be.

One on One with Mason

Of course, we don’t want shareowners making day-to-day decisions. The key decision shareowners need to make is who will represent them on the board. Funds like ValueAct Capital, which has a great deal of experience in fielding directors, are well qualified to make such decisions. However, I would argue that even highly interested small groups and individuals can offer alternatives that are well worth consideration. 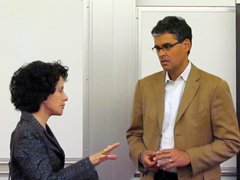 One on One with Friedman

For how we got where we are with regard to the divergence of democracy in civil vs corporate governance, read Shareholder Democracies? For why democratic corporate governance is important going forward, see Entrepreneurs and Democracy: A Political Theory of Corporate Governance.  See also, Part 1 and Part 2.