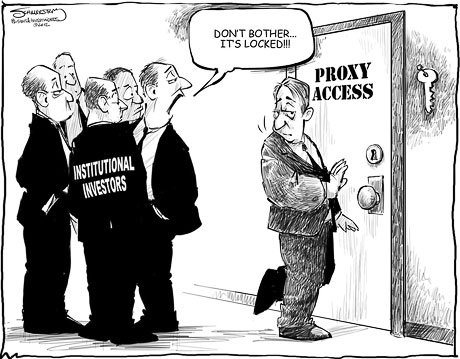 The cartoon at left accompanied an article entitled Where are the funds? (Pensions & Investments, 3/5/2012) P&I lamented, “instead of sitting on the sidelines, activist investors should take advantage of the opportunity to file access proposals… proxy access proponents must be adventurous.” We are going to use the key; adventure is on the way.

As I mentioned in my post 2012 Proxy Access Efforts (July 10), Ken Steiner’s proxy access proposals will be voted on at the Forest Labs (FRX) annual meeting, scheduled for August 15th and the Medtronic (MDT) meeting, scheduled for August 23rd. Word came last week; the SEC also refused to grant a no-action letter to H&R Block (HRB), so Steiner’s USPX designed proposal will also be voted on at their meeting on September 13th.

Download PowerPoint presentation and read the paper (pdf) on these important proposals.

When we crafted our model proxy access proposal, we carefully reviewed the SEC’s Rule 14a-11, which was thrown out by the DC court for underestimating the amount companies would spend to retain entrenched directors. The only justification the SEC provided for their onerous 3% for 3 years eligibility requirement was the following:

That would limit proxy access to billionaires and groups of the largest funds at many companies. Convenience or cost savings should not justify the sweeping disenfranchisement of most shareowners. Therefore, we took a step back and identified possible justifications for eligibility requirement in descending order of acceptability:
We predicated the USPX Model Proposal eligibility requirements primarily on the first item, although we also see value in items 2-4. The USPX Model Proposal’s eligibility requirements are designed to impose the least disenfranchisement necessary to achieve the goal of encouraging quality nominations by requiring a huge effort or a large stake to nominate.
Common features of the USPX proposals are as follows:

MDT and FRX proposals have no cap on total number of shareowner nominees. The proposal at HRB has a max 1 board nominee (12% of board) by each nominator or group but it is capped at 2 nominations (24% of board) each for 1% holder groups and 50 shareowner groups,

There is some consensus among shareowners that proxy access should not be used to pursue a “change of control.” Rule 14a-11 achieved this with the blunt mechanism of capping proxy access nominations at 25% of a board’s seats. This has a devastating consequence, since it guarantees existing entrenched boards will retain a supermajority.

It is conceivable that if there are enough parties nominating candidates at companies adopting the USPX proxy access model with no cap, and those candidates win, such situations might be treated as changes of control by corporations and state law, although such elections don’t meet the SEC’s own definition for change of control.

The original USPX model proposal had a provision that such elections would not be treated by the company as a change of control. However, commission staff deemed that provision a separate proposal, so we removed it from the most recent version of the model proposal. At companies that adopt the model proposal, we will likely submit follow-on proposals a few years later to address the issue.

We understand that corporations may have contractual obligations based on a definition of change of control that could treat elections where a majority of an existing board is removed as a change of control despite the above-mentioned follow-on proposal. Such contractual provisions might conceivably appear in employment contracts, bond indenture or trust documents of pension plans. Obviously, such contractual obligations would have to be honored. However, the follow-on proposal would address them going forward by, perhaps, requiring that as employment contracts are renegotiated, they exclude such provisions, etc.

These are problems that lie far in the future. Under even a best-case scenario for proxy access, we can’t imagine more than two or three proxy access nominees being elected in any board election for years to come. Our proposal at H&R Block further avoids the change in control issue by capping shareowner nominees at 48% of the board.

What companies could benefit from proxy access? Chris Zook and James Allen, leaders of Bain & Company’s Strategy practice, calculate that  “only about 9% of global companies have been able to achieve more than a modest level of sustained and profitable growth over the course of the last decade.” (Repeatability: Build Enduring Businesses for a World of Constant Change

) That’s a very low bar.
Why did we target these specific firms? These firms have problems but they aren’t in free-fall. Proxy access could make a real difference before substantial value is lost both by putting the feet of existing directors to the fire and by posing the real possibility of new directors being nominated and elected next year. The two-year time frame of proxy access proposals is inappropriate for companies already in crisis.

If the USPX proxy access proposal had been in place and Carl Ichan chose to use it, instead of an independent solicitation, he could only nominate 1 candidate instead of 4. Others may have put up additional candidates, increasing the scope of debate. We share Ichan’s concerns re director independence, cronyism, legal issues, and succession planning.

These companies are not in free-fall. Each is valuable but each has significant issues. It is far better to have proxy access in place, ready to go when needed, than it is to wait for them to possibly become basket cases. We could use a little insurance at each company that boards will be responsive to shareowners.

Proxy access is like the Magna Carta. The first clause of the Magna Carta guaranteed “freedom of elections” to clerical offices of the English church to prevent the king from making appointments and siphoning off church revenues. Proxy access could have a similar impact on the governance of corporations. As direct owners, retail investors are incentivized to work to guarantee free elections at our companies. I hope you will not only vote in favor of these proposals with the shares you hold directly but will also encourage the funds you participate in to do likewise. As the P&I article cited at the beginning of this post noted:

First, shareholders are likely to nominate directors only sparingly, as the current re-election of the vast majority of directors attests to shareholder satisfaction with them.

The SEC Commission’s stated intent for proxy access was to create a process that functions, as nearly as possible, as a replacement for an actual, in-person gathering of security holders, thus enabling them ‘‘to control the corporation as effectively as they might have by attending a shareholder meeting.’’

The proposals that will soon come to a vote at FRX, MDT and HRB, if enacted, will ensure that long-term shareowners have a reasonable, but not necessarily easy, means for including board nominations in the proxy materials those corporations distribute. They include an important theoretical shift for shareowners and boards of directors away from contests of control to communities of diversity, dialogue and cooperation. The key to more democratic, more accountable corporate governance is right in front of us. Let’s hope shareowners decide to use it.