If a window is broken and left unrepaired, people walking by will conclude that no one cares and no one is in charge. Soon, more windows will be broken, and a sense of anarchy will spread.

In the following post I argue that relatively minor problems, like how items left blank on a proxy are counted and how Broadridge labels shareowner proposals, sends a signal. Just like an abundance of graffiti tells you gangs are in charge, switching blank votes to management and relabeling shareowner proposals to gibberish tells you that shareowners are indifferent and that corporate managers have a clear invitation to more serious crime. I ask readers to take a simple action at the end of the post that, like fixing broken windows, could lead to the end of much more serious abuses.

One of the best sources for weeding out the significant from the large volume of information coming out of the SEC that is relevant to shareowners and directors is theCorporateCounsel.net. Here’s a January 3rd post from Broc Romanek entitled Corp Fin’s New Position on Use of “Vote All of Board’s Recommendation” Button. I’ve added a few links.

Recently, Broadridge sent this letter to companies explaining a big change going forward over how voting choices will be displayed. Here is an excerpt from the letter:

Broadridge, transfer agents and other service providers in the proxy distribution industry were recently informed of a new interpretive position being taken by the staff of the SEC that will affect the 2013 proxy season. Under that position, Broadridge and other service providers can no longer present shareholders with a “Vote with the Board’s Recommendations” button when soliciting proxies or voting instructions online, over the telephone, or through Broadridge’s unique mobile voting platform, unless they are also presented with a “Vote Against the Board’s Recommendations” button.

Over the course of the last several months, Broadridge has engaged in an extensive dialogue with the Broadridge Independent Steering Committee, as well as with the SEC, to better understand the SEC’s new interpretive position and to explore ways that it could accommodate the SEC’s new position in light of its potentially negative impact on retail voting. Due primarily to technical complications presented by director election proposals and the Dodd-Frank required say on pay frequency vote, the presentation of a “Vote Against the Board’s Recommendations” option was not currently feasible. Accordingly, after careful consideration, we have developed a new structure to implement this new interpretation to ProxyVote.com, our online voting platform, Mobile ProxyVote, our mobile voting platform and to IVR, our telephone voting platform. Under this new structure, ProxyVote, Mobile ProxyVote.com and IVR will be revised as follows:

See also, Setting Expectations for 2013 Proxy Season, NYSE Euronext, 1/4/2013 and SEC’s new position on voting buttons necessitates changes to online and telephone proxy solicitation, Holland & Knight LLP, Paul S. Lawler. At first, I thought maybe this change would decrease the number of blank votes going to management. After further reflection, it may be a net positive but it is very hard to tell. Here’s a screen shot of one of my upcoming proxies or more specifically the voter information form (VIF) prepared by Broadridge, in this case for Costco. (I wrote most of this post several weeks ago.) 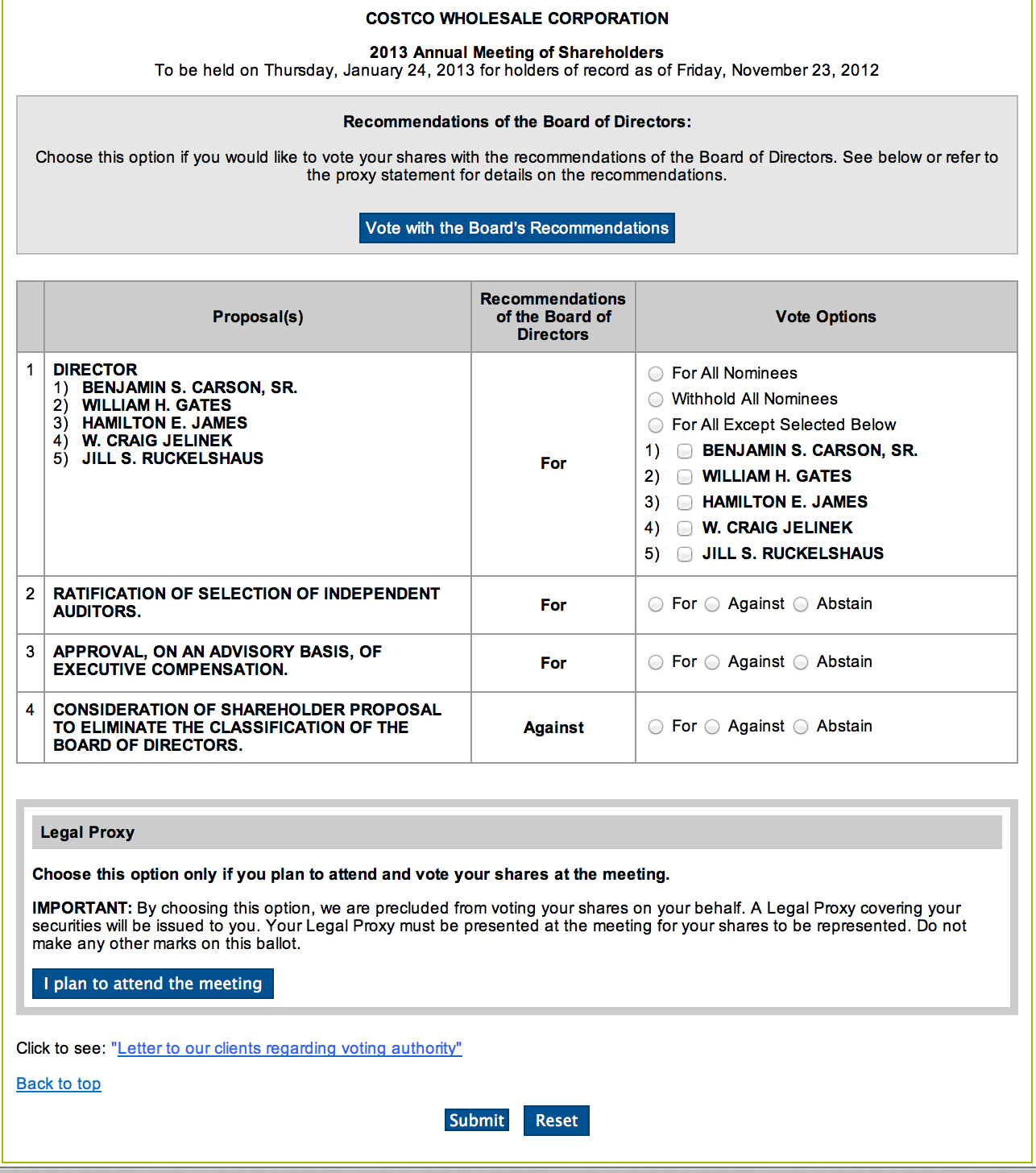 As you can see, the “Vote With the Board’s Recommendation” button is very large and tempting for busy shareowners who may wish to finish up voting quickly. I hadn’t actually analyzed Costco, so wasn’t sure yet how I would vote (later announced my vote here). However, in this example I voted for all directors and for the shareowner proposal but left items 2 and 3 blank. Here’s the next screen. 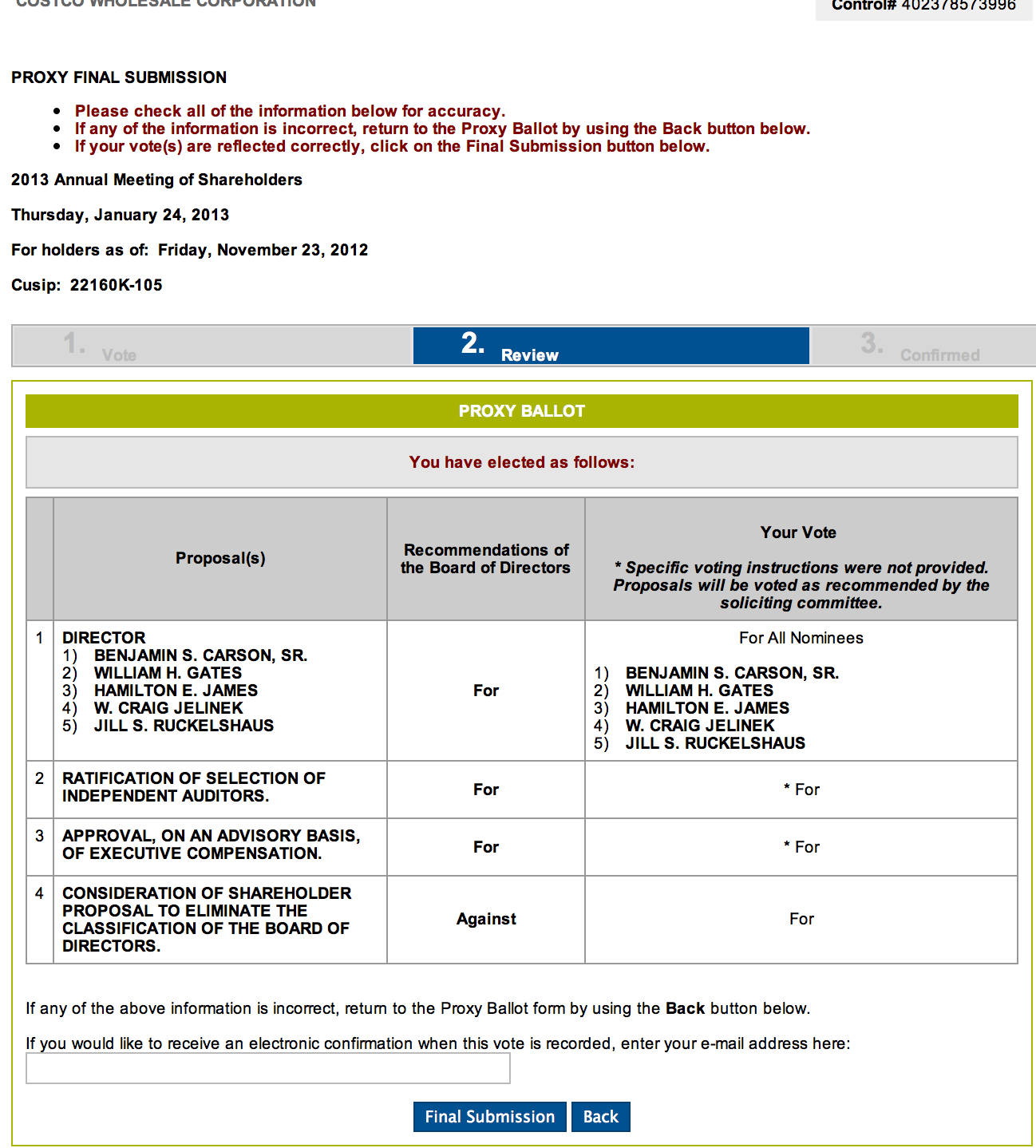 As you can see, Broadridge fills in the blank votes with votes cast per the board’s recommendation… in this case “For,” and places a small asterisk * referencing the following note above in the grey box:

Specific voting instructions were not provided. Proposals will be voted as recommended by the soliciting committee.

Under the newly announced system, Broadridge gets rid of the “Vote with the Board’s Recommendations” button and substitutes a “Submit” button, which does much the same. However, they do warn shareowners in advance that if you select the SUBMIT button without specifying a choice, “your vote instructions will be cast in accordance with the recommendations of the Board of Directors.” The next screen shot was sent to me from Broadridge, as an example of the new form of proxy (VIF).

While advising shareowners on the first screen, in advance of changing their vote, is a plus, shareowners may mistakenly believe they are not voting with management if they leave the same two items blank and fail to read the center box. SEC Rule 14a-4(b)(1) says,

A proxy may confer discretionary authority with respect to matters as to which a choice is not specified by the security holder provided that the form of proxy states in bold-face type how it is intended to vote the shares represented by the proxy in each such case.

Is the warning contained in the center box in the required bold-face type? It doesn’t look so to me… at least it is no bolder than most of the other type on the proxy. Broadridge claims that VIF’s aren’t proxies, and don’t have to meet these regulatory requirements. Neither do they appear to have to meet the requirements of SEC Rule 14a-4(a)(3), which requires that the form of proxy

Shall identify clearly and impartially each separate matter intended to be acted upon, whether or not related to or conditioned on the approval of other matters, and whether proposed by the registrant or by security holders.

We’ve seen many examples of Broadridge identifying shareowner proposals with either gibberish or with non-descriptive titles that force shareowners to read the proxy proposal carefully to be able to determine what the proposal is about. Unfortunately, too many shareowners won’t bother to read beyond the titles and will just vote with management when they don’t understand the issue. See “Corrected” Ballot at Altrea Tips Votes to Management.

Take Action: The SEC should require VIFs to be treated the same as proxies. Additionally, a ballot item that isn’t marked should be treated as an abstention, not a vote for management.  Let’s put an end to what essentially amounts to rigged voting in corporate elections. Small changes can make a big difference if thought of as a tipping point. If you agree, please fill out the SEC’s Investor Advisory Committee form with something like the following:

The IAC should try to level the playing field by recommending the Commission take action on the rulemaking petition to eliminate blank votes from automatically going to management submitted by James McRitchie and others at http://www.sec.gov/rules/petitions/2009/petn4-583.pdf.

The IAC should recommend the Commission amend Rule 14a-4 to remove the provision that confers discretionary authority on matters where choice has not been specified by the security holder or beneficial owner, should explicitly extend such prohibition of discretionary authority to companies where beneficial owners fail to provide instructions, and should make similar amendments to other rules that may provide such authority.