I found another case of corporate elections where ballot measures failed to be identified “clearly and impartially.” This time at Oshkosh ($OSK). Should we be surprised? Isn’t it time you took a minute out of your day to send a message to the SEC asking for an end to such abuses?

When it comes to proxy ballots, regulations are complex and mailing deadlines are tight. Broadridge helps fulfill regulatory responsibilities efficiently and economically. Broadridge handles the entire process on-line and in real time, from coordination with third-party entities to ordering, inventory maintenance, mailing, tracking and vote tabulation.

When selling their services, Broadridge says “regulations are complex.” Yet, when I talk with them, they tell me voter instruction forms (VIFs), issued to retail shareowners who hold shares in “street name” with their brokers, aren’t proxies and don’t have to meet regulations such as SEC Rule 14a-4(a)(3), which requires that the form of proxy

Shall identify clearly and impartially each separate matter intended to be acted upon, whether or not related to or conditioned on the approval of other matters, and whether proposed by the registrant or by security holders.

Broadridge representatives tell me they “try” to summarize proxy proposals using an impartial title but if that can’t be done easily they put a general statement on the VIF, referring the shareowner to the proxy materials. A typical example would be as follows:

a shareholder proposal described in the proxy statement

I have never seen Broadridge use such a title for any proposal put forward by a company’s board, so Broadridge personnel must go into a state of automatic confusion when reading proposals from shareowners. Or, perhaps there is another explanation?

Obviously, such language prejudices the vote because shareowners must dive deep into the proxy materials to determine the subject of shareowner proposal that aren’t identified “clearly and impartially.” That takes time, so many either leave the item blank (in which case their abstention is turned into a vote in favor of the board’s recommendation; see Broken Windows & Proxy Vote Rigging – Both Invite More Serious Crime) or they vote as the board recommends, assuming (perhaps incorrectly) that the proposal is unimportant or unrelated to good corporate governance. 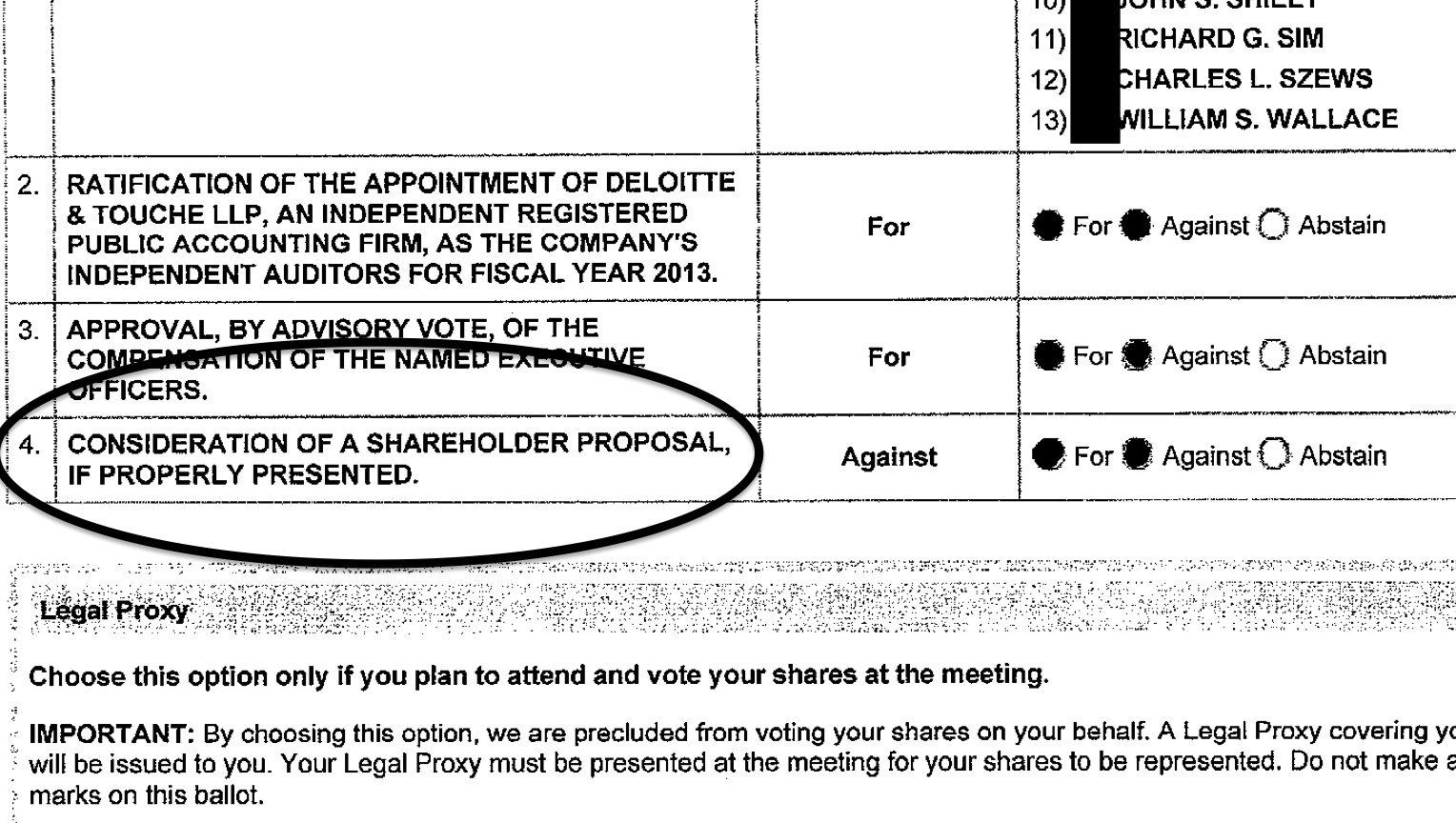 The latest instance of a biased VIF involves Oshkosh (OSK) and was brought to my attention by the shareowner proponent, John Chevedden. It is difficult for me to understand why Broadridge was not be able to summarize this proposal as “a shareholder proposal entitled executives to retain significant stock,” or something similar. It certainly was not new, unique or hard to understand. Many such proposals have gone before. Not only was the proposal not “clearly and impartially” identified, as required by SEC regulations, the proposal also implies any vote is of questionable value, since it will only be counted “if properly presented.”   See item number #4 from the VIF to the left and above. 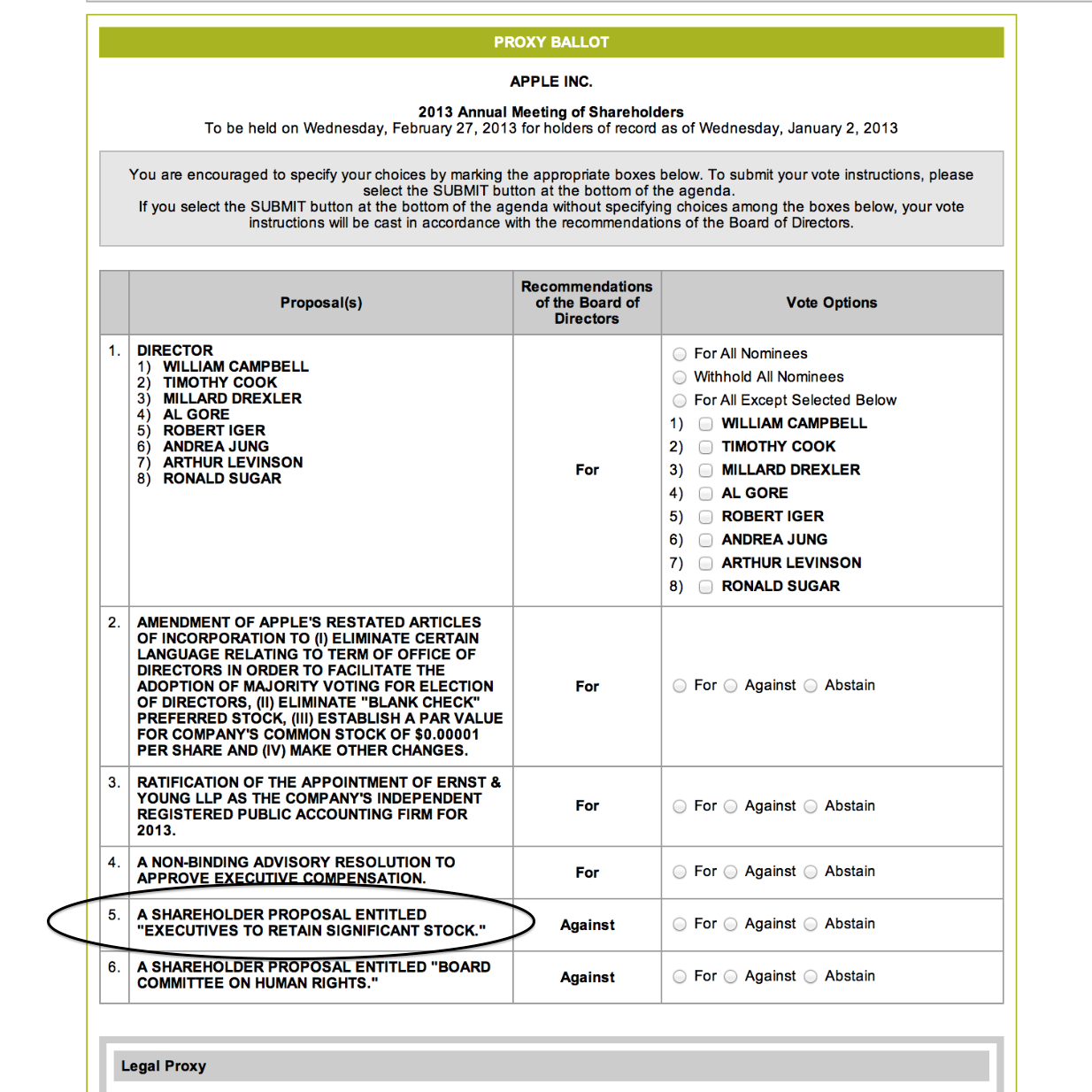 Compare that VIF to the one I recently received for Apple, below and to the right. Shareowner proposal #5 on the Apple (AAPL) VIF was submitted by me and was worded virtually the same as the one submitted to OSK, except for firm specific information.

John Chevedden wrote to the SEC’s Division of Corporate Finance on February 4 asking them to require the company to reissue their report of elections to include the following key information on its unfair election:

The company ballots did not even identify the topic of the shareholder proposal. However the topic of each management proposal was fully identified.

To top it off, the company prejudicially suggested, on the ballot itself, that voting for the shareholder proposal could be useless.

This is to request that the Staff require the company to reissue this report to include the above key information on its unfair election.

Chevedden’s request appears minimal to me. In a more fair and balanced world, OSK and Broadridge would be required to hold the election over again, while applying the SEC’s standard of presenting proposals “clearly and impartially.”

Retail shareowners left the market in droves after the 2008 financial crisis. Millions have been spent on laws to reassure investors that our markets are safe and that relevant information is impartially disclosed. Why does the SEC allow VIFs to obfuscate the issues?

We’ve seen too many examples of Broadridge identifying shareowner proposals with either gibberish or with non-descriptive titles that force shareowners to read the proxy proposal carefully to be able to determine what the proposal is about. See previous posts on the issue below.

Take Action: The SEC should require VIFs to be treated the same as proxies. Additionally, a ballot item that isn’t marked should be treated as an abstention, not a vote for management.  Let’s put an end to what essentially amounts to rigged voting in corporate elections. Small changes can make a big difference if thought of as a tipping point. If you agree, please click on and fill out the SEC’s Investor Advisory Committee form with something like the following:

I am disturbed by the latest bit of election rigging in the case of a proposal by John Chevedden at  Oshkosh (OSK) that was labeled “consideration of a shareholder proposal, if properly presented,” instead of as “a shareholder proposal entitled ‘executives to retain significant stock.'”  The VIF clearly did not meet the requirements of  SEC Rule 14a-4(a)(3) to identify proxy items “clearly and impartially.”

Please ask SEC staff for a legal opinion discussing what legal requirements apply to voter information forms (VIFs) and how, if at all, those requirements differ from the requirements that apply to proxies. Once legal staff have issued their opinion, the IAC should recommended any changes necessary so that the same protections are afforded to retail investors holding securities in “street name” as are afforded to shareowners with direct registration.

These issues were discussed in the 2009 rulemaking petition to eliminate blank votes from automatically going to management submitted by James McRitchie and others at http://www.sec.gov/rules/petitions/2009/petn4-583.pdf.

See also the following previous posts on this issue: