The program was subject to the Chatham House Rule, so there will be little in the way of attribution below but I hope to provide some sense of the discussion. I throw in a lot of opinions. Some are those of panelists, some are mine, and some came from the audience.  I still get a little lost in some of the financial discussions but think we need to raise public understanding, so I don’t shy away from trying to learn or from offering opinions. I had fun, learned from various perspectives, renewed acquaintances and made some new ones. If corporate governance is your thing, I hope to see you there in 2014.

“The Financial Industry: How Has It Performed Since 2008; Is More Regulation Needed?” Has the financial industry changed enough since 2008? And does the marketplace trust it more, or less, today?

Trust won’t come back until banking industry is tested again. A huge part of the problem was the failure to mark to market. Banks were penalized in stress test if they had done so.  Frank Partnoy and Jessie Eisinger took up the conservative example of Wells Fargo and concluded big investors (in the know) don’t trust the big banks either, although they may be more trustworthy than what public gives them credit. See What’s Inside America’s Banks? (The Atlantic, Jan/Feb, 2013) for a deep dive into “proprietary trading, “economic hedging,” and even more obscurely, “customer accommodation.” 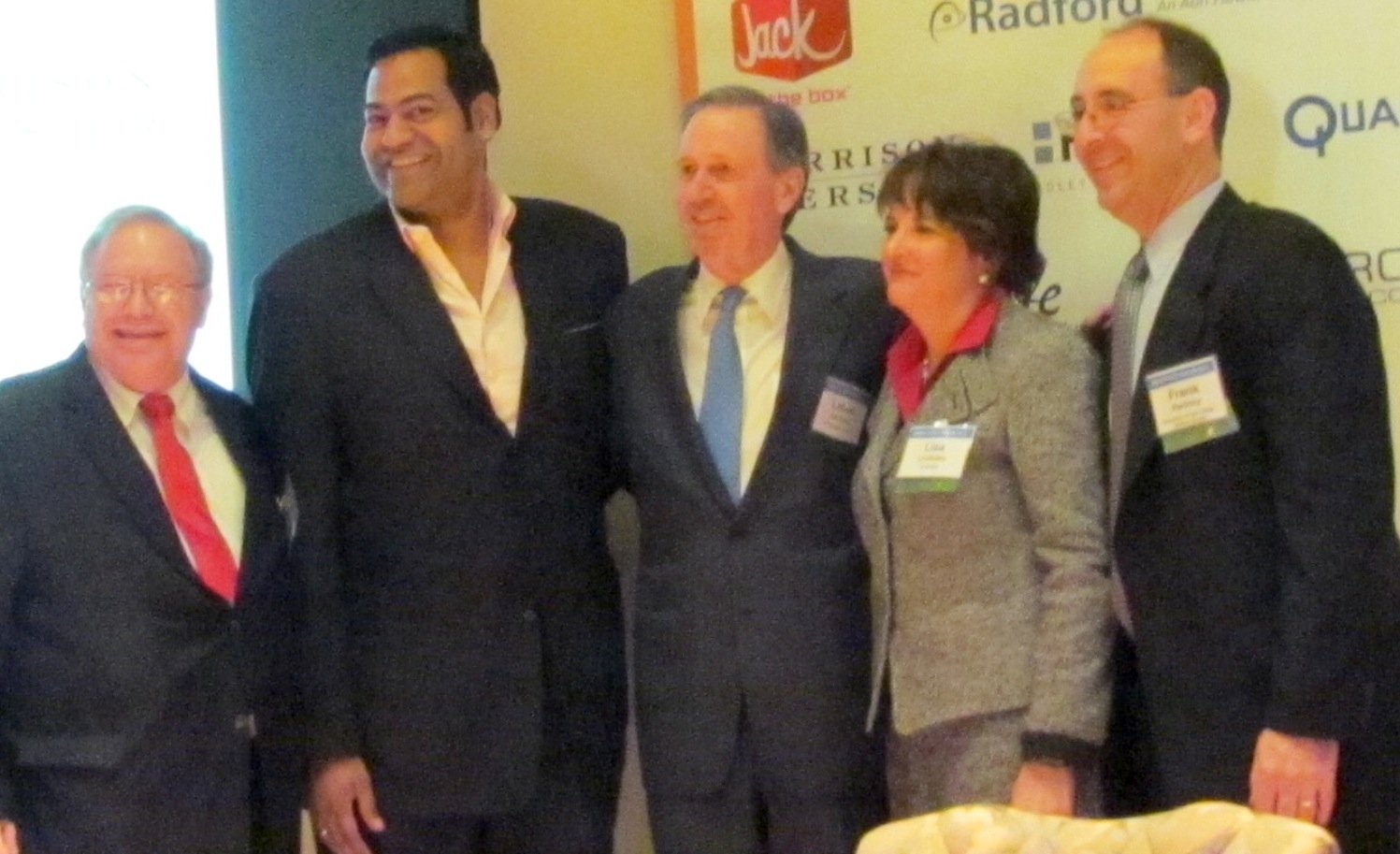 If they went to mark to market, we’d be a lot better off. Banks were more regulated back in the 1970s. Glass-Steagall discussed as much more effective and less costly than Dodd-Frank. Big banks are trading at less than book value. JP Morgan Chase report on the London Whale and failures of governance discussed. Chase cut CEOs salary in half but had a record year.

SEC forces banks to write goobly-de-gook that very few can understand. Real transparency is the major roadblock. Credibility will come, some think, when unemployment gets back to 6%. Then people won’t need to bash banks. But trust will be unwarranted. The trust question revolves around the role of the banks. They are risk capital providers. Balance is important but they take on too much too much risk.

How do we measure trust?  Loss of big clients would be one big measure of lost trust. Get respect back from clients. Get regulators to understand independent boards. People on the street… that’s just a timing thing. As long as our clients trust us, we have some trust. Need trust back from everyone. You can’t imagine the dumb things some employees say in e-mails. Those e-mails spoke to a culture of screw the customer. There’s a culture problem.

It is a huge mistake not to recognize we exist in a larger community. A high pressure intense market where the future not guaranteed breads callousness. The tolerance level of callousness has to be zero to weed them out. There is a stark difference in the culture now, some argue. Perhaps, but I would think it still has a way to go. As one person remarked, “at least daughters can be on trading floor today.” Yes, and some girls in Pakistan can get an education without being shot.

What’s changed since 2008? Capital and liquidity requirements have been raised. That’s most important. Lots of development around compensation and drivers. A five year holding period is viewed as forever on Wall Street but is becoming slightly more common, as are clawbacks. Incentives are more aligned. Investment bankers used to get 45% of “what they killed.” Now that’s down to 33%. Wouldn’t it be nice to get that lowered even further and get some of those profits out to shareowners. The banks I hold shares in seem to be working much harder for management than shareowners.  Banks have to be practical, to make it where it is worth being a shareowner. The large banks are beyond human control. We need Glass-Steagall back. We’ve got to be able to get restitution when bank goes under. If in the middle of panic, you can’t take a well-run company down… that would demonstrate trust.

Banks wrote bad loans that would never be repaid. That will continue. Tougher to get a loan today but will be easier years from now as memories fade and oversight loosens. We need a strong banking regulator. We don’t have it. Instead, we have a fragmented mess where regulators are the protectors of banks, instead of the public. We need a resolution authority for winding huge down banks.

My takeaway from this panel is the same as so many before it at various conferences since the crash… our financial regulations need a make-over. What’s Inside America’s Banks? does an excellent job of pointing the way for such a brief article.

“Happy Anniversary? A Decade of SOX and Two Years into Dodd Frank” Have these regulations improved corporate governance and company performance relative to the cost to shareholders? 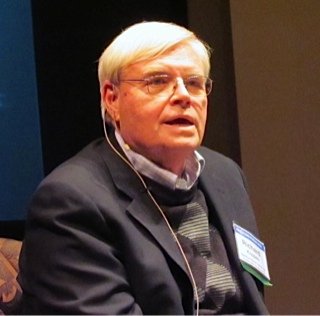 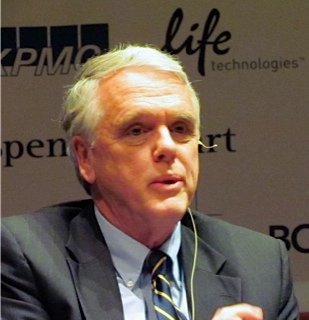 It takes a market crisis to move forward with corporate governance reforms. SOX seems to have been a step in the right directions. Requiring auditor independence worked. Objectivity and independence of auditors increased. Before SOX, companies didn’t even know how company divisions engaged auditors.

Dodd-Frank? Not so sure it is a significant contribution re changing governance. One size does not fit all. Governance at small-cap companies can be a zero sum game. Increased federalization is a distraction for limited resources.  There has been a sea change in the type of investors investing in small-caps. Institutional investors are investing upstream. Small-caps are now attracting retail investors. In many cases, they are essentially investing in clinical trials. Is DF worth the distraction? Private ordering might be a better option. SOX is a totally different animal than Dodd-Frank. SOX addressed management accountability. DF addresses the need better boards.

Market now for technology to drill down. Need to strengthen that market. Leveled playing field with regard to the cost of following best practices. Mandating audit firm rotation? With so many audits, increased independence, etc. aren’t concerns already addressed through that and through partner rotation? Loss of experience with specific companies would be too great. Majority voting with post-election process has became a market solution. Forced rotation is contrary to good business judgement. Rotation of lead partners is enough after 10 years. Average tenure at many firms was 35-40 years. Transparency of the relationship is good forst step.

There are only four major firms and most use another for other purposes. Not many choices. Your rotated auditor might go to work for a competitor. Even tougher for small firms. It would be an impediment to go public. Should be higher than $75M cap for drawing the line.

JOBS Act? Do we have confidence in companies that don’t match our best governance practices or is it appropriate to have a junior league?  Two-tiers problematic. JOBS Act flawed. Small-cap market broken because tick sizes shrank. Trade in small-cap markets became problematic when market-makers left. Being able to file an S1 and have it be confidential is important. Small caps have serial need to raise capital.  See SEC Could Test Bigger Tick Sizes for Smaller Stocks, Bloomberg, 2/5/2013.

How have fiduciary duties changed?  Some don’t want to give credit to DF or SOX but expectations around fiduciary duties have increased over the years. If we continue the trend down that road, including ISS policy re proposal that pass, precatory proposals will become mandatory. There are too many intermediaries between companies and beneficial owners. Boards have to be much more active in explaining why they are refusing to implement what appear to be “best practices.” Compliance requirements are taking too much time away from strategy. 80/20 rule: 80% strategy/20% compliance. It isn’t being met.

CEO/Chair in one office more likely to ensure focus, according to some.  Heavy emphasis on compliance breeds form over substance. Challenging for small-cap directors in dealing with ISS.

General Mills legitimate hedger because of commodities. They want the goods they are hedging. Dodd-Frank carved them out. Fear of being forced onto the exchanges.

Companies should look at proxy statement to include an ISS type summary in front. ISS moves 10-15% some think higher. Frequently vote is a signal around other issues. Intimidation or capitulation? Precatory proposals get company’s attention. If whareowners want it for next year, it should be a binding resolution. We have to eliminate withhold vote. Abuse of advisory vote… follow-on plaintiff bar suits to get money. CalSTRS, CalPERS, Florida SBA pursuing majority vote across Russell 3000. get rid of withhold votes. 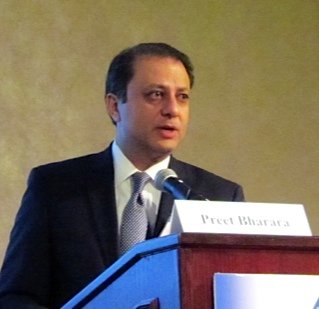 Ethics is more about checking your gut than checking a box. Culture is vital. Unfortunately, we can’t legislate a culture of integrity and fair play. There is a human tendency not to want to rock the boat or be branded a traitor. Bharara speaks at many university MBA programs, a sort of scared straight program for potential future criminals. Of course, we will have less corporate crime if more people say something early on. Cited example of Deep Horizon where few employees thought they could report on problems without reprisal.

Integrity must be rewarded. How many businesses screen for ethics? Provided several anecdotes about questions he has received from audience members who sought information about how “close to the line” they should go. His response was something like, aspiring to the minimum is a recipe for disaster. Integrity should be emphasized from recruitment to every day in operations. Let employees know they should not “look away,” even if moral lapses are making the company money. They need to be told, we don’t lie or cheat. We do what’s right.  We are honest to the marrow.

Q&A session topics included watchdogs that didn’t bark, tension between duty to company or CEO, guilt beyond a reasonable doubt — getting 12 jurors to agree as high bar requirements to convict, and the problem that independent third party experts are too willing to provide cover for directors and boards who “rely” on them to escape prosecution.