Replacing the CEO — A Boardroom Drama: Just “fire the CEO,” and now all is well?  A dramatization.

Boardroom Drama on Firing the CEO

A hypothetical board first considers replacing one bad CEO for what looks suspiciously like another. They agreed not to even check outside references, because the candidate didn’t want anyone to know he was looking. Board voted to cover value of candidate’s vested options and benefits.  He came back asking for 65% vs 50%  of peer group. One year later, he is underperforming peers due to write-offs from past mistakes, according to the CEO. Board presses for direction. Pushing for measurable key strategic options. CEO pushes for growth… organic growth through advertising  Need to ramp up technological innovation. Lack of capacity on research side. Sales forces are beginning to work together with cross marketing. CEO pushes for benchmark based on revenue growth.

Board wants and employee attitude survey. CEO says too expensive and without benefit. CEO wants nothing, beyond advice given, from the board (which he refuses to take). The CEO is wary of sinking too much time with board when they suggest another meeting on strategy in 6 months. Board sees need for other benchmarks besides revenue – TSR, operating profit, key metrics, long-term financial planning. CEO exempted a number of senior staff from FCPA training, entertainment expenses are up, etc. Board again pushes for employee morale survey. Discusses tone at the top culture issue. We are within our rights to tell him to do a survey. Many examples of how a board should not operate.

Company has another disappointing year because of headwinds in marketplace. Questions re organization’s ability to get behind the CEO. There’s a long history of divisions not working together. CEO says he sees improvement in attitude. Board wants an executive coach. CEO feels offended by that. Exec coaches are for beginners. OK, then what are his plans to bring employees along? Flatten the organizational structure, mentor division heads and keep comp bonus based solely on revenue.  CEO says that’s the way to go.

Board in executive session: The rest of us are held accountable for more than revenue. Share price, return on invested capital, EBITA. CEO says it would be a mistake to take our eye off the ball. Board concerned with singular focus on revenue. Develop clear metrics. Insist he hire a coach, COO and tell him performance is unsatisfactory. Four years into it, board thinks COO could be interim CEO. They fire the CEO.

Missing from discussion was shareowner angst. Board didn’t fire CEO quickly, didn’t really strategize. I almost always approach this segment of the Corporate Directors Forum with trepidation for the participants. Poor Ken Bertsch, acting the part of a problematic CEO and also thinking these folks aren’t actors. But, of course, it is probably lots of fun to play troublesome characters and to exeggerate their failings. By the time these skits are done, I usually end up thinking they were worthwhile. This round was no exception. What I really like is when Jim Hale survey’s the audience. For example, would they honor the candidate’s request and not check references. I’m thinking, no way… but a substantial portion of the audience was okay with that. I’ve only been on a couple of CEO hiring panels and they were at small companies. There’s no way we would have hired without checking references… so there is a lot of variation in what company board actually do in practice. 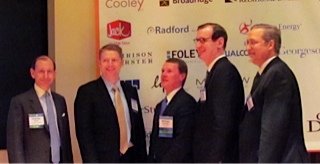 Two drivers. 1. stock options  2. peer groups. Companies ask employees not to share compensation so they won’t get jealous and spur inflation.  Captured board theory and star system. Target % of peer group, results in a 15-20% a year rise on pay each year. Elson’s student got grant from IRRC institute. 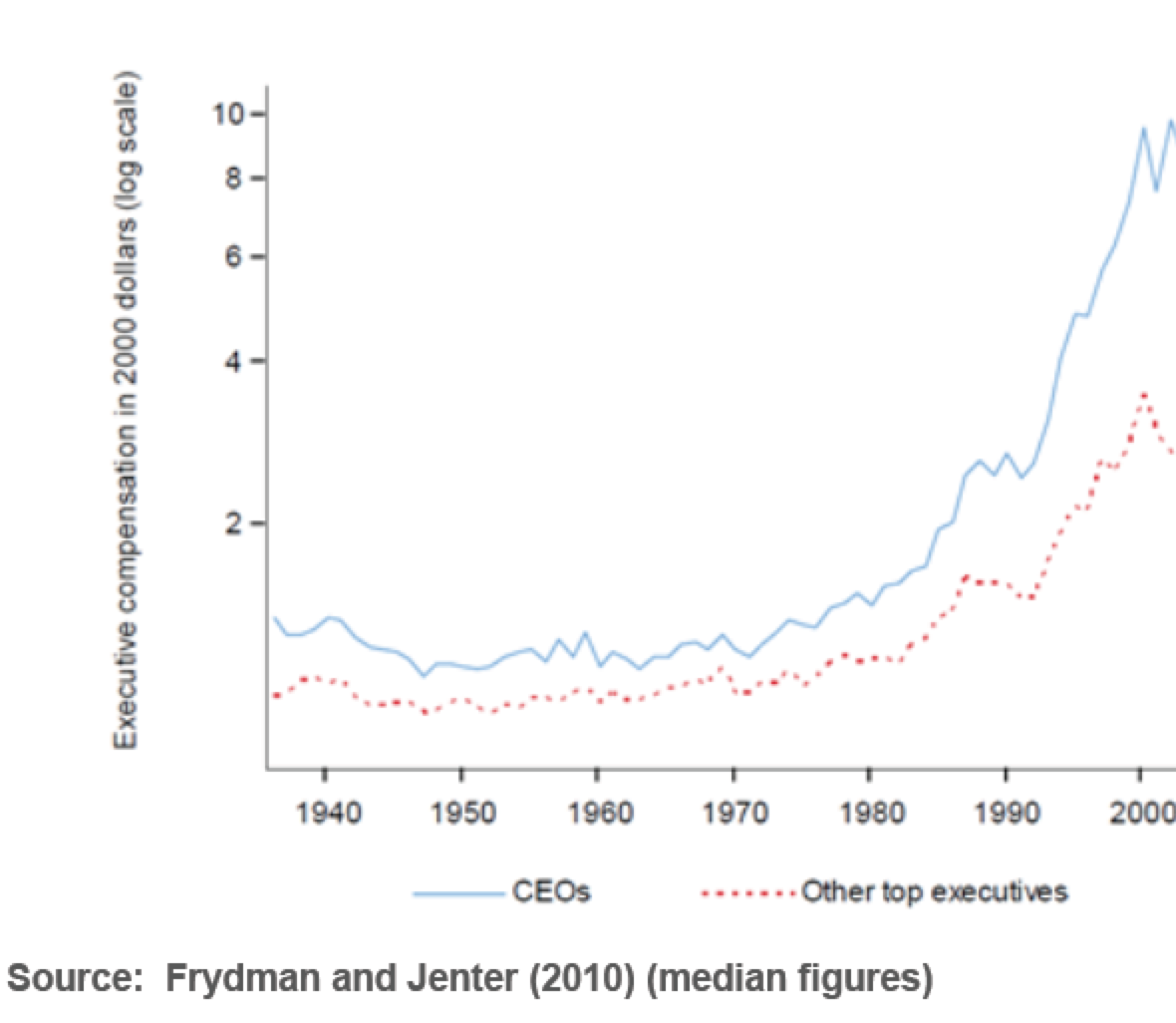 Concluded talent isn’t transferrable, except in unusual circumstances, such as at a much smaller company. Peer group methodology completely flawed. Hay Group started peer groups as a sales tool. Theoretical basis was transferability of talent. Always want to pick aspirationally.  50%, 75%, 90%  Success rate of move is much lower than internal candidates. Company specific. Pay internal candidates less, even though they do a better job. Rather than create external matrix, DuPont pays a fixed multiple of internal pay. Get away from peer groups. They create internal dissention. If CEOs can’t really move anywhere with ease, we should be able to make their pay more reasonable. IRRC Institute  Elson and Ferrere. Powerpoint (in pdf). 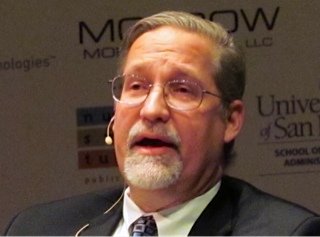 Peer group developed through proxy information.  Most look at talent as transferrable. It is the associated disclosures that drive pay because of jealousy and envy. Mismatched peers. Problems with peer groups. Almost always caveat with 50%. Actual pay based on negotiation. Boilerplate disclosure. Does CEO increase more than NEOs? Yes, probably (see chart to right). CEO is harder on underlings than boards are with CEO because terminating a CEO is so much higher of a risk.

Shareowner perspective on peer groups. Say on pay distraction. Difficult to second guess. Pay negotiation shouldn’t involve shareowners. They do utilize peer groups. Isn’t much mobility but gives us a reference point re competitors. Some investor have had board members ask them to vote against pay package.  That’s taking shareowner/board collaboration to a whole new level but is also an indication the board isn’t really doing its job.

Some companies go to top shareowners and check with them on pay metrics before finalizing. Some don’t use peer groups but most are probably mindful of peers. Some provide the minimum amount of compensation to be fair to the CEO. Mentality in US is to push up; not to hold down.

Yes, they game but overall numbers are compared. Leapfrogging based on outliers in peer group. Developed in 1948 at a restaraunt to sell “Hay points.” Got CEOs to write their pay on a slip of paper and disclosed anynomously to others. Where significant disparity between CEO and NEOs, lots of discomfort. Ira Kay debates Charles Elson  and research partner on YouTube.

CEOs do succession planing for their staff more than boards do.

Smell test in determining pay out of line. Go back to independence of board, conflicts of interest, equity in company. Advisors rather than fiduciary monitors. Explanations problematic. Meet with shareowners. Boils down, at least in part to the fact that we don’t have adequate means to replace directors.

Would more discretion be more helpful? IRS 162(m) problem… you can lower pay at end of year but not raise. Increase in pay is an opportunity that creates structural problems. Opportunities rise tremendously but boards don’t pull back. Linkage between performance and pay is weak. Discretionary plans are difficult to sell if they can be negative. Tax exposure issue not that big in most cases if company wants to take another approach. Elson thought it was a bad idea from the beginning. Notion of taxation to change behavior shifted companies into options. Tax is for revenue, not to reign in pay. Whether you use peer group or not, that’s how CEOs will assess their pay and that how shareowners will do it.  Equilar makes it easy to find. Shifting now from grant date to realized pay.

The danger of the quiting and going elsewhere is small. They have no place to go… although if you pay them too much they may retire.

Discretion is fine but more disclosure is needed. Counter is to disclose history of bonuses. Outside hires – most get 20% above. Internal gets less than prior CEO. Is it groundhog day or a new day dawning? Pay should come down. DuPont uses fixed ratio of 1.5 times direct reports. Much more of a corporate culture. They have always hired internally and it has worked relatively well. They know they need succession planning.

Concept of speaking to shareowners before vote. Funds look for alignment with shareowners. Subjective judgements. 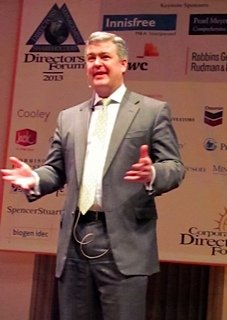 Reforming Wall Street and protecting consumers is like mom and apple pie. Stated purpose of SOX is to protect investors but biggest beneficiaries are accountants, attorneys and foreign markets. Costs of compliance substantially higher than estimated. Regulators responded in attempting to address section 404 by allowing time. Congress created some exemptions but much damage is irrepairable re IPOs and marked increase in going private. Loss of IPOs to London and Asia.

Dodd-Frank – sheer volume of rules required include many related to corpgov. Many are couched as disclosure but are actually aimed at moving behavior. Hard to find material reason for conflict mineral regs or reporting CEO pay ratio compared to median pay. Not material to general population of investors. Incredibly costly to issuers.

Say on Pay not binding. However, limiting language hasn’t held back lawsuits. Decrease of retail owners holding in their own names and rise of institutional investors. Proxies today are remarkably longer, more technical and too difficult to read. Institutional investors rely on proxy analysts. Are they fulfilling their fiduciary duties or is it just Quack Corporate Governance: Round Two – Bainbridge?  Too many relied on credit rating agencies with disastrous results. Accountability for accuracy, conflicts of interest (rating while consulting). Mindful of regulating proxy analysts. One size doesnt fit all. Need flexibility. See the Comment letter from the Delaware Bar addressing Proxy Access. Flexibility better at state level. States can more easily rectify. Have active bar, legal precedent. SEC should respect the role of state.

Discussed Corp Fin Interpretive release re 206(3)-3T and new guidance on how they are doing rulemaking. For another perspective, see The Long Road Back: Business Roundtable and the Future of SEC Rulemaking by Jill Fisch.

Manipulation of stock price. Not a great deal of attention focused on that. Also discussed getting at conflicts of interest by rating agencies. See Senator Al Franken’s effort to have agencies assigned. Also discussed what changes might be expected with the arrival of Mary Jo White. Worked with her, credible. Many regulations have been rushed out to meet unreasonable deadlines. Priorities will be up in air again with Mary Jo. Staffing is tough. Staff is working like crazy working years straight with long hours. See Federal Agency Workplace Survey: SEC’s Rank Is #4 Worst Mid-Size Agency.