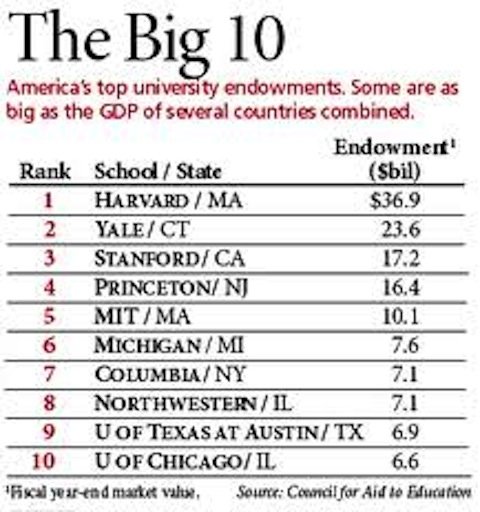 Not sure what year; probably outdated.

About a month ago, I posted a piece aimed at getting students and alumni at Harvard (and hopefully at other universities) to advocate for more democratic endowments. In my zeal to focus on endowment governance, I was far too dismissive of the movement at Harvard and hundreds of universities to divest of fossil fuels. While I still think endowment governance is central, after further examining the issue, I have come to believe divestment of fossil fuel companies is likely to be a very important part of a larger movement to ensure a salubrious planet and one which should also be compatible with more democratically governed endowments.

Perhaps explaining the evolution of my thoughts will help others have a similar conversion.

In reviewing the Investment Policy Statement of the Fair Harvard Fund, I expressed my opinion that their strong emphasis on negative screening reminded me of where SRI funds were 20 years ago (Fair Harvard Fund Makes Progress: Alternative Endowment Should Be Permanent & Democratic):

Although many funds still have some negative screens, they have moved substantially toward an emphasis on engagement and governance. I hope Fair Harvard will do the same. I urge the Coalition and Fund to carefully review examples such as the Global Principles of Accountable Corporate Governance adopted by CalPERS.

In support of my position, I quoted from Robert Monks’ brilliant new book, Citizens DisUnited:

Divestiture is tantamount to declaring moral victory, deserting the field of battle, and leaving festering in place whatever was offensive enough to merit the divesting, along with CEOs who frankly don’t give a damn who owns the stock as long as someone does.

My thinking was similar to that expressed more recently by M. Todd Henderson on the Huffington Post in Divestment and Financial Illiteracy.

The state of financial literacy in America is rotten. A Dodd-Frank-Act-mandated study of financial literacy recently concluded: “investors have a weak grasp of elementary financial concepts.” Or, consider the 2009 National Financial Capability Study finding that only 52 percent of investors understand owning a broad basket of stocks provides a safer return than investing in a single company stock. This is like saying 52 percent of people believe in gravity.

The stock price is merely an estimate of the cash flows that ownership of the stock will produce in the future, and therefore is not determined by a “demand” for the stock. Unless the sale of stock conveys information to the market about the future cash flows, no individual sale can move the price…

And nothing about the decision of a few university endowments to sell the shares provides the market information about how much oil or coal will be sold at what prices tomorrow. This is true even if SJSF succeeds in getting every university to sell all their shares…

Perhaps the real lesson of the divestment wave building on American campuses today is that colleges should devote more time to teaching economics and elementary finance to their students. Armed with some basics, these well-meaning students would be able to make a much bigger impact on our world.

The model divestment that actually worked was, of course, decades ago involving companies with substantial investments directly or indirectly supporting apartheid in South Africa. That worked. One major difference is that campaign was accompanied by boycotts. I don’t see a lot of boycotts of fossil fuel companies, even coal companies. Soon after my post about the Fair Harvard Fund went up, I got a thorough and well deserved drubbing from someone much more involved in that and other such efforts than I have been.
He had several lines of rebuttal. It is up to the students and stakeholders to determine how they incorporate their ESG issues in a way that can be consensual among these diverse groups, and there remains a strong interest in getting out of bad businesses.Why engage with Chevron, Philip Morris, or Smith & Wesson, all the while hoping your portfolio reaps benefits from the harmful work they do, as manufacturers of socially and environmentally harmful products and as corporate lobbyists corrupting our political processes?

Exiting companies and sectors is not all the Coalition is doing.  They are very interested in proactive investment in sustainability and in more robust conceptions of ESG incorporation and optimization, not to mention active ownership strategies.

The Coalition needs to be very realistic about what one can do with the relatively small amount of seed funding that the Fair Harvard Fund has raised to date — and devote their energies to the places where they can have the highest impact.

Screening is not about withholding capital from companies; it is about profiting, or hoping to profit, from businesses with which you fundamentally disagree — and may be boycotting as a consumer.  At the same time, divestment at scale does have financial effects. This is one reason why tobacco companies trade at an intrinsic discount from valuations and why they find themselves obliged to pay higher dividends to investors without scruples related to their fundamentally unhealthy business — heavily shaped by policy and litigation risk.

As it happens, the Coalition is in the process of launching the ownership dimension of their campaigns — focused not just on proxy voting — which Harvard has been doing for four decades, with little impact or success — but also on taking responsibility for their controlling stakes in the billions of dollars of equity they have in various alternative investment funds and private companies, often having deleterious impacts on the communities in which they are operating, in places like Latin America and other offshore locales.  It is an accountability agenda for HMC and the Harvard endowment, and I trust the students and members to exercise their best judgment about the demands they are putting forward, which include incorporation of ESG across all asset classes.

After these comments, attending the 2013 Ceres Conference, and doing a little more research I’m almost there.

The Coalition itself has raised less funds than I imagined, so realistically investing in a mutual fund is the most realistic option at this point and one that invests in alternative energy makes sense. As to the question of divesting of fossil fuel companies, one bit of information I found compelling is that in the 2012 World Energy Outlook, the International Energy Agency states that “[n]o more than one-third of proven reserves of fossil fuels can be consumed prior to 2050 if the world is to achieve the 2 degree Celsius goal,” generally recognized as the level beyond which global warming will have dire ramifications.

It seems almost certain that a substantial portion of at least the dirtiest fuels, like coal, will become “stranded assets.” Oil analyst Paul Spedding and others estimate in an HBC report, Oil and Carbon Revisited: Value at Risk From ‘Unburnable’ Reserves, that loss of potential value from assets no longer needed in a low-carbon economy would range widely from almost none in the BG Group to 17% of market capitalization at Statoil.  “We believe that investors have yet to price in such risk, perhaps because it is so long term.”

Company valuation and credit ratings methodologies do not typically inform investors about their exposure to these stranded assets, despite these reserves supporting share value of $4 trillion in 2012 and servicing $1.27 trillion in outstanding corporate debt over the same period.

The Carbon Tracker Initiative calls for:

It looks to me like it would be foolish for any endowment to hold assets in the dirtiest companies that are probably facing a huge devaluation of assets that has not yet been priced in by the market. It also doesn’t make much sense for a university like Harvard to be spending time and money on Sustainability at Harvard when their investments work for and send the opposite message. The safest way to proceed might be to simply divest and render the endowment fossil free.

Another possibility would be to file resolutions at fossil-based energy companies in the endowment similar to that filed by As You Sow at CONSOL Energy, although I think their proposal could it be strengthened by hinting at the possibility of redirecting the company’s capital and the skills of its employees to other possible lines of business. According to the WSJ, After Bubbles in Dotcoms and Housing, Here’s the Carbon Bubble,

the proposal received 19.7% of the votes cast. That is well short of a majority, but shows that a small but not insignificant minority of institutional shareholders saw some merit in at least looking at the question of how much coal the company will be able to burn.

As You Sow did a great job at CONSOL (CNX). See, for example, their Unburnable Carbon – Stranded Reserves. Almost 20% is fairly high for a first time effort on an issue that many still seem unwilling to contemplate. Selling off the carbon bubble before it bursts might be the most prudent course of action, while filing resolutions might do the most to raise awareness of the issue. The endowment would only need to retain $2,000 worth of stock in each company to file a resolution, so maybe a combination of the two strategies would do the most to further the objectives of the coalition working on the Fair Harvard Fund.

As for my own portfolio, I sold off my only direct holding in an oil company but see I still own stock in a company that does oil and gas exploration.  I’ll sell that one too and while I’m not boycotting, I’m cutting back.