Maybe the SEC would be better off hiring the Yes Men to handle their rulemaking, rather than Robert Rice as SEC counsel, which could have a chilling impact on the SEC’s whistleblower program. (see SEC Chair Mary Jo White’s first big test by Eleanor Bloxham)

The Yes Men today implored the US Chamber of Commerce to reconsider their recent decision to withdraw the lawsuit they filed nearly four years ago, in a press conference on the steps of the lobbying giant itself. Said former defendant Andy Bichlbaum of the Yes Men, 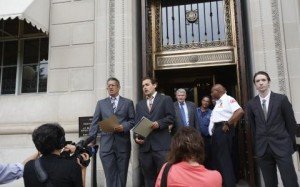 Just as their case against us was finally heating up again, the Chamber decided to drop it. The Chamber knew this was our chance to challenge their silly claims and, since they claimed we had ‘damaged’ them, investigate the details of their finances through the discovery process. It’s the height of rudeness to deprive us of this great opportunity.

“The Chamber’s lawsuit represented the only time in 17 years that anyone has been stupid enough to sue us,” said former defendant Mike Bonanno. “This was the chance of a lifetime, and we profoundly deplore the Chamber’s about-face.”

The Chamber sued the Yes Men and collaborators in 2009 after the activists held a press conference as the Chamber and announced that they were going to completely reverse their regressive environmental policy and support emissions reduction legislation. In their complaint, the Chamber claimed that the phony announcement was “commercial identity theft” and accused them of cyberpiracy, trademark infringement, and false advertising. The Yes Men had legal help from the Electronic Frontier Foundation and Davis Wright Tremaine, and were eager to fight back against this attack on political free speech.

“In just the last fifteen years, the hoaxsters at the Chamber have spent nearly a billion dollars lying to children and adults, and generally lobbying for corporations and against humans,” said Bichlbaum. “This lawsuit gave us a chance to help reveal the Chamber’s many hoaxes to the public.”

The Yes Men are considering a lawsuit against the Chamber for depriving them of the opportunity to expose them. “Tell ’em to put their damn helmets on,” said Bonanno, echoing Tom Donohue’s words upon launching the Chamber lawsuit in 2009. No lawyers have thus far volunteered to take on the new Yes Men case.

Click here for a transcript of the press conference and here for the Electronic Frontier Foundation’s statement on the case.