Inside Investor Relations (IR) had an important article on July 30th, On the Way to the Investor Forum that raised the question: do companies really want to encourage their shareholders to chat about them in online forums? Wouldn’t it create a lot of work for investor relations officers (IROs) “who are responsible for monitoring these online groups, responding to any misinformation posted on them, dealing with legal and other consequences?”

The article cites the rare example of a Spanish company willing to meet that challenge head on. “Iberdrola, the Spanish utility that is often cited as the firm that’s gone furthest along this path with its own version of a shareholder forum, the On Line Shareholders (OLS) system.” Iberdrola’s investor relations are apparently well respected by the investment community, recently ranking 23rd among all European companies (see the IR Magazine Investor Perception Study – Europe 2013). 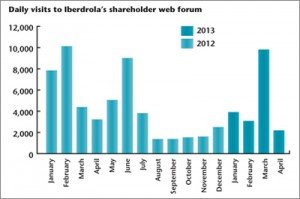 IR interviewed Ignacio Cuenca, who heads Iberdrola’s unique OLS system, “Iberdrola wants to be close to its shareholders and offer them the opportunity to ask anything at any time,” he explains. Cuenca’s seem a little apologetic because, so far, they are only reaching about 1% of their shareowner base, but they are averaging 3,000 visits a day… and he claims it only takes his multidisciplinary team about an hour a day. I find that impressive and I love the app they’ve developed. Check it out.

IR observes that most companies do use forums, except in the run-up to annual meetings. I think even that is rare. According to IR:

Broadridge offers two versions of its systems for online interaction with shareholders: virtual shareholder meetings, which enables companies to avoid those unpleasant experiences that might occur at AGMs with live shareowners (See CII policy under item 4.7); and virtual shareholder forums, which are much more like the Iberdrola idea, but which are used by fewer than 20 companies, mostly those with a high retail shareholding.

While writing this post, I logged into Broadridge’s Shareholder Forum and checked out a few of the companies in my portfolio. The 2013 Facebook Stockholder Forum allowed users to submit a pre-meeting question for the annual meeting that was held 6-7 weeks ago. Broadridge’s own shareholder site had a little more in the form of several informative videos of performance for fiscal year 2012. Again, it allows shareowners to submit questions in advance of the annual meeting… the November 2012 meeting. Likewise, TD Ameritrade’s site has even a little more information and several videos, and again shareowners are invited to submit questions in advance of the February 13, 2013 annual meeting. All the forums I looked at were out of date and allowed submission of questions but provided list of questions asked or answers. Is that really a forum?

IR quotes Andrea Wentscher, of BASF in Germany who I think expresses the predominant opinion:  “Shareholders can send us an email, call us or post their questions on the different BASF social media platforms but we don’t want to give them a way to talk among themselves – certainly not via our own website.”

Talking among themselves could be dangerous. Institutional investors, especially large ones already contact IROs; “if we had negative or potentially offensive comments we’d have to take them down, which could be deemed to be selective in nature.”

I recently attended the Millstein Governance Forum in New York. At a panel on new communication technologies someone mentioned that only 25% of boards (I hope I have that figure right) have policies for directors. I was surprised when one of the panelists responded that no policies are needed because companies should be “speaking with one voice” and directors would have no business using Twitter, Facebook, etc. in their official capacity.

Sheryl Nance-Nash does a nice job of discussing this issue for the Corporate Secretary in Boards remain uneasy about social media, says women’s directors group. She reports that boards are uneasy about the use of social media because directors tend to be old and unfamiliar with it, they see it as a time drain and of little value. Yet, that’s where major growth in the economy is occurring. There may be a gender gap, however, with women directors likely to be more social media savvy than their male counterparts. According to Cathy Allen, a director on the boards of Synovus Financial Corp., El Paso Electric Co. and Stewart Information Services, “women tend to be more attuned to customer service and consumer behavior issues.” They’re probably younger on average as well.

Allen adds, the use of social media to influence proxy voting “is a growing trend and potential threat with activist stakeholders. “If your firm is not on social media, or not monitoring it, there is a risk of reputation damage… Firms must have both defensive and offensive strategies for social media and boards need to understand how important this is.”

More companies, especially those dealing directly with consumers, are beginning to realize unanswered tweets that go viral can destroy significant value. Soon they will learn the same is true in the area of shareowners and corporate governance. There have been some instances, even as far back as the year 2000 with a campaign by Les Greenberg and Committee of Concerned Luby’s Shareholders, of shareowner actions that gathered momentum on message boards at Yahoo Finance.

But StockTwits, Yahoo Finance, and other social media sites weren’t designed to help shareholders assume their role as shareowners. I’ve never had any luck using them to carry on much of a conversation with other shareowners or with companies, except in one instance. Back in 2006 I had a running dialogue with John Mackey of Whole Foods who was using the screen name “rahodeb.”  I didn’t know he was the CEO. I just thought he was a fellow shareowner with a bad temper and a poor grasp of the legal rights of shareowners. (see Whole Foods CEO’s online chats put his integrity in question) Most of the chat rooms or message boards concerned with stocks are inhabited primarily day traders, focused on pumping and dumping or shorting stocks.

Sharegate.com, a new entrant now in beta, appears to be an exception. Sharegate facilitates dialogue between shareowners. Remember Andrea Wentscher cited above? “We don’t want to give them a way to talk among themselves – certainly not via our own website”…  dangerous to the current order. Shareowners collaborating is already starting to happen on Sharegate. However, Sharegate also attempts to facilitate dialogue between shareowners and companies. Most companies have yet to respond and you can read Sharegate’s frustration in a recent post (Investor Relations Missed Opportunities) by CEO, Argus Ian Cunningham.

A few weeks ago, Sharegate member AB Analytical, an analyst firm with a 65,000+ audience, utilized our Share Ask tool to submit inquiries to several companies it was interested in writing about. When AB Analytical posted each Share Ask, the inquiry appeared in the company’s profile page on Sharegate, the dashboards of all shareowners, and the dashboard of all of this member’s audience pages on Sharegate. Sharegate also sends the inquiry to the company’s IR address, and of course we await its response.

When a response is received, those same application interfaces are updated with the company’s response. If the company doesn’t wish to or is legally prohibited from disclosing requested information, Sharegate features a built-in a tool for posting Regulation FD (Fair Disclosure) responses and setting quiet periods, allowing the IR department to constructively address these issues – instead of just ignoring them.

Sharegate also hopes to reduce the number of redundant inquiries, as members can search our archive for previous questions.

Considering all the positives to be achieved from IR activities such as these, one might wonder why an IR department would choose to ignore shareholder inquiries.

I’ve submitted several Share Ask‘s to companies on corporate governance issues as well, without response. My next step is to discuss possible shareowner proposals at these non-responsive companies. I’ve submitted dozens of shareowner proposals, so this is not a new route for me. However, I was looking forward to the possibly avoiding all that work (drafting, obtaining verification of ownership, submission, responding to “no-action” requests, and traveling to the AGM to make a presentation). Company participation would at least help both parties ensure they have the facts straight. Out of that conversation we might even start discussing possible alternatives. It looks like we aren’t quite there yet. Sign in to Sharegate and take a look at the posts and discussion on my potential proxy access proposal at Reeds, Inc. ($REED). Yes, it is time to move beyond the S&P 500.

Debate: Investors Do Not Practice What They Preach
Vote Splitting: Are We Moving to a Universal Proxy?

One Response to Investor Forums