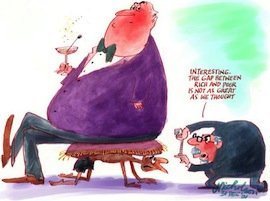 The richest 300 people on earth have as much wealth as the poorest 3 billion. This is no accident; those in power write the rules. Together, we have the power to change those rules. Technology and the shift of global power mean that we can now demand our say in decisions that have traditionally been made by elites behind closed doors. TheRules.org operates as a decentralised network with several campaign hubs around the world, including in Johannesburg, Nairobi, Mumbai, New York, Toronto, and Rio. Each hub identifies issues, opportunities, technologies and regional strategies for each campaign.

A Working Group of 70 helps create campaigns for viable, alternative rules that serve the interests of the world’s majority, with disproportionate benefit to the poor, vulnerable and marginalised among us. Issues identified on their site include taxes, land, climate, food, health, women/girls, and trade but nothing on corporate governance. Ask them about who they are and the way the work by emailing info@therules.org. To be considered as a member of the Working Group, send an email to campaigns@therules.org. At this point, I don’t see anything that indicates the group recognizes the rules that govern corporations are key.

TheRules.org is supported from a variety of sources, including Purpose, the New Venture Fund and through crowdfunding.

Reeds, Inc. (REED): My 1st Attempt to Collaborate Through Sharegate
Debate: Investors Do Not Practice What They Preach