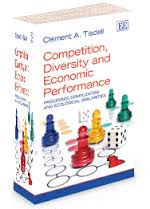 Mainstream microeconomics has emphasized the search for perfectly competitive markets within a framework of equilibria in a quest to maximize economic efficiency. Tisdell argues that intense competition can reduce economic performance. He concentrates on market adjustments and the evolution of economic systems where the role of diversity, product niches, cooperation between firms and comparisons with intra-species competition and inter-species competition. That basic premise rings true to me, since our environment is in constant flux.

His analysis certainly appeals to my sensibilities as a student of the sociology of knowledge, since he reminds us that, unlike other species, humans can “take deliberate actions to prepare themselves for future predicted events, or in come cases they can alter the course of these events to yield outcomes which they prefer.” Evolution is no longer a “blind” process, but can be consciously influenced.

There is a common belief, outlined in Adam Smith’s Wealth of Nations, that increased business competition promotes economic efficiency and stimulates economic growth. Vilfredo Pareto outlined through mathematical proof that, given specific assumptions, perfectly competitive equilibrium results in the optimal allocation of resources – it is impossible to make any individual better off without making another worse off. Yet, this widely adopted approach assumes a static economy. Tisdell argues that even in such a static setting, increased concentration can improve economic performance by improving internal economies of scale. In a dynamic setting, such as ours, possible improvements in efficiency can be held back without some shielding.

An environment that promotes innovation can be more adaptive than one that promotes intense competition. This is especially true in high tech firms driven not so much by price competition but by product differentiation based on intellectual property. Balance is needed in competition and barriers to entry if we are to ensure successful innovators are incentivized. Tisdell explores both consumer dynamics (early adopters, followers, laggards) and supply-side considerations, especially the need for and advantages of diversity. He concludes that economists should give greater attention to business cooperation and mutualism, paralleling arguments of made by Marian Dawkins in animal behavior.

Further concepts explored are mining a niche borrowed from ecology, path dependency, economic globalization, substantial economies of scale, sunk costs, the increased prevalence of networks in economic activity, intensified market competition resulting in low profit margins, and that a tax on market transactions can improve economic performance. Tisdell warns that markets are unlikely to be very efficient in selecting firms that will be the most efficient in the very long term because markets operate on the basis of relatively short-term considerations.

The book is chocked full of challenges to dominant economic theory but managers, directors and shareowners will find many discussions have immediate practical application. For instance, current best practice considers the economic performance of each of a firm’s divisions as a profit center, incentivizing division managers by linking their pay to profits contributed to the larger firm. Tisdell demonstrates that such arrangement are subject to ‘market’ failures arising from market transaction costs, lack of synergy between divisions and inadequate knowledge about the relationships needed to determine optimal transfer prices. For example, loss of knowledge from outsourcing can easily outweigh short-term ‘savings.’

Startup Governance: Getting the Most from Your Board
Video Friday: Who's Winning the War on Corporate Governance (and should you care)?