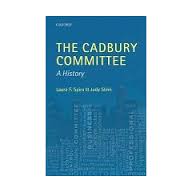 The Committee was formed in 1991, the same year I read Power and Accountability: Restoring the Balances of Power Between Corporations and Society

by Robert A.G. Monks and Nell Minow. I had spent years in academia searching for the perfect corporate form. I studied corporate systems around the world and headed California’s cooperative development program. It was obvious to me the dominant form of corporate governance in the US and UK needed improvement.

Monks and Minow brought confirmation from experts in the field. The appointment of the Committee on the Financial Aspects of Corporate Governance, better known as the Cadbury Committee, in May that year by the London Stock Exchange, the Financial Reporting Council, and the accountancy profession meant even those running the markets knew something was wrong. Real change was possible.

The Cadbury Committee: A History

takes the reader back to those days to see how changes happened and why. Thankfully, Laura F. Spira and Judy Slinn took the initiative to document the Committee’s history while many members are still alive.

Sir Adrian Cadbury wrote a forward for the book and lays out the terrain.

The fundamental failure of board process at the time was the failure to distinguish between governance, which is the responsibility of the board, and management, which is the task of the executives, appointed and monitored by the board… the posts of chairman and chief executive were combined in over half of the top 1,000 companies… It was customary for chairmen to appoint non-executive directors from among the circle of those whom they knew… Only just over half of the top 250 UK industrial companies even had audit committees…

The book succeeds overwhelmingly in its three simple but important tasks: Record how the Committee originated, provide insights into how it operated and document reactions to its publication and recommendations.

The first two chapters discuss the history of corporate governance, with a focus on the UK, more recent economic cycles, precursors to the Committee and how the Committee was formed. For example, the 1973 Watkinson Committee called attention to the “increasing, and dangerous separation between ownership and control… alienation of those who work in the business… the interests of the workers are too often ignored.” As an American, I had no idea how close the UK came during this period to establishing two-tier boards of directors, to include employee representatives.

Chapters 3 and 4 go into detail about various briefings between members, initial thoughts, how the Committee did its work and made decisions. Various groups and subgroups tackled issues and, of course, integration of papers and comments was a difficult task. The initial draft got considerable attention even from bystanders, such as me, from across the ocean. People all around the globe recognized the impacts of the Committee’s work would likely extend far beyond the UK. I was not convinced that self-regulation would accomplish much. Spira and Slinn do and excellent job of highlighting coverage by the press without getting bogged down in detail. Had accountants gotten off too lightly? Were the days of multiple non-executive directors numbered?

The Committee fought back against criticisms and came up with innovations, such as comply or explain as a condition of listing. Of 209 initial consultation responses, 117 were ‘generally supportive,’ 20 ‘not generally supportive,’ and 72 mixed, expressing reservations about particular aspects of the report. The authors discuss some of the more controversial provisions of the draft and how comments were addressed or disposed of. The definition of corporate governance changed from ‘the system by which companies are run’ to ‘the system by which companies are directed and controlled.’

The final report was published on December 1, 1992 and was sent to the chairmen of all companies listed on the London Stock Exchange, including the innovative comply or explain provisions. Positive support for the Committee’s work was widely reflected in the press, although many continued to express concern about various elements, such as enforcement. Chapters 5 and 6 cover launch and follow-up – how questions were handled, what organizations took what roles, etc.

Cadbury had thought once the Report and Code of Best Practice were delivered, ‘we could retire to cultivate our gardens.’ By 1998 his had visited 28 countries, some more than once, to brief conferences on corporate governance and the Code.  Corporate governance was a new subject of discussion even though it had been discussed for years without those words and without a framework of ‘best practices.’ I got caught up in the whirlwind myself, giving a speech to International Company Secretaries Conference in Hong Kong in November of 1998.

Final chapters cover the Committee’s successor and lasting contributions, with diners getting substantial credit as a mechanism for exchanging and moving views. Of course, once the Committee’s Report was issued, it became the central tool in promoting dialogue between boards and shareowners and was widely copied in other codes around the world. The Cadbury Committee: A History

is a fine tribute to the pioneering work of the Cadbury Committee, which continues to influence corporate governance, business and culture in the UK and throughout the world. Spira and Slinn have documented the exceptional work of the Committee and how it was able to meet its task. Anyone interested in the history or corporate governance or in how to effectively operate a committee will draw a great deal from this slim volume.