Should boards reexamine stock buybacks? That was the subject addressed by a distinguished panel during a recent SVDX program hosted at Stanford’s Rock Center for Corporate Governance. What follows is the SVDX meeting pitch, with issues and brief bios, followed by a few of my observations at the event. Watch the video wrap-up (below) from WMS media Inc.

Companies routinely adopt and typically justify programs to repurchase their shares for the following reasons, among others:

Even Apple announced this week plans to increase its $10 billion stock buyback program announced last year to $60 billion through 2015.

But despite the popularity of such programs, financial advisers are increasingly criticizing them as mere accounting maneuvers to increase earnings per share without any substantive improvement to the company’s performance. While perfectly legal and well within the protection of the business judgment rule, should boards look more closely at what these programs entail, how they are justified and what unintended consequences may ensue? 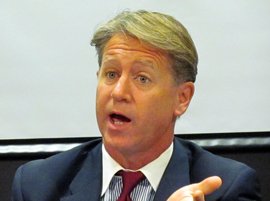 Rex Sherry has been a technology investment banker for the past 25 years. He currently is a senior advisor with ATREG, an advisory firm specializing in the sale of manufacturing assets and related businesses for global semiconductor companies. Throughout his career, he  has been involved in meeting the needs of large and small technology growth companies in the areas of private placements, initial public offerings, secondary public offerings, debt and mergers and acquisitions. Areas of expertise in the technology sector include the electronics and clean technology fields.

John Kelm is an audit partner at Deloitte & Touche LLP with 32 years of experience in Silicon Valley, serving companies in the technology industry ranging from start-ups to multi-nationals. He is a designated specialist in Deloitte’s technology, media and telecommunications practice and has led Deloitte’s service to numerous high-growth technology organizations with a concentration on global equipment, software and internet companies. John has assisted his clients in more than 20 M&A and public equity and debt offering transactions in the past five years. 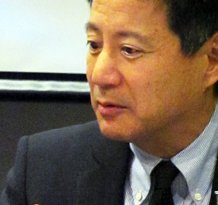 Gordon Yamate chairs the board of trustees of the Japanese American National Museum headquartered in Los Angeles and currently serves as a member of the board of directors of the Silicon Valley Community Foundation. As an adjunct lecturer in law at Santa Clara University Law School, he teaches a seminar level corporate governance course that bridges ongoing legal developments in the corporate governance arena with practical strategies for the general counsel in advising management, monitoring corporate compliance and providing leadership in challenging governance matters

This program, like all SVDX programs, is subject to the Chatham House Rule.

Open market purchases are generally made under safe harbor provisions to ensure executives are not manipulating the market or trading on inside information. Since a buyback can have a material impact on the market, a press release is usually issued before implementation.

Accelerated share repurchase (ASR) is another option, especially if the stock is currently undervalued. A firm might choose the ASR method as a way of reducing the number of shares outstanding for a fixed cost, transferring the risk to the investment bank (which is now short the stock) for a negotiated premium.  The company commits significant capital right away. Paying for certainty of price, rather than chasing price. Fees are usually less than 1%.

Keep in mind, a company’s investor base changes in stock buybacks, as some owners sell out and more committed owners keep their stock. A buyback helps option owners as well.  It is critical to understand the impact of any buyback on compensation triggers.

Cash offshore can’t be used for a buyback.  Working capital can be borrowed against.

I asked why more companies don’t do like Berkshire Hathaway and put their pots of money to better use than buying Treasury bonds. Apple has almost as much as CalSTRS. The response was something the effect that investors don’t want cash used for speculation. I was pointed to auction rate securities, which didn’t work out and the Investment Company Act. It is all about cash preservation, rather than speculation.

I don’t see either as anything like I proposed. If someone can enlighten me, I’d appreciate it. Email comments/explanation.

Dividends create something of a floor and an expectation they will be repeated. Bank advisors get nothing when a company declares a dividend, so they are more likely to advise buybacks.

Considerations: Directors are protected by the business judgment rule, even though they benefit. Does the company need the cash? Can we get a better return on investment from acquisitions, R&D. Warren Buffets rule: are you buying stock back when it is undervalued? It must be good use of cash.

Organic growth: who can we buy, who buys me?  Board should be able to articulate their strategy before activists show up. At minimum you’ll want advice from an investment banker on valuation (to ensure the company is not buying back at too high a level). Set prices based on expected results of the company. Buybacks can be much more easily turned off and on than dividends. The more international the company is the more complicated it becomes.

Can you cancel 10b5? Yes, you need to make an announcement but by the time you do, it may be obvious. Quarterly filings must disclose purchases. How many shares bought at what price? If terminate, you have to announce termination. You are not obligated to continue it. 10Q or 10K reporting.

Directors must do their due diligence. Have point of view relative to any plan and uses of capital. Investment bankers can help you frame the decision. Board has to understand how their business generates value.  What are the chances of someone buying you? You buying someone else? Caution: director liability if you need the cash for operations. Are we really protected by business judgment rule (Citigroup claim re subprime mortgages)?

Signaling. Am I signaling that we’re no longer a growth company. Perception issue. We don’t want to buy back when the intrinsic value is lower than the buyback price.

Buyback. Concentrating intrinsic value with fewer shareowners. You will be losing shareowners that have less faith in company. Activist shareholders often believe stock is undervalued and may stick with the company.

It was a good turnout for a great discussion. Watch the video wrap-up (below) from WMS media Inc. I hope to see readers at future SVDX and Rock Center events. If you see me, please introduce yourself.