Yesterday, in Part I, I discussed the most recent UC Davis Study of California Women Business Leaders: A Census of Women Directors and Executive Officers and how it led me to invest disproportionately in firms with more women CEOs and NEOs. Just how are women different than men and what kind of changes can we expect or hope for? 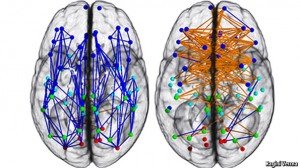 MEN and women do not think in the same ways. Few would disagree with that. And science has quantified some of those differences. Men, it is pretty well established, have better motor and spatial abilities than women, and more monomaniacal patterns of thought. Women have better memories, are more socially adept, and are better at dealing with several things at once. There is a lot of overlap, obviously. But on average these observations are true…

the cross-talk between them in women, suggested by the wiring diagrams, helps explain their better memories, social adeptness and ability to multitask, all of which benefit from the hemispheres collaborating. In men, by contrast, within-hemisphere links let them focus on things that do not need complex inputs from both hemispheres.

As reported in Time magazine (Women on Corporate Boards: Do They Make Men THAT Uncomfortable?, 12/3/2013)

New research released last week by the University of British Columbia shows that having women board members has a substantial and positive effect on a firm’s value by reducing the cost and volume of acquisitions. This follows years of research by Catalyst showing that companies with three or more women on their boards outperform those without, to the tune of 53% uplift in returns on equity, and 66% on capital. Another report by the Credit Suisse Research Institute shows that businesses with women on their boards outperformed comparably sized companies with all-male boards by 26 percent.

The facts are plain, if puzzling: Not only do women enter college at higher rates than men, but they’re less likely to drop out once they get there. Female grads now account for about 60% of U.S. bachelor’s degree holders.

Does that mean men are less studious or committed than women are?

Not necessarily. Instead, it seems the gender gap’s roots are partly financial: Men are less willing to take on the heavy debt loads that are increasingly required to complete a college degree. When they reach the point of owing $12,500 in school loans, men “are more likely to be discouraged” than women — and to decide it makes sense to leave school and start working full-time.

That’s according to a new study, “Gender, Debt, and Dropping Out of College,” published in a recent issue of the journal Gender & Society. The researchers, three professors from Ohio State University and Pacific Lutheran University, analyzed data from a national longitudinal study of youth from 1997 to 2011, funded by the Bureau of Labor Statistics, that included interviews with about 9,000 men and women in their 20s.

It turns out that persistent wage gaps in the labor market play a big part in motivating women to finish school. In the short term, men who drop out face no financial penalty in their entry-level salaries. Women, on the other hand, pay a steep price right away for dropping out, since female dropouts earn entry-level pay that averages $6,500 a year lower than what their male counterparts earn.

From that report, you would think substantive changes empowering women would be inevitable. Maybe, Young women are closing the pay gap, according to the Washington Post.  In 2012, young women aged 25 to 34 made 93 percent of what their male peers made, up from 89 percent in 2005. Yet, young women also reported sensing the deck was stacked against them.

Perhaps that helps explain the explosion in the number of women owned firms. If you hit a glass ceiling, build a new structure. According to  Growing Under the Radar: An Exploration of the Achievements of Million-Dollar Women-Owned Firms, over the last decade the growth in the number of women-owned firms with $10 million or more in revenues has increased by 56.6%, a rate 47% faster than the rate of growth $10M+ firms. 11 Reasons 2014 Will Be A Break-Out Year For Women (Forbes, 1/10/2014)

One of my favorite blogs, Sociological Images, recently noted 2014 is the 40th anniversary of the Equal Credit Opportunity Act, granting women the right to have a credit card in her own name.

And, thankfully, credit card companies like Banif know just how to make us comfortable, by combining feminism and infantilization and kissing our asses because We. Are. So. Special. “Every day is women’s day!” Wheeeee!

It was a world I well remember… my own mother not being able to get a credit card without my father’s signature. Years later, as I started my own career, I remember being in a class training to be a bank manager. The instructor was a woman but all my classmates were men. I asked why and was told something like, “no one would put their money in a bank managed by a woman.” Yet, apparently a woman was the most qualified person to teach us those management skills.

Under coverture, husband and wife were seen as one person as far as the law was concerned, and that person was the husband. A married woman could not own property, sign legal documents, enter into a contract, obtain an education against her husband’s wishes, or keep a salary for herself. She was required to relinquish her wages to her husband. In some cases, a wife did not even have individual legal liability for her misdeeds, since she was legally assumed to be acting under the orders of her husband. Generally a husband and a wife were not allowed to testify either for or against each other. As recently as 1972, two U.S. states allowed a wife accused in criminal court to offer as a legal defense that she was obeying her husband’s orders. 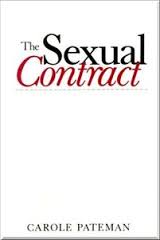 Many feminists understand the fiction and fraud of the coverture “contract.” However, there seems to be little recognition of the same type of fraud involved in the employment contract where the employer takes legal ownership of anything produced and carries the legal liability of employees. Carol Pateman’s The Sexual Contract is one exception:

The contractarian argument is unassailable all the time it is accepted that abilities can ‘acquire’ an external relation to an individual, and can be treated as if they were property. To treat abilities in this manner is also implicitly to accept that the ‘exchange’ between employer and worker is like any other exchange of material property. …The answer to the question of how property in the person can be contracted out is that no such procedure is possible. Labour power, capacities or services, cannot be separated from the person of the worker like pieces of property.

This same fiction, much like the fraud of coverture, is operating in our failure to prosecute the thieves of Wall Street because the companies they work for take legal ownership and legal liabilities for the de facto jointly created activities of their employees, except in the case of outright criminal activities by individuals. Slaves were also seen as mere tools of their masters but if they killed someone, all of a sudden they were human with their own will, and had to be punished.

With the historical experience of coverture being so recent, I wonder if the eyes of feminists are any more open than those of men to the idea of seeing businesses as potential democracies and all that entails. Neither workers nor shareowners should be expected to give up inalienable rights through explicit or implicit contracts that strip them of voluntary independent action and thought. Just as those who wield political authority over citizens do so as their delegates – as their representatives – so should business leaders evolve into trustees representing shareowners and employees if we are ever to free ourselves from tyranny in the influential world of work and commerce. For further historical and philosophical examination of these issues, see On the Renting of Persons and Inalienable Rights: A Litmus Test for Liberal Theories of Justice by David Ellerman. Your thoughts? Comments are always welcome. Send via e-mail and I’ll post.