On January 14th I attended another great event at the Rock Center for Corporate Governance. It was a dialogue between Professor Dan Siciliano, Faculty Director of the Rock Center and Brad Stone, author of The Everything Store: Jeff Bezos and the Age of Amazon. There was plenty of opportunity for audience participation… many getting in two questions.

My wife and niece joined me. I made sure we arrived early because I thought this event would pack the house. While attendance was good, there was still plenty of room for more. Here are some of the ideas I walked away with. They may or may not reflect anything Stone or Siciliano said.

Stone discussed how visionary founder Jeff Bezos transformed Amazon from an online bookseller into one of the most successful companies in the world through its corporate culture, emphasis on the customer, focus on long-term success over short-term profits, and restless pursuit of new markets.

Was it luck of skill? Stone though Jeff Bezos would say a lot was luck but there was obviously a whole lot of skill involved. Self-effacement Distilling an initial idea to do something over the internet down to one idea, books, was the right move for the times and he continued to makes all the right moves. There were a few stumbles; the board almost asked him to step aside during the dot.com bust but Bezos appears to being on firm ground with the board for many years. He identified opportunities early. No companies from that era are as dynamic. Bezos is unwilling to settle for anything less than excellence.

Likable? Talking to him was a pleasure. He was completely focused and understands the writer/journalist. Amazon has a higher rate of employee churn. Its a hard place to work but Bezos is incredibly inspirational. (My take: unlike Apple, Amazon doesn’t contract out most of its lower-wage work to people in China.) Customer centered. Relentless… almost to the point of sociopathology? Amazon places its customers in the number #1 slot, not its employees or shareholders. Costco is more in service of its employees. There is no confusion who is #1 at Amazon.

Customers placed first might lead to rationalizations for behavior which others might find bad, like avoiding sales taxes. I think WalMart also uses this rationalization. Some saw paper-thin rationalizations about not paying taxes because they don’t have a presence in the state… especially when they had a subsidiary with another name. Rationalizations run deep. Answers start with Jeff and filter down.

Missionary or mercenary? Of course Bezos would say he is missionary but he is probably both.  2006 Gazelle project to work with small publishers. The nickname came from something Bezos said about pursuing these publishers as a cheetah might pursue a sickly gazelle. Apparently, the attorneys didn’t like that, so changed the name. Barnes and Noble can’t compete because prices are so low. If Amazon pulled recommendations from books and products, their rankings would fall at least 30%. They will pull every string to advantage themselves in the market.

Self-publishing. Amazon is building that movement by building lots of tools. Printing on demand. Disintermediate publishers. Amazon would say traditional publishers aren’t experimenting enough. Amazon is creating another moat for the Kindle.  Stone say he often reads a book on his Kindle and then listens to the next portion of the book using the audible version in his car. Publishers wouldn’t push that dual sales model. 2000-2008 was quite, consolidating and licking their wounds. They had a Netflix kind of business and were being trounced by them. When it became clear that streaming was the future, their small interest in LoveFilms became more important. LoveFilms needed Amazon permission to go public… Amazon leveraged this legality and bought them out.

Zappos. Started late 1990s and gave even better customer service. Barely survived dot.com bust but was threatening to go head to toe with Amazon in at least that segment of the business. Amazon started another company (Endless.com) to compete with Zappos. Endless gave discounts, coupons and used other methods to undercut Zappos. They basically had to sell to Amazon but the Zappos team negotiated for stock, kept a degree of autonomy and it and turned out to be a good move.

Drones? What’s next? Nothing but surprises… like when he bought the Washington Post. Stone thinks Bezos will continue to surprise. Set-top box, phone?  Google bought Nest.  Amazon will be among the top buyers. One of their maximums is to never have a human do anything a robot can do. They will look to automation as a solution.

Competitors? Customer focused not competitor focused (Apple and Google). Kindle users are taken to Bing, not Google, even though using Android system. On retail side, WalMart. Online buying a better way to shop. Enterprise side – IBM. Margin. Deliberately unprofitable or low profitability. Funneling resources into new categories. High margins attract competition. Of course, Amazon has to show a little bit of profitability to keep or restore investor confidence. Not clear they will ever flip the switch to squeeze greater profitability. 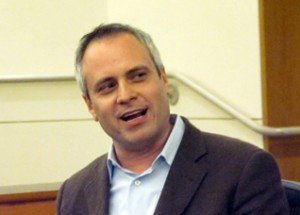 Foreign markets. Ozon.ru Russian counterpart. Needs to be able to deliver to people’s doors. Probably won’t go to Russia or others until payment processing and delivery is up and running. Somewhere they are probably evaluating Bitcoin. Overstock will now accept.

See also, The Secrets of Bezos: How Amazon Became the Everything Store, Bloomberg.

About the Speaker: Brad Stone is a senior writer for Bloomberg Businessweek and the author of The Everything Store: Jeff Bezos and the Age of Amazon. The book, published in October 2013, was selected as Business Book of the Year by The Financial Times and Goldman Sachs. Recognized for providing “the most compelling and enjoyable insight into modern business issues,” and as “a must-read for disrupters around the world,” The Everything Store was named The 2013 Financial Times and Goldman Sachs Business Book of the Year.

Costco (COST): How I Voted, Why I Proposed Simple Majority Standard – Proxy Score 25
Technology at the Top, the Changes Made in the Boardroom