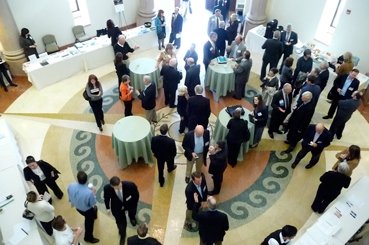 Below are notes I took during the afternoon sessions at the Corporate Directors Forum 2014, held on the beautiful campus of the University of San Diego, January 26-28, 2014. This year, I was only able to attend on January 27th. The program was subject to the Chatham House Rule, so there will be little in the way of attribution below but I hope to provide some sense of the discussion.

If you are a director or candidate, investor, senior corporate officer, board or management advisor, academic, or are in some way part of the corporate governance industrial complex or want to be, I hope to see you there January 25-27, 2015. If you attended the Forum this year and have ideas for articles you would like to see or to write for CorpGov.net, please email me your ideas or drafts. Part 1.

Small–Cap Shareholder Activism: Is Your Board Prepared for the Unique Challenges that Await?

60% of activist investing occurs in small–cap companies. But these companies have fewer resources and often less experience interacting with the “Street.” Dealing with activist investors is more vexing for many small–cap boards. 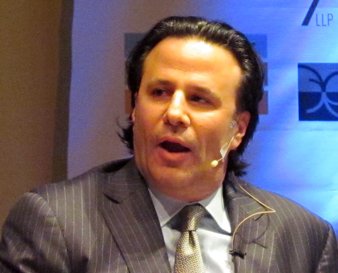 Harvard Law axioms aren’t necessarily applicable. Analyzing corporate changes sought by analysts.  Small-caps have lots of directors that don’t have experience. Every director often sits on every committee. Hire lawyers?  Tough if they don’t have the money to do so.  If 80% of your shareholders are retail, focusing on large institutional shareholders may not pay.

How to avoid activism. Transactional activism by selling stock and moving on. Not long-term investor. Need to listen to but if coming with a proxy fight to do its bidding, reasonable debate re what they know about inside corporation. Activist doesn’t have fiduciary duty to all shareholders. If making the effort, they may be onto something, so listen.

If activist is long-term shareholder they are more legitimately aligned with director’s fiduciary duty. 3-5 year perspective. Trading agenda or ownership agenda? If creating shareholder value and deploying capital efficiently, it will be hard to come in. 1/3 of small-cap companies don’t have an analyst covering them.

Most helpful to get advice from outside counsel that has experience – a track record. Short-term fix? Comp issue/ CEO not performing? CFO generality first point of contact.  Going public is a last resort. On different issues good to have directors with that expertise talk to them. Risk of group think higher in small more homogenous boards. Too easy for CEOs to stage manage boards of small companies.

Independent thinkers but all selected by CEO. Tough industry to understand and the CEO understands better than board members. Most manipulative CEOs bring skills to bear on directors. Directors often don’t have enough information. They got there based on a personal relationship with CEO. Reality is that corporate governance ’30 years ago’ is still here today at many small and micro-cap companies.

Red Mountain Capital usually owns 10% of company when they approach. They have lots of public company experience. Always has a white paper to improve company. Building block is board. Good first step is one of us on board. Influence value enhancement at the same time refreshing the board. Emphasis is not on who should move off the board but who should move on. We are governance junkies.

Too few directors have capital market experience. They have a pattern of going public on growth in one small area. Too often, they are then convinced to go to the secondary market for poor acquisitions based on push from banker. B Insular boards. New blood on board is often needed. How did you find? “People we know from the community or serve with on other boards.” Have you set up performance measuring rods? Communicate with shareholders. If disagree with their plan, offer up yours.

If approached by an activist, put a confidentiality agreement on table. If they won’t accept, then they are probably not a long-term investor but are a trader. This is a way to flush out intentions.  Have they accumulated full position? Are they going to be upfront? Standstill provision? How long restricted for? Scope of information expected? Used fairly often. Communications in confidence can allow you to talk more freely.

All directors should be willing to ask themselves if there is a situation in which they would fire the CEO.  Where is the balance of power? Healthy level of tension.

Clearly going to be abuses but where companies are doing all the right things there will be no engagement. It would be great to have everyone vote and be conscientious analysts. A lot of activism right now.

Will the company go through a period of underperformance? Capital is flowing to activist because they are getting excess returns. Activism is popular now. They are finding companies under-valued and where you can come in and make a difference. Seeing more sophisticated people going in.  There is a lot of focus on under utilized balance sheets.

Willing to sell the company? Getting smaller and divesting non-core assets can sometimes help to get back to operating synergy.  Activist helpful where CEO wanted to be big or became stale. Some CEOs can’t reboot. Capital allocation decisions.

Exception to liquidate is not the rule. Often company is not thinking about their pile of cash. Pick smart people who will be independent. Procedurally it is much easier for activists to go for a minority slate. Does target have a staggered board or are they elected annually? Are there people in the board you can work with? Don’t settle for board seats if no dialogue on where to go? Get one person on and use board process to refresh. Stunned by number of qualified candidates. Lots of folks available with experience with large companies. 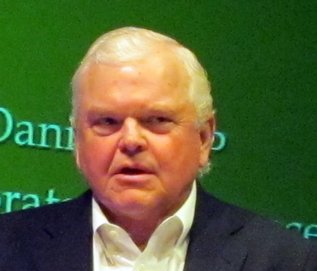 Fees paid to dissident directors. Experience? Issues? Hot button complex issue. Important to find the best and brightest. Family gets attacked, can be difficult process, so to give modest compensation package to buy stock is consistent with promoting long-term value.  They are going into a contentious situation. It is hard work. Rasonable if given capital and must hold for some time period. Once on board can’t have duty to company that put you on the board though. Got to avoid being a constituent director.

I was so happy the Forum included this session. Most boards are at small and even micro-cap companies and they usually get far too little attention at these types of events.

Can Activists Know Better Than Management? 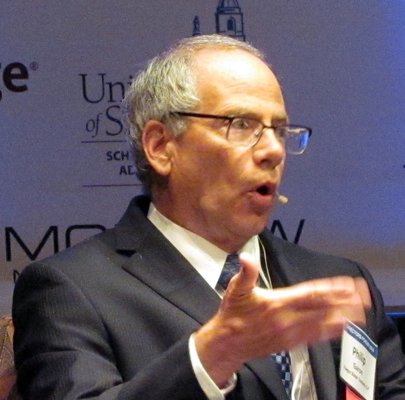 Can investors know more than the board and management about what is best for the company? Examples: JC Penney and the Timken Company. When do they succeed and why do they fail?

The public companies has been cut by half in 15 years. Fortune 500 companies have a 15 yr life expectancy. Returns are actually down in last 20 years. Worse than bad old manger dominated years.

Timken family couldn’t see conglomerate discount. CalSTRS doesn’t want breakup for quick pop. They are going to own both companies after the split. Activism isn’t the primary force driving the economy. Economic inequality driving more. Answer isn’t to strip shareholders of their power. Look at campaigns. If a bad idea for a company, vote against. Some activists are in it for the long-term. Most are in for a quick transformational event.

Early 1990’s as watershed with amendment of tax code to exclude tax deduction for pay not linked to performance measure and increased ability of shareholders to talk more freely with each other. Role for activists? Skeptical. There are few cases where activists have been successful in running companies. Good at finding companies where you can get good return. They too often fix the used cars and resell without adding real value. 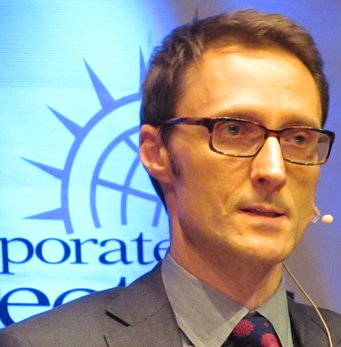 ‘Now I know what it is like to be on Fox News.’ JC Penny may have been dumb but not short-term. Companies can easily get in trouble without the help of activists. There are vlue traps. Most activist are trying to find undervalued companies where they can be the mechanism to extract that value.

Borders: Ackman comes in and in a few years is chair of board. ‘We’ve done great.’ What they haven’t done is put money into R&D. Didn’t put money in; just took money out. Rearranging the chairs (on the Titanic).

Timken: 53% of the vote went for spinoff. Board stated the two companies had deep synergies. Four months later, after the vote, the board approved spinoffs. What happened? ISS policy kicked it because of their new policy to vote against board that went against a majority vote. Standard & Poors reduced their rating of Timken right after the board took action because of reduced synergies and higher expenses. Timken was the first shareholder proposal of its kind that went to a vote.  Great for taking out weak members of the herd. 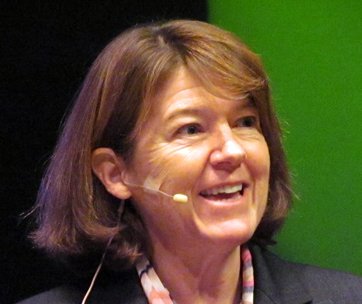 There is among boards a knee jerk reaction against putting activists on boards. Risks are if they do have an agenda even one or two can disrupt the board. Target: idea was separate ownership of stores and REIT property. Sometimes share repurchases and dividends make sense. Sometimes a bad idea.

Compensation drives behavior. Generally, basis is a maximum of 3 years. What are shareholders to do?  Step out and think more like public.  More companies that are going public are using dual class shares.  Decisions are being made by the companies. The corporate sector is evolving. You can identify. For every high profile campaign their are nine others with a low or profile. How do you know what they did? Some happier with long-term shareowners figuring out which companies should be culled from the herd, instead of activists. They get to vote.

Synergy. How do you measure?  Some companies have components that trade at different multiples (Timken).  Might be hard to quantify but you can usually tell if synergy is minimal. Talking about total market returns. Hedge funds control 10% ISS controls 20-30% through their advice. (lazy mutual funds don’t do their own analysis)   Activists are earning more because they are fishing with dynamite.  77% institutional investor base decides who will be successful.  If an activist is waging a campaign that an opportunity for open discussion. While that might be true at large-cap, less so at small- and mid-cap where discussion proportionately because costly.

Corporate profit margins are growing. Timken transferred wealth. Instructive, dynamic. Are we going to reach a low point? We are watching the death of the public company that isn’t based on a dual class structure. Private companies treat their employees better. Wealth generation going to private companies. 50% of people think corporations are good. There are too many costs in being public.  For companies in the $1/2 – 1 billion it may not be worth it. JOBs Act will reinforce private wealth and wealth disparity.

The sparks flew over a lot of issues. Both/all sides had good points and provided food for thought. 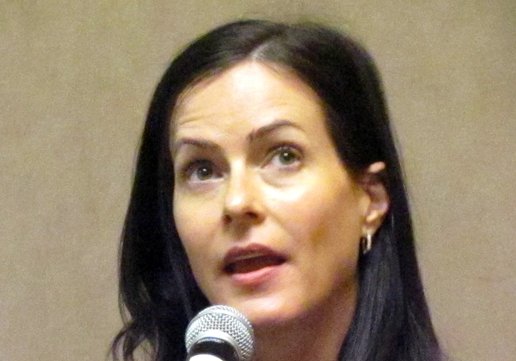 Bethany McLean, author; contributing editor, Vanity Fair; contributor, CNBC; columnist, Reuters. She was great. What I liked the most were her several quotes from classics of English Literature. Interesting mix, majored in math and English. The Forum was under Chatham House Rule so I’ll just post a November 15, 2013 talk she gave as part of the Dean’s Speaker Series at Loyola University Chicago Quinlan School of Business. Author Bethany McLean, the reporter who broke the Enron scandal, speaks on the shady business practices of some major corporations.