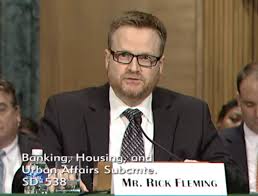 The Dodd-Frank act created a new permanent Investor Advisory Committee (SEC-IAC) to consult with and advise the SEC on matters, such as making recommendations to Congress for legislative changes on the regulation of securities products, trading strategies and fee structures, the effectiveness of disclosures, and other investor protection initiatives. The IAC is comprised of the head of a newly created Office of the Investor Advocate, a representative of senior citizens, a representative of state securities commissions, and 10 to 20 representatives of individual and institutional investors appointed by the SEC. Almost two years after establishing the new SEC-IAC, Rick A. Fleming has been named as the first head of the agency’s Office of the Investor Advocate (OIA).

Responsibilities of the Office of the Investor Advocate

The Office of the Investor Advocate (OIA) is within the SEC but with independent reporting obligations to Congress. The head of the OIA, appointed by the SEC Chairman, is charged with:

According to the SEC’s press release, Mr. Fleming is currently deputy general counsel with the North American Securities Administrators Association (NASAA) and will assume his new role on Feb. 24, 2014. Said Mary Jo White, Chair of the SEC:

I am very pleased that Rick will be joining the Commission as its inaugural director of our Office of the Investor Advocate. Rick brings a depth of experience advocating for the interests of investors, a keen understanding of the markets, and a true passion for investor protection.

Fleming has been NASAA’s deputy general counsel since October 2011, where he advocated for investors and represented the organization of state securities regulators before Congress and federal agencies, including the SEC.  Previously, he spent more than 20 years in state government in Kansas working in the Office of the Secretary of State, the Office of the Governor, and the Office of the Securities Commissioner. Said Mr. Fleming:

It is a great honor to be appointed as the first Investor Advocate at the Commission, where I will work alongside the many talented professionals at the SEC who have dedicated their careers to the protection of investors.  I look forward to helping ensure that investors are always heard and treated fairly…

This is right up my alley. Investor protection has been in my DNA for a very long time.

According to Reuters, in his current position, he has been deeply involved in helping to push the SEC and Congress to draft regulations and laws with a more investor-friendly focus.

The group of state securities regulators has been vocal, for instance, in calling for stronger investor protections in rules that stemmed from the Jumpstart Our Business Startups (JOBS) Act.

That 2012 law loosens securities rules to help small businesses raise capital. But critics including NASAA have said it may open the door to more fraud.

According to his Linkedin profile, Fleming is active in developing model state rules, drafting and reviewing comment letters and amicus briefs, and providing assistance to state securities regulators.

Fleming worked from 1996 until 2011 in the Office of the Securities Commissioner in Kansas, first as associate general counsel and later as general counsel, where he represented the state in disciplinary proceedings against broker-dealers and investment advisers, prosecuted civil and criminal securities-fraud cases, reviewed public securities offerings, drafted legislation, and testified before the state legislature on securities and investor-protection matters.

I look forward to learning more about Rick Fleming as he digs into all that work at the SEC. He will be working closely with the SEC-IAC, a great team. Congratulations! Anyone have information or ideas on his probable agenda or where he should focus? Please share your thoughts.