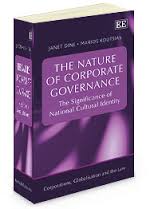 The Preface to this book is so powerful that I have to begin my review with the words of the authors, Janet Dine and Marios Koutsias.

Modern discourse uses different words to express a concept of God. We use terms like human rights, corporate social responsibility, ethical principles, communitaire, sustainability, democracy, public interest or bona fide. On the other side there are terms like efficiency, growth, development and necessity.

Democracy isn’t just about voting, it is also about trying to balance the powerless and the powerful but neo-liberalism always gives the advantage to the powerful because of its enherent dislike of regulations. More than any book I’ve read since the start of the Great Recession, this book attempts to examine the foundational theories of corporate governance (agency, nexus of contracts, stakeholder and concession theories) in the national historic and idealogical context mostly of the USA, UK and Germany.

Everywhere I turn in the corporate governance industrial complex the emphasis is on huge funds and how they need to take a long-term approach to counter the greed of individual shareholders, managers and the croneyism of directors. Some place their faith in “universal owners,” but public pension funds based on defined contributions are shrinking relative to the whole and mutual funds have little incentive to spend much on monitoring, since their competitors share in the gains but not the expenses. (see Agency Capitalism: Corrective Measures (Parts 1, 2 and 3)

It is refreshing to see the authors here acknowledging “‘willing capture’ by companies of the ‘market state’ giving significant autonomous power to corporations” and that “a new economic system which decreases the reach of corporate power and its elites can only be achieved by popular pressure.” That popular pressure could be boiling under the surface because of the quickly disappearing middle class and growing inequality.

The authors argue that democracy can coexist with income inequality but not with political inequality. With the Citizens United consensus politics has thinned to the point of breaking with those with access to the state extract more concessions whole failing to even acknowledge a social contract. The intellectual journey of The Nature of Corporate Governance begins with a discussion of the reasons for convergence and divergence, even if the very definition of corporate governance.

Who should control the corporation, in pursuit of what goals and in whose interests? While there has been some convergence on something of an Anglo-American model because a framework is needed due to increase economic dependence, after pages of discussion about the very nature of corporate governance we can plainly see

its parameters and foundations are deeply rooted in the individual history and the traditions of a society, rendering the corporate governance model distinctively national in its approach and nature.

Ownership is not absolute; it carries nut just rights but responsibilities:

We in America have been struggling with the problem of the separation of ownership from control and the limited liability granted to owners. To end the financial crisis, society bailed out financial institutions but has little no ongoing role in controlling risk.

In the USA, fiduciary duty is primarily to the corporation and shareholders. In the EU, the duty is to the corporation and other stakeholders. In the UK the duty is only to the company. The author’s see the UK’s corporate governance code as ‘wishful thinking’ rather than an imperative. “If legislation is not put in place to introduce mandatory voting of shareholders and employees on the remuneration committee on the executive pay, inequality will be unstoppable.”

In the end the German concession model based on incorporation seen as a privilege granted by society that carries obligations to society (to serve the public good), rather than a right, begins to look pretty good but it may not have traction internationally. Dine and Koutsias call for a flatter consensus model that would allow other stakeholders more power.