Gallagher opened his attack by stating,

Activist investors and corporate gadflies have used these loose rules to hijack the shareholder proposal system. 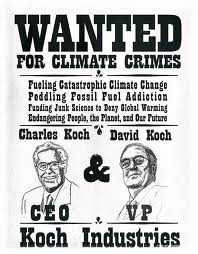 Using statistics from the conservative Manhattan Institute‘s Proxy Monitor (funded in part by the Koch Family Foundations), covering only the top 214 out of thousands of American companies, Gallagher went on to note that in 2013 41% of shareowner proposals addressed social and environmental issues, including political contributions but that only 7% received majority support.

These proposals are not coming from ordinary shareholders concerned with promoting shareholder value for all investors.  Rather, they are predominantly from organized labor, including union pension funds, which brought approximately 34% of last year’s shareholder proposals, as well as social or policy investors and religious institutions, which accounted for about 25% of 2013’s proposals.  Approximately 40% were brought by an array of corporate gadflies, with a staggering 24% of those proposals brought by just two individuals… only 1% of proposals are brought by ordinary institutional investors—including hedge funds.

So in Gallagher’s mind, hedge funds represent the “ordinary” investors, while pension funds, religious communities and retail shareowners like John Chevedden and myself represent special interests.  He says, “the Commission has never adequately assessed the costs and benefits of this process.” Given other options available, like simply selling shares, voting out directors and going to court, Gallagher is “not sure we need shareholder proposals at all.”

Let’s pause for a moment of reflection. Commissioner Gallagher is concerned that special interest investors like pensioners, religious people and retail shareholders have hijacked the proxy proposal process by filing resolutions such as those pushing for disclosure of political contributions.

In his Citizens United dissent, Justice Stevens argued the law should protect shareholders from funding speech they oppose. The majority, however, argued that ownership of corporate stock was voluntary. Unhappy shareholders could simply sell off their shares if they did not agree with the corporation’s speech. However, both sides on the Supreme Court assumed shareowners know how our corporations are spending our money. Wrote Justice Anthony Kennedy for the Court,

With the advent of the Internet, prompt disclosure of expenditures can provide shareholders and citizens with the information needed to hold corporations and elected officials accountable for their positions and supporters.

Yet Kennedy was wrong. There were no disclosure rules in place for this sort of spending. (see Political Corporate Contributions Won’t Be Aired in Daylight) That’s why these resolutions are important and why a record 600,000 people have requested the SEC to require such disclosures. Now Gallagher wants to even stop ‘private ordering,’ where shareowners have to file proxy proposals at each company where they own stock. Owners should be able to find out how their agents are spending their money.

As for the Commissioner’s favored remedies, selling your shares is like moving because you want a stop sign at the end of the block. Most investors that file proposals want to remain invested in the companies where they file proposals but they also want some changes. Rather than moving, I’ll petition city council to get a stop sign; rather than selling I’ll file a proposal to declassify the board.

Voting out directors is literally impossible at most corporations because shareowners have a North Korean style choice — vote for the candidate on the ballot or don’t vote, since they generally have no opponents. Most companies still have plurality voting, so if an unopposed director gets one vote they will remain in office. Going to court to enforce our rights? Going to court is expensive and is mainly used by attorneys to extort companies (Takeover Litigation in 2013) and more recently by companies to intimidate retail shareowners who file proxy proposals.

If we must have shareholder proposals, the SEC’s rules can and should do a better job ensuring that activist investors don’t crowd out everyday and long-term investors—and that their causes aren’t inconsistent with the promotion of shareholder value.

He then goes on to outline a program of reform that would essentially gut the proxy proposal rules affirmed by recommending the following requirements for shareowner proposals:

Two million or some percent of ownership to file a proposal? That would leave corporate governance to the largest institutional investors like BlackRock and to the 1%. As I have explained elsewhere, large institutional shareowners don’t file proxy proposals, so that would leave hedge funds and the likes of Carl Icahn.

With regard to holding periods. According to Gallagher, whatever the term is, it should deter “activists” from filing. If activists don’t file, who will? If a shareholder filed, would that make them an “activist” and, therefore, ineligible to file?

‘Proposal by proxy’ is a derogatory term made up by attorneys suing one activist, John Chevedden. Just like companies  sometimes use expert services, such as outside counsel, to help them with ‘no-action’ requests to the SEC or in filing litigation, shareowners like me sometimes ask Chevedden for help in filing our proposals. Who better to help than the person who files the most proposals? This issue is a red herring.

Sending any proposal claiming to involve a ‘significant policy issue’ to the full Commission for decisions will drown the Commission in an endless procession of paperwork and debate, taking them away from more important work, like setting policies to protect the investing public.

Regarding false, misleading or vague statements, Gallagher’s notion that we should reverse the burden of proof is ridiculous. Investors are required to file proposals months in advance of when companies write their proxy statements. During that time the world goes on and facts change. You can’t prove something will be true several months in the future. Investors have 500 words to both make their arguments and for the text of their proposals. The company is under no word limit for their rebuttal. If they can’t make their case, the proposal should pass, despite inaccuracies.

Upping the required threshold for resubmissions would stultify debate. Issues like poison pills, declassified boards and majority voting for directors have taken years of arguments to sway shareowners. Just like science doesn’t move to a new paradigm until a more promising one becomes compelling, it often take years to change opinions on corporate governance or social issues impacting businesses.

SEC v. Transamerica Corp. (3d Cir. 1947) was the first and only case in which the SEC brought suit to compel an issuer to include a shareholder proposal. As Jill E. Fisch notes in The Transamerica Case.

The Transamerica decision represented the high point in SEC protection of shareholder voting. Rule X-14A-7 afforded shareholders the broadest power with respect to the introduction of shareholder proposals; it imposed no qualification requirements, limits on the number of proposals allowed or subject matter limits.

Since 1947 the legal rights of shareowners have been eroding. Now, Commissioner Daniel Gallagher wants those dealing with proxy proposals to virtually disappear. Nell Minow argues that Corporate First Amendment rights belong to the shareholders.

Gallagher’s recommendations would do nothing to protect investors or promote fair markets and capital formation. Instead, he would essentially sanction the complete turnover of the shareowner’s proxy to managers to facilitate their own entrenchment, with the possible exception that some rights to submit proxy proposals might still be maintained by hedge funds, the only shareowners recognized in Gallagher’s speech as representing the rights of “ordinary” investors.

The legal rights of shareowners to oversee corporate governance have been eroding since 1947. I, for one, am not about to roll over and watch a substantial body of our remaining rights disappear.

For coverage by others, see SEC Should Limit Gadflies’ Clout in Proxy Votes, Gallagher Says and SEC Commissioner Says Enough With the Activism.