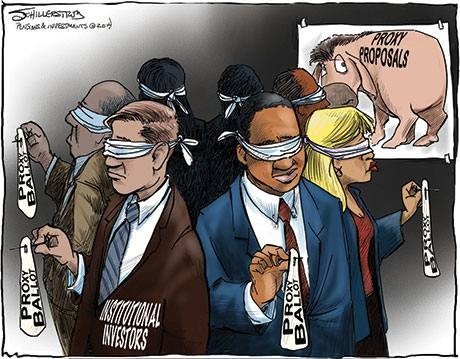 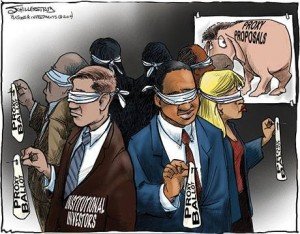 This is the first of a three part series. See also Fiduciary Duty to Announce Votes (Part 2): Historical Background and Fiduciary Duty to Announce Votes (Part 3): Take Action.
A recent editorial in Pensions & Investments (P&I), Winning over proxy voters, essentially argues that pensions have a fiduciary duty to announce their proxy votes in advance of the annual general meeting (AGM) if doing so is likely to influence the vote. This minor extension of current practice could have a profound impact and should also apply it to mutual funds and investment advisors, as well as other institutional investors, such as endowments.
The editorial discusses Warren Buffett’s recent reluctance to vote against the pay package at Coca-Cola.

Mr. Buffett’s revelation he abstained in voting while criticizing the equity plan was deliberately timed to avoid influencing shareholders. In defending his abstention, Mr. Buffett said he didn’t want to “go to war” with Coca-Cola. He does a disservice to the pension funds and other shareholders voting against the plan. Pension funds have considerable assets invested in the company and seek to improve its performance, not make war. For their part, Berkshire Hathaway shareholders should ask if Mr. Buffett skirted his fiduciary duty to them by not voting against the plan because he considered it excessive.

Although Buffett was criticized by many, the editorial asks institutional investors to look in the mirror:

Many observers criticized Mr. Buffett for not declaring his unhappiness with the proposed compensation plan before the vote because they felt his disapproval might have changed many “yes” votes or abstentions to “no” votes. The same reasoning could apply to the votes of the large, highly respected institutional investors, such as public pension funds.

The editorial then calls on institutional investors to act:

When pension funds vote, they should, under their fiduciary duty, want their views to prevail. It is hard to see how they can do so if they keep their voting intentions confidential. They should do whatever they can within Securities and Exchange Commission allowances to persuade other shareholders.

The Council of Institutional Investors, whose mission is to improve corporate governance in order to improve shareholder value, should consider developing a project to move toward greater disclosure. In addition, proxy advisory firms could facilitate more disclosure through the use existing platforms that display proxy votes by funds.

Money managers also should post their voting intentions in advance, and not just in the annual post-meeting reports required by the SEC. Some money managers do so now; they tend to be firms involved in socially responsible investing. Some big managers leak out their voting once in awhile. But for the most part they prefer to wait until the required reporting, which could be in part so as not to offend existing or potential investment management clients.

P&I acknowledges that pension funds have fiduciary duties with respect to proxy voting:

The Department of Labor, which oversees the Employee Retirement Income Security Act, has declared proxy votes to be plan assets. Pension funds and their managers have a fiduciary duty to vote their proxies in a way that enhances shareholder voles for the sole purpose of improving the economic interest of participants and beneficiaries.

The editorial also recognizes that some money managers do announce their votes in advance; “they tend to be firms involved in socially responsible investing.” However, we are a little further along than the casual reader of the editorial might infer, both with respect to the legal foundation of announcing votes in advance and the infrastructure for doing so. More in Part 2 tomorrow.