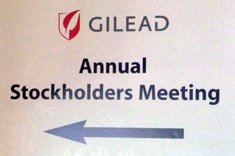 Gilead Sciences $GILD is one of the stocks in my portfolio. Their annual meeting is coming up on 5/7/2014. ProxyDemocracy.org had collected the votes of two funds when I checked and voted on 4/28/2014.  I voted with management 43% of the time.  View GILD’s Proxy Statement, which has a linked Table of Contents.

GILD’s Summary Compensation Table shows CEO/chair John C. Martin was the highest paid named executive officer (NEO) at about $15.5M in 2013. I’m using Yahoo! Finance to determine market cap ($113.4B) and Wikipedia’s rule of thumb regarding classification. GILD is a large-cap company. According to Equilar (page 6), the median CEO compensation at large-cap corporations was $9.7 million in 2012, so GILD is over median. Additionally, according to GMI:

We note that CEO and Chairman John Martin continues to receive considerable annual equity grants of time-vesting stock options—a mega grant of 662,000 options during the company’s last reporting period. Over the years, the CEO has received copious options awards, well over five million since 2000. While executives do receive performance share awards based on revenue and TSR results, the awards pay out for sub-median performance. Consider this too: Gilead insiders sold less than 1.5 million shares in 2011 for about $59 million, then sold over 3.4 million shares for about $208 million in 2012, and over 6.5 million shares for nearly $395 million in 2013. CEO Martin’s realizable pay was over $83 million in 2013, as he took substantial equity gains off the table. Not only does this  require the company to make fresh grants to maintain the incentive value of awards, but it also raises the question: is there something insiders know that we don’t know?

Therefore, I voted against the pay plan and members of the Compensation Committee: John W. Madigan, Chairman, Kevin E. Lofton, Nicholas G. Moore, and Per Wold-Olsen.

The GMIAnalyst report I reviewed gave GILD an overall grade of ‘C.’ I’m not sure why CBIS and Trillium are voting not to ratify the auditor, Deloitte & Touche LLP. I did see that according to GMIAnalyst,

Gilead Sciences, Inc. is currently rated as having Aggressive Accounting & Governance Risk (AGR). This places them in the 11th percentile among all companies in North America, indicating higher accounting and governance risk than 89% of companies.

Therefore, I went ahead and voted with the mutual funds against ratifying GILD’s auditor. I voted against the Board’s proposal to mandate Delaware as the exclusive forum. Like Glass Lewis, I believe that such exclusive forum bylaws are generally not in shareholders’ interests since they unnecessarily limit full legal recourse by preventing shareholders from bringing suit in a forum of their choosing. CII has a similar policy:

1.9   Judicial Forum:  Companies should not attempt to restrict the venue for shareowner claims by adopting charter or bylaw provisions that seek to establish an exclusive forum.

With regard to shareowner proposals, of course I voted in favor of my own proposal to move to an independent chair. I agree with the Council of Institutional Investors and the Millstein Center for Corporate Governance, “The time has come for independent chairmanship to become the default model of board leadership in corporate North America.”

Evolution of the role of the board has created an array of significant duties, difficult to reconcile with the full-time required to manage the demands of a large company. According to a survey by the National Association of Corporate Directors, 72.8% of directors serving on boards with an independent chair opined that companies greatly benefit, while 6.7% stated they did not. According to the latest Spencer Stewart survey of board members, 64% agree or strongly agree that splitting the positions results in more independent thought by directors, while 60% affirm that it leads to more effective CEO evaluations.

For me, splitting the CEO and chair positions is just good governance. GILD seems to be operating a little too much in the past. I don’t want to be agist. I’m 65 and don’t want to be ageist, but sometimes you can have too much of a good thing. Only two of the board candidates are younger than me, and not by much. The average age of directors on S&P 500 Boards is 63. The average age of the GILD board is 69.

I also voted in favor of John Chevedden’s proposal to allow shareowners the right to act by written consent. This makes sense, especially if there is an emergency.

Looking at SharkRepellent.net, no action can be taken without a meeting by written consent and Special meetings can only be called by shareholders holding not less than 25% of the voting power.

One Response to Gilead Sciences (GILD): How I Voted – Proxy Score 43