CalPERS today announced that the System’s shareowner proposal at Nabors Industries $NBR recommending that the company change its proxy voting methodologies passed with the support of a majority of shares voted. CalPERS sought the changes to ensure equality and fairness in the manner in which Nabors counts votes cast on proxy proposals at its annual shareowner meeting. 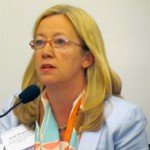 This is a tremendous win for CalPERS and all shareowners [and] sends a clear signal to Nabors, and other companies with similar provisions, that it’s time to end what some view as vote rigging.

The issue was brought to light after last year’s annual meeting when a separate CalPERS shareowner proposal on compensation was not successful. Analysis of the results found that the company was using broker ‘non-votes’ in their counting methodologies. In contrast to ‘for,’ ‘against,’ and ‘abstain’ votes, which are an affirmative action by a shareowner, the act of counting non-votes allows the company to interpret those who do not respond to the proxy with an affirmative statement as being equal to an ‘against’ vote.

I wrote about this back in 2010 when Newground Social Investments made history at Plum Creek. Most companies have long since counted their votes correctly and consistent with how the SEC counts them with regard to investors qualified to resubmit proposals.

As a significant long-term shareowner, CalPERS believes that only ‘for,’ ‘against,’ and ‘abstain’ votes should be counted to determine the outcome of proxy proposals. CalPERS commissioned a research report on this issue which found that Nabors is one of only 36 companies in the Russell 1000 with similar voting provisions. Hopefully, vote rigging of this nature will come to an end.

However, as the press release from CalPERS notes,

while the outcome indicates majority support for CalPERS, the proposal is non-binding and the practice of counting non-votes is allowed by the company by laws. CalPERS will still seek to amend the bylaws to prohibit the practice.

CII Meets With SEC
Why do Target Shareholders Buy into Mergers and Acquisitions?