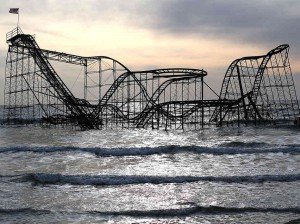 The American economy could face significant and widespread disruptions from climate change unless U.S. businesses and policymakers take immediate action to reduce climate risk, according to a new report, “Risky Business: The Economic Risks of Climate Change in the United States.” Check out their blog too.

The U.S. economy faces significant risks from unmitigated climate change. The Risky Business report presents a new approach to understanding these risks for key U.S. business sectors, and provides business leaders with a framework for measuring and mitigating their own exposure to climate risk. Join Henry M. Paulson, Jr., Michael R. Bloomberg, Thomas P. Steyer, and the members of the Risk Committee for the report release on Tuesday June 24th in New York City.

The Risky Business research focused on the clearest and most economically significant of these risks: Damage to coastal property and infrastructure from rising sea levels and increased storm surge, climate-driven changes in agricultural production and energy demand, and the impact of higher temperatures on labor productivity and public health.

We’ve all heard about the long-term threats of global catastrophe; but the near-term problems don’t look so good either.

Coastal property and infrastructure. Within the next 15 years, higher sea levels combined with storm surge will likely increase the average annual cost of coastal storms along the Eastern Seaboard and the Gulf of Mexico by $2 billion to $3.5 billion. Adding in potential changes in hurricane activity, the likely increase in average annual losses grows to up to $7.3 billion, bringing the total annual price tag for hurricanes and other coastal storms to $35 billion.

Agriculture. A defining characteristic of agriculture in the U.S. is its ability to adapt. But the adaptation challenge going forward for certain farmers in specific counties in the Midwest and South will be significant. Without adaptation, some Midwestern and Southern counties could see a decline in yields of more than 10% over the next 5 to 25 years should they continue to sow corn, wheat, soy and cotton, with a 1-in-20 chance of yield losses of these crops of more than 20%.

Energy. Greenhouse gas-driven changes in temperature will likely necessitate the construction of up to 95 gigawatts of new power generation capacity over the next 5 to 25 years—the equivalent of roughly 200 average coal or natural gas-fired power plants—costing residential and commercial ratepayers up to $12 billion per year…

Investments must be evaluated in terms of the actual climate risk specific regions face as we approach the middle of this century. In 2010, recognizing this reality, the Securities and Exchange Commission (SEC) issued Interpretive Guidance on climate disclosure, giving companies some idea of how to consider their “material” risks from climate change; unfortunately, as of 2013, over 40% of companies listed on the Standard & Poor’s 500 Index were still not voluntarily disclosing climate risks.

Improving Board Dynamics: Case Study in MBTI® Assessment
Use and Misuse of Stock Price