I’ve previously written two posts on California’s Savings Plus program and how one major contractor, Northern Trust has voted. (Part I & Part II) Below, I compare the votes of Northern Trust on proxy proposals with those recommended by the AFL-CIO. A similar exercise could be performed at any deferred compensation plan.

Shareholders have voting rights, usually one vote per share, to decide who will serve on the board and to advise on pay and other issues. Funds, such as CalPERS and the CalHR Savings Plus program, have a legal duty to ensure shares are voted in the best interest of program participants.

Are unreported political contributions or poor labor and environmental practices in the best interest of Savings Plus participants? No!

CalPERS has extensive information on its website concerning how proxies are voted. Members are encouraged to vote along with CalPERS if they hold stock as individuals. The Savings Plus site has nothing. Northern Trust is the current contractor for S&P 500 and other indexed funds offered through Savings Plus. Why? Maybe the difference is due to the fact that members help elect the CalPERS Board, whereas Savings Plus is essentially contracted out.  Additionally, $300 billion gets more attention than $10 billion.

Additionally, if you do an Internet search on “Northern Trust proxy voting policies” you can find their proxy voting records. Like most funds, Northern Trust uses a voting platform developed by Institutional Shareholder Services (ISS), designed to meet and exceed required SEC disclosure requirements. 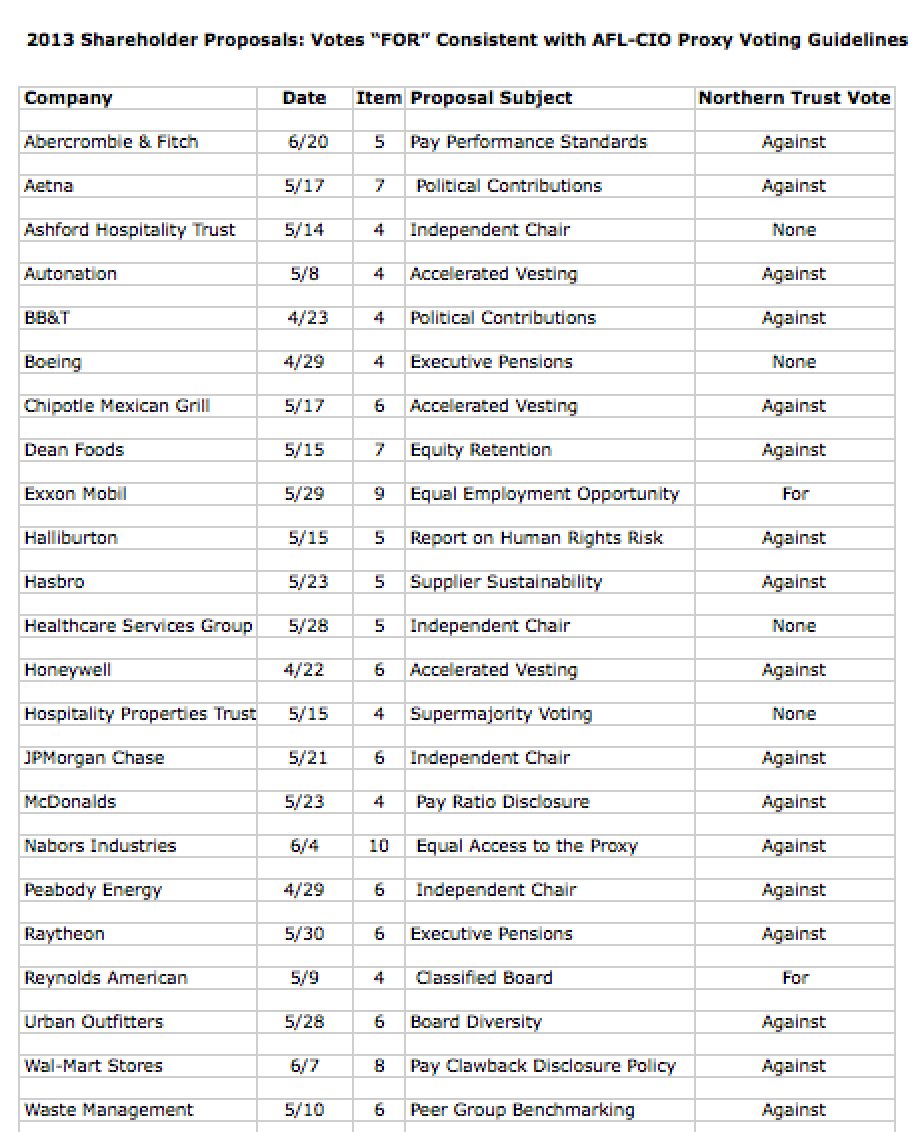 Each year the AFL-CIO puts out a Key Votes Survey. In the table to your right I have included all the shareholder proposals included in the 2013 Key Votes Survey and have indicated how Norther Trust voted.

At Abercrombie & Fitch in 2012 only 25% of shares were voted in favor of the executive pay plan. The IBEW submitted this proposal to require the next pay plan use “quantifiable performance metrics.” We paid the CEO more than $2 million. He has a company pension worth $14 million. Shouldn’t his performance bonus be based on something measurable? Not according to Northern Trust.

At Aetna, the Unitarians proposed the Aetna board establish a policy to govern political contributions and to publicly disclose such contributions. Northern Trust apparently is fine in leaving it up to management and keeping shareholders in the dark.

Yet, corporations are not required to make the disclosures to shareowners as Justice Kennedy seems to have believed. How can we, as shareowners, hold corporate managers accountable when we do not know what candidates or measures they are supporting? Northern Trust voted against a similar proposal at BB&T.

At Autonation, Chipotle, and Honeywell shareholders asked that equity awards that are supposed to stretch out into the future and provide performance incentives to executives not be accelerated with a change of control of the company. Why pay for performance that isn’t earned? Apple, Chevron, Dell, ExxonMobil, IBM, Intel, and Microsoft to name a few have changed their policies. Northern Trust voted against this proposal at each company.

At Dean Foods, IBEW asked the Board to adopt a policy requiring that senior executives retain a significant percentage of shares acquired through equity compensation programs until reaching normal retirement age or terminating. This would incentivize them to work for the long-term good of shareholders. Why would Northern Trust, using funds from California employees, vote against such a measure?

At Exxon Mobil, Northern Trust finally got one right. They voted in favor of ending harassment and discrimination on the basis of sexual orientation.

At JPMorgan Chase and Peabody Energy, shareowners wanted to split the positions of CEO and board chair? How can the CEO be his own boss? Northern Trust thought he could.

Shareowners at McDonalds wanted a report of the pay ratio between the CEO and lowest paid worker. $10 million a year versus less than $10 an hour. It could have been embarrassing. Northern Trust voted against it.

At Nabors Industries, New York City employees wanted shareowners to have the right to place a candidate on the corporate proxy, instead of just having the opportunity to vote for the company’s candidates. The measure passed with 51% of the vote but the Nabors board failed to implement it. A positive vote from Northern Trust would have made that less likely.

At Raytheon, shareowners wanted a vote on any future extraordinary retirement benefits for senior executives. The CEO was already guaranteed $5 million. Northern Trust voted against.

At Reynolds American, shareowners wanted to vote on all directors every year, instead of every three years. Shareowners have that right at 90% of the S&P 500 but Northern Trust thought it was a bad idea.

Urban Outfitters’ shareowners wanted the board to “take every reasonable step to ensure that women and minority candidates are in the pool from which Board nominees are chosen.” Northern Trust voted to keep the process as is.

At Wal-Mart, shareowners wanted a polity and report on recoupment or forfeiture of pay due to “conduct inimical to the interests of or detrimental to Walmart.” Again, Northern Trust said no.

Finally, Northern Trust also voted against a shareowner proposal at Waste Management asking the board of directors to adopt a policy that “if the Committee uses peer group benchmarking to establish target awards for senior executive compensation, the benchmark should not exceed the 50th percentile of the Company’s peers.”

Many State employees are engaged in ensuring fair elections workplace safety, human rights, fair employment, worker rights, environmental protection and transparency. Why is it in our interest to vote against proposals that strengthen how companies operate in these areas?

According to the Key Votes Survey, Northern Trust voted with the AFL-CIO 14% of the time. Even if we agree with Northern Trust, how do we know unless we can see the votes?

What can be done? Most mutual funds, like public pension fund Florida SBA, use the ISS platform. Others, like CalSTRS, use the voting platform of a competitor, Glass Lewis. Email Acting Director Richard Gillihan (Richard.Gillihan@CalHR.CA.gov). Ask him to require contractors to provide links to their proxy-voting platforms on the Savings Plus site or have CalHR add the links to their website. Tell Mr. Gillihan that we want to see if our votes are really being cast to our benefit.