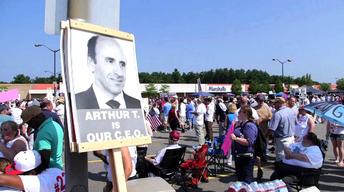 Market Basket demonstrations and boycotts have Robert Reich wondering, are we seeing The Rebirth of Stakeholder Capitalism?

In recent weeks, the managers, employees, and customers of a New England chain of supermarkets called “Market Basket” have joined together to oppose the board of director’s decision earlier in the year to oust the chain’s popular chief executive, Arthur T. Demoulas…
Arthur T. viewed the company as a joint enterprise from which everyone should benefit, not just shareholders. Which is why the board fired him.

Reich goes on to discuss “B-corporations,” and statements from companies like Standard Oil and Johnson and Johnson about the need to balance shareholder interests with those of other stakeholders and society at large. He concludes:

Only some of us are corporate shareholders, and shareholders have won big in America over the last three decades.

Maybe a bit more stakeholder capitalism is in order.

Read the transcript or listen to the PBS Newshour Report, Bare shelves for Market Basket as employees and shoppers unite in profit-sharing fight with extensive comments from CorpGov.net guest contributor Christopher Mackin.

Late Wednesday, a deal was announced. Six weeks of worker strikes and tense negotiations; now Arthur T. Demoulas and his sisters will buy out the 50.5% of shares owned by rival cousin Arthur S. Demoulas for $1.5 billion.

Strikes happen all the time in major corporations across the country and family-owned companies are no stranger to internal squabbles. So how did the strife of the Demoulas family become national news?

First of all, strikes typically only occur in union workplaces, where contracts and the collective bargaining power of unions provide workers with some degree of certainty that they will be able keep their jobs once the action is resolved…

In a nation where CEOs frequently earn literally hundreds of times the wages of low-level employees, these workers risked their own livelihoods – forgoing pay for weeks on end – for a corporate executive. The reason for that devotion is as compelling as the novelty.

You proved, all of you, that your grass-roots efforts to save your company and harness thousands of thousands of people was not about family conflict or a Greek tragedy, but more about fairness, justice and a solid moral compass that unites the human soul.

Nice to have resolution. It would have been even better if Arthur T. and his sisters would have turned to their employees for some of the financing through an ESOP.

Singing and Dancing at Market Basket

In the wake of the Market Basket “victory,” in the season of Labor Day, we should consider the larger implications of what this case can teach us. These implications include fundamental questions about the appropriate role of capital and labor under what we understand to be contemporary capitalism. Capital, and the shareholders that constitute it, including both the wealthy as well as prototypical 401(k) participants, deserves their risk-adjusted returns…

An appropriate coda to the Market Basket story that should perhaps be considered in the years ahead would share actual legal ownership between Arthur T. and the employees who literally brought him back to serve as CEO. To say that Arthur T. has earned the respect of Market Basket “associates” and the public at large would be the understatement of Labor Day 2014. Business schools and Hollywood will be eager to hear more about him in the months ahead. But Arthur T. will not live forever. His “associates” appear to have a promising future.

See also, What the Market Basket Struggle Means for Labor

Yes, Arthur T. would do well to extend a major portion of ownership to Market Basket employees. In fact, I think the perfect ending to this this story would be formation of a worker/consumer co-op hybrid, like Eroski, a part of the Spanish Mondragon Corporation group which operates supermarkets and petrol stations.