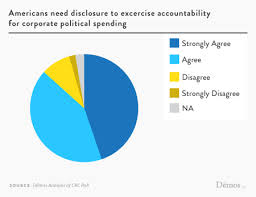 In the absence of mandatory disclosure, companies are increasingly, voluntarily adopting disclosure policies for their corporate political spending – largely in response to pressure from shareholders, investor advocates, the media, political groups and others. In this article, Chuck Nathan suggests that voluntary disclosure may or likely will become the norm – at least among larger companies – within the next few years. Given that potential, he provides some timely, seasoned advice – namely, that companies undertaking or considering such disclosure do so only in the context of a strategic communication plan that includes these critical elements:

– An explanation of the internal corporate decision making process, including the board’s role in the process and in supervision of management’s political spending decisions, to quell potential concerns that such spending favors the interests of senior management above those of the corporation and its shareholders.

– Rigorous internal coordination and controls to ensure that the amounts of political spending reported by the company are consistent with the data contained in public filings, including tax returns of recipients (such as 527 organizations).

– Accuracy of description of policies and practices. The world of political finance is very confusing and filled with technical terms and categories that can be confusing to many, including communications specialists, who might not be familiar with the different categories and nomenclature. It is not enough to get the amounts right. It also is critical that those amounts are correctly characterized and that a company’s policy and procedures be couched in precise terminology.

– Finally, the most fundamental strategic communications decision—whether or not to voluntarily report political spending at all. Before a company decides to disclose its political spending policies and procedures, it should carefully weigh the pros and cons of doing so. The decision, after all, is still voluntary.

Guest Post: Randi Val Morrison is Associate Editor of TheCorporateCounsel.net, CompensationStandards.com and DealLawyers.com. She has approximately 20 years of experience as in-house counsel with publicly-traded companies, having most recently served as Senior Vice President, Legal, Secretary & General Counsel of DineEquity, and, prior to that, Senior Vice President, General Counsel & Secretary of CSK Auto Corporation.  This post originally appeared on the The Mentor Blog on August 25, 2014. Publisher’s note: I added the graphics.