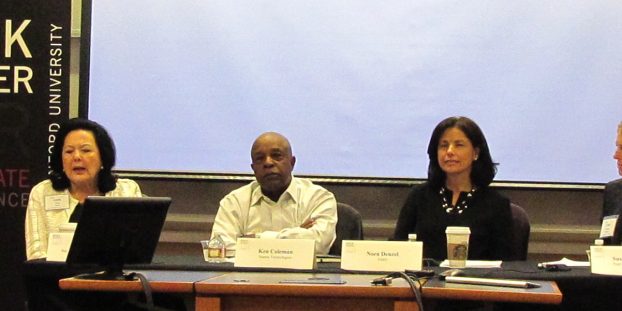 I thought the title of the program referred to heads I win, tails you lose. Now, I’m thinking ‘art’ is one side of the compensation committee coin, ‘science’ the other. Titles that keep us on our toes – just like the programs held by the Silicon Valley Directors Exchange and the Rock Center for Corporate Governance at Stanford Law. The stakes in getting executive compensation right are high, with real opportunities to engage leadership and drive business results, but also with real risks of poor outcomes. As advertized:

One side argues that compensation programs should line up with peers, trends and investor policies and guidelines to motivate executives and gain say-on-pay approvals. Another side argues that uniquely differentiated programs tied to the business are the only best practice to consider.

Panelists prepared a lively discussion about recent history, what’s happening today, and what’s on the horizon in executive pay. Not more than a minute or two into the well attended program; an interruption came in the form of a question from the audience. I thought it was a little too quick but questions, great answers and occassional debate ensued.

Una Ryan is chair of the Bay Area BioEconomy Initiative (BAB), managing director of Golden Seeds (Silicon Valley) and a partner in Astia Angel. She has a portfolio of 25 start-ups in the Bay Area. Her current board positions include AMRI (NASDAQ), RenovoRx, Bioarray Therapeutics, BayBio and Bell Biosystems. In addition, she has been a board member of numerous healthcare and policy institutes, councils and centers. Una’s business leadership has included Diagnostics For All, Inc. (DFA); Waltham Technologies, Inc. and AVANT Immunotherapeutics, Inc.

Ken Coleman is chairman of Saama Technologies, a pure-play data and analytics services and solutions company focused on solving the business insight challenges of the world’s leading brands. He also currently serves as a special advisor to Andreessen and Horowitz and advises Pinterest.  Ken is a member of the board of directors of AAA Northern California, Nevada & Utah Insurance Exchange, City National Bank, United Online and Entertainment Partners. He is a member of the advisory board of the Ohio State University Business School. Ken’s business career has included ITM Software; Silicon Graphics, Inc. (SGI); Activision and Hewlett-Packard.

Susan Stemper is a managing director with Pearl Meyer & Partners in San Francisco where she advises corporate boards and executive teams on executive and board compensation and related governance matters. Susan works extensively with emerging and growth companies in the biotechnology and technology sectors.

This program, like all SVDX programs, was subject to the Chatham House Rule. What follows are my notes. If I’m writing the way I want, you can’t tell when the opinions are mine or when they belong to the panelists or moderator. If you want attribution, you will have to attend.

Most compensation committees spend the vast majority of their time on compensation but should also look closely at management/leadership development, especially succession planning. Attraction and retention of human resources, increasingly important, as well as organizational health. Yes, there’s lots of work to be done just ensuring the SEC filings are correct. However, the comp committee can play an important role in helping to shape the culture of the company. Get to know the culture… is it similar across countries and levels?

Although the compensation committee may focus more closely on the details, it is the job of the whole board to ensure the CEO pay is high enough so that he/she will be retained and motivated. That might be especially difficult where the CEO is building a vision and wants paid aspirationally. CEOs don’t stay if paid below market. Total Shareholder Return (TSR) part of package but variable. Separation agreements sloping down now and phase out after a few years. Separation pay should be there for when the initial fit was no good, not to reward a CEO who has been there for years for poor performance.

The compensation committee should also drill down below named executive officers (NEOs). Actual meeting time is probably mostly around compliance but it is important to meet individually with company execs at various levels.

Some are not looking to pay at the 70% level of peers; more acceptable now to pay at the median of peers. The Lake Woebegone notion that everyone is above average is changing. Mix of restricted stock units (RSUs) options, etc. depend on life cycle of company and tax consequences for the CEO. How evaluate exit packages? Negotiate the exit package before the exit. ISS has strong guidelines. Make whole grant to get CEO to come over… risk must be compensated. Greater risk is greater reward — that’s the part of the CEO you want to appeal to.  Set out ‘guard rails’ before you even start negotiating with and fall in love with the candidate. The biggest challenge is when you are involved in a turnaround.

The big elephant in the room is ISS. They aren’t executive compensation specialists. Can you generate the courage to do the right thing and maybe get slapped by ISS? The process is one of collaboration with CEO, compensation consultant (who must really understand the business and the specific business), and the committee… although you may get additional feedback from shareholders and ISS. Too often, boards are setting compensation before the budget and strategic plan.

Use scientific metrics when you’re planning but then the art comes in. One talked about having a ‘voice of shareholder’ segment at a board meeting during lunch. I thought that was and interesting way to increase communication with shareholders. Talk to ISS before there is a problem, not when your back is against the wall with a say on pay vote. Yes, you can get brownie points from ISS for engaging or even changing the name of a committee. Get to know them. Get to know your shareholders too, but don’t talk to them privately as compensation committee members.

Nonfinancial reviews. Do a full 360, not just financials. 25% non financial contribution to pay package is sometimes used with several goals in that area, such as incentivizing against reputational risk. Crazy perks are not coming up as much. Transparency. Is it business necessity? Why shouldn’t it apply to all employees in the company. Watch out for the inappropriate.

Directors have the same interest as the shareholders. We are shareholders too (not always at some of my companies). Trending in the right direction. Transparent and reigning in a bit. Boards and NEOs need to be aligned with shareholders.

I asked about Charles Elson’s research on the mythological market for CEOs. Shouldn’t companies look more to internal pay, rather than peer companies? Yes, but that’s most applicable when you draw from inside. Everyone says that’s what they want, but in my opinion, too few focus enough on that goal.

The CD&A has led to more transparency. There’s more interaction with shareholders and ISS than ever before. Start your dialogue during the off-season. Focus on pay for performance. In Silicon Valley, the is a war for talent is acute. Social media has created walls of glass. The horizon for compensation committees looks a little less rocky. Say on pay helped create something of an earthquake. Pay ratios, if required reporting come, is expected to be more like a tremor.

Summary: This Closer Look illustrates the relation between executive compensation and organizational risk through the context of the financial crisis of 2008. We demonstrate that the incentives that bankers had to increase firm risk not only increased but increased substantially in the years preceding the financial crisis.

In 2006 (prior to the financial crisis), the average CEO of a bank included in the S&P 1500 Index was paid $5.8 million but held $106 million of stock and options. The incentive value of portfolios dwarfed the CEO’s annual or ‘flow’ pay. Equity-based risk-taking incentives were consistently higher among banks than nonblanks and were highest the banks that originated and distributed securitized assets.

‘Excessive’ risk taking; you can be everyone will have their own opinion about when that has been reached. See also from pwc, Key issues: Executive compensation and say on pay – Last year 70% of directors say their boards took some form of action following their say on pay vote. The most frequent change is enhancing proxy statement compensation disclosures.