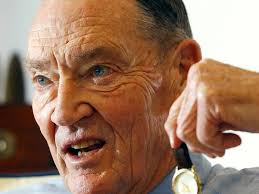 Buying and holding stocks and bonds for the long term and maintaining a diversified portfolio are still the smartest strategies for the average investor, says Vanguard founder Jack Bogle in answer to Mark Cuban and other critics of these traditional approaches. In the Big Interview with Journal columnist Jason Zweig, Bogle takes aim at the culture of market speculation. Betting on long odds, he says, “doesn’t pay off very often.”

Jason Zweig conducted a very nice interview with Jack Bogle. I thought Zweig was getting close to identifying one of the real problems with index funds when he raised the the issue of market volatility and destabilization. See Xiong, James X. and Sullivan, Rodney N, How Index Trading Increases Market Vulnerability (March 26, 2012). Available at SSRN. Financial Analysts Journal, Vol. 68, No. 2, 2012. Bogle expressed his concern that index funds are now responsible 40% of stock trading. The source of this churning largely comes from ETFs and he gave an example of the SPDR S&P 500 ETF Trust, which he said had a 10,000% turnover in a single years.

That’s a far cry from Bogle’s invention of buy and hold index funds. However, I wish Zweig had followed up with a question about the lack of incentive to monitor corporate governance that seems built into the index fund model. As I have argued elsewhere, the easiest way to fulfill the prudent man standard of care is to index your portfolio and vote like lemmings.  Why should it be prudent for indexed investors to continue investments in a company quickly plunging toward bankruptcy?

Large funds, such as Vanguard, Northern Trust, BlackRock and Fidelity (see AFL-CIO Key Votes Survey Results for 2012) have little incentive to monitor their portfolios and take an active role in challenging management and boards. Since they hold diverse portfolios, any benefit they could obtain through such actions would equally benefit competitors, while they would bear all the costs (free rider problem).

The role of active monitoring to take corrective action has been taken up by activist hedge funds, “who acquire a significant but non-controlling stake in a corporation and then try to alter the company’s business strategy initially through persuasion but sometimes through a follow-on proxy contest.” Additional active monitors can be found in funds that either don’t compete in the marketplace (public and union pensions) or who compete on the basis of investor values that extend beyond merely making money (SRI and other funds focused on Sustainable, Responsible, Impact Investing), as well as individual investors.

ProxyDemocracy.org has a very simple way of rating the activism of funds. Vanguard certainly isn’t among the worst, but I think this chart provides some evidence the Vanguard Fund family doesn’t spend much on monitoring. That pays off for the individual investor. However, it can be devastating to our collective society. The more that is invested in index funds, the more likely management is to be entrenched, self-serving and irresponsible to the larger society. I wish Jack Bogle would talk to us about that.