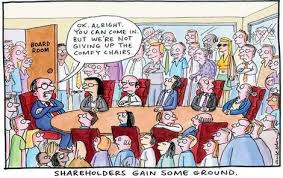 The July 2014 edition of Corporate Governance: An International Review contains four research papers, all dealing with firms outside the US and UK, which usually get most of the attention. Still, insights from these studies could help efforts around the globe, including the US and UK.

The first paper, Agency Theory in Practice: a Qualitative Study of Hedge Fund Activism in Japan, explores hedge fund activist in Japan. The authors find that managers of large Japanese companies do not see themselves as tied to shareholder primacy but as responsible to a wider set of stakeholders. Large domestic institutional investors share the same view. The principle-agent model can be a weak fit, or no fit. Convergence is not inevitable. Practitioners need to assume culture is a very important factor to take into consideration.

Large Shareholders, Shareholder Proposals, and Firm Performance: Evidence from Japan, almost provides a contradiction. It finds that legally binding shareholder resolutions can incentivize managers to increase performance. The research was, again, conducted in Japan. The financial market responds favorably to such proposals by large shareholders who, the authors conclude, can play an important monitoring role, formerly played by the main banks. Such proposals were introduced where there was less insider ownership and where firms were less efficient, so perhaps there is no contradiction. Even in stakeholder dominated corporate governance, such as is found in large Japanese companies, shareholders are important and binding shareholder resolutions are the quickest way to get the attention of entrenched managers.

Politically Connected Firms and Earnings Informativeness in the Controlling versus Minority Shareholders Context: European Evidence, is set in Spain.

We find that the presence of politicians on the board negatively affects earnings informativeness. We also find a positive impact of the divergence between the dominant owner’s voting and cash flow rights on the informativeness of accounting earnings in politically connected firms…

The results of our study may be useful to regulators interested in increasing transparency in order to promote a more efficient allocation of resources.

All the more reason that shareholders in the United States should support proposals aimed at disclosure of political contributions. There have been a growing wave of such resolutions since Citizens United v FEC limited the government’s ability to constrain corporate political expenditures. Justice Kennedy’s majority opinion in justifies the Court’s by pointing to the Internet.

Yet, corporations are not required to make the disclosures to shareowners as Justice Kennedy seems to have believed. The growing number of resolutions enacted company by company may just lead the SEC to make such disclosures a requirement, bringing to reality Justice Kennedy’s imagination.

Last, Institutional Investors on Boards and Audit Committees and Their Effects on Financial Reporting Quality, also set in Spain, finds that institutional directors are effective monitors. When directors and audit committee members were appointed to savings banks by investors, the banks faced a lower likelihood that the firm receives a qualified audit report of questionable quality.

Cultural differences are extremely important, but there are entrenched managers in every culture that perform better when monitored.

Should CEO Des Hague be Fired for Kicking Puppy?
Outsourcing the Board Isn’t Warranted or Remedial