This is first time I’ve attended a Council of Institutional Investors (CII) semi-annual conference. Already posted are CII Fall 2014 Conference: Part 1 and CII Fall 2014 Conference: Part 2. In part 3 a panel of experts discusses several legal developments during 2014 and Tim Koller, with McKinsey, discusses how to create growth for the long-term. Warning: I’m not an attorney or full-time consultant. Don’t depend on this post for an accurate account. My primary motive is to get you thinking, and checking out other resources as well, on the subject of corporate governance.

I took a lot of notes during this session but as I look back on them I see many of them are even too cryptic for my low standards. It was all about case law and if I didn’t even get the names of the cases correct my report could be more misleading than informative. I spoke with a few others in attendance. Unless they were attorneys or somehow involved, most of the discussion was over our heads. One theme seemed pervasive; the US Supreme Court has been busy eroding the rights of shareowners. Just don’t sue me if I got anything wrong. I could say my reporting is for entertainment purposes only. At least you might see something that will make you want to find out more.

The first case discussed was Halliburton Co. v. Erica P. John Fund, Inc. Investors can recover damages in a private securities fraud action only if they prove they relied on the defendant’s misrepresentation in deciding to buy or sell a company’s stock. Rebuttable rather than conclusive. In Basic Inc. v. Levinson, the Supreme Court held that investors could satisfy this reliance requirement through a presumption that stock trades in an efficient market, reflecting all public, material information… including material misstatements. Halliburton failed to provide the “special justification” necessary to overrule that presumption. However, defendants can defeat the presumption at the class certification stage using evidence that the misrepresentation did not, in fact, impact the stock price.

There was a lot more to it than that. Class certifications become more expensive. It increases the cost of litigation.

The Supreme Court decided not to weigh in on Public Employees’ Retirement System of Mississippi, v. IndyMac, which challenged the time limits for investors to join or opt out of class-action lawsuits.. By dismissing the case without comment, the court will no longer decide whether the three-year window for filing certain securities claims is suspended if investors can show they would have been parties in a previously filed class action lawsuit had it not been dismissed. Lower courts are split on the question.

Filing by one claimant doesn’t necessarily reserve a spot for all. Now with Indymac and the 2nd Circuit Court decisions standing, you have to have filed. As a consequence, investors will file earlier and more often.

Omnicare, Inc. v. Laborers District Council Construction Industry Pension Fund. Whether, for purposes of a claim under Section 11 of the Securities Act of 1933, 15 U.S.C. § 77k, a plaintiff may plead that a statement of opinion was “untrue” merely by alleging that the opinion itself was objectively wrong, as the Sixth Circuit has concluded, or must the plaintiff also allege that the statement was subjectively false – requiring allegations that the speaker’s actual opinion was different from the one expressed – as the Second, Third, and Ninth Circuits have held.

The argument here is that you may have to show that the person who made a statement knew it was false. We complied in ‘our opinion.’ The rest of us are in trouble.

These cases seemed to get even more in the weeds. Wal-Mart Stores, Inc. v. Indiana Electrical Workers Pension Trust Fund IBEW. The Delaware high court said that the well-established attorney/client privilege does not apply, or is subject to an exception, if a stockholder needs the otherwise inaccessible information to sue a director for breach of fiduciary duty. A similar analysis was applied to documents otherwise protected by the work-product doctrine. This opinion will have lasting importance for corporate and commercial litigators regarding this topic.

There’s an antitrust conspiracy in Delaware Chancery Court. Chancellor Leo Strine and Vice Chancellor Travis Laster are engaged in a cooperative effort to restrain the trade of shareholder lawyers who file derivative suits without obtaining books and records discovery. I’ve told you about Laster’s decision in the Allergan case, in which he found that shareholders who rushed to sue in California didn’t adequately represent the corporation (the nominal plaintiff in derivative litigation); and about Laster’s follow-up explanation that “diligent plaintiffs should get to litigate,” when he certified the case for appeal. On Monday, Strine echoed Laster when he refused to appoint a lead plaintiff in the derivative litigation over Wal-Mart’s alleged bribes in Mexico… (more from Alison Frankel at Reuters)

Our panel offered up a general reminder not to include nonpriveliged facts in an a attorney client privileged document.

On May 8, 2014, the Delaware Supreme Court issued an opinion in ATP Tour, Inc. v. Deutscher Tennis Bund (German Tennis Federation), No. 534, 2013 (Del. May 8, 2014), holding that fee-shifting provisions in a Delaware non-stock corporation’s bylaws are not per se invalid. The bylaw at issue shifted all litigation expenses to an unsuccessful plaintiff in intra-corporate litigation who did “not obtain a judgment on the merits that substantially achieves, in substance and amount, the full remedy sought.” The court noted it was not deciding whether the specific bylaw at issue was adopted for a proper purpose or enforceable under the circumstances.

What I got out of it was that if you are the losing party and you don’t get 100% of what you want, then you pay both your costs and theirs. More at Break Point? Delaware Supreme Court Upholds Validity of Fee-Shifting Bylaw.

There will several more cases but I’ll quit before I get too deep into it. It would have been nice to have a handout with a paragraph or two on each case. 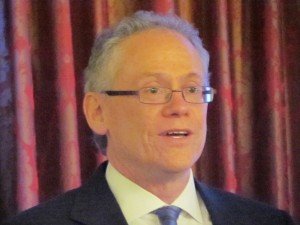 Koller spends time trying to dispel myths in the market. Regarding consensus earnings targets, they must consistently miss to be important.

Look at Fundamentals – For example, long-term growth at Walgreens has been 22x in 25 yeas, whereas General Mills only grew 3x. But valuation creation was the same at both because return on capital was so much greater for General Mills – 16% vs 29%, if I got those numbers right.

Not all growth is created equal. New product returns are generally much greater than acquisition, where a lot of money must be spent up front. You can’t cut costs as a way to prosperity if it leads to underspending in marketing and R&D. Colgate is one example where they went off the rails and later corrected.

Koller stressed the importance of dashboards and the proper level of granularity. Most need to manage at a more granular level. Reallocation of resources. Move resources to where they will have the most impact. Example of increasing sales and ROIC after reallocation.

Underinvestment and change ideas. – Corporate profits at all-time high but the focus is too often on margin, not growth. 45% felt companies are too risk averse. 50% say we are underinvesting.

Boards need to be more agile during the year. He encourage listening to the right investors. Companies pay attention to ‘trading’ investors most because they hear from them the most. They need to pay more attention to their ‘intrinsic’ investors. Short-termism is reinforced throughout investment decisions. Pick asset managers with longer horizons, expand your own performance horizon, demand more insights from consultants.

Many companies are too complex. CEO pay is often driven by the size of the company. Refocus executive compensation. Lengthen horizons, measure TRS relative to peers, not the whole market. Ensure balance between growth and ROIC. Tie compensation to specific strategic accomplishments. Link to unit performance, not consolidated results. Pay by unit performance.

The fact that directors are elected every year doesn’t make that much different. They are on for longer. Those that attract attention have usually had issues developing over many years.