This is first time I’ve attended a Council of Institutional Investors (CII) semi-annual conference. My report from first day events can be found at CII Fall 2014 Conference: Part 1. See also, Part 2 and Part 3. There are no fact checkers or even grammar editors here at corpgov.net, so read with that warning. I’ll try to attend CII more often. It was a great event… very informative, lots of interesting people trying to do their fiduciary duty and a bit more.

Lockyer never heard of a member of the legislature who really cares about rating. Disclosure is important. California has had for many yeas but so voluminous that it isn’t so useful.

Wheeler went through and highlighted key relevant data in real-time instead of quarterly – grading the budget and threatening to make it public.

Oregon is 96% funded with side accounts. 1/2 the unfunded liability of 2 years ago. Capped salary for pension calculation. New tiers with hybrid plan for new hires. COLA for existing retirees repealed.

CalPERS modified 2 years ago. Lower benefit payouts, cap on pensionable benefits, extended years to full benefits. CalSTRS recently got boost. More in the form of contribution increases than anything else. Aggressively committed to DB. 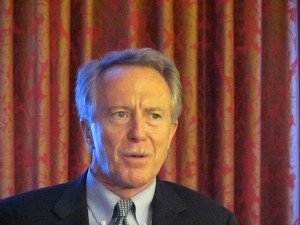 Washington 4th best funded in country. Default plan is a hybrid but can still opt into DB and most do. Large debt per capita but not in area of pensions.

Role for pension plans in infrastructure. CA investing heavily but have to bring other capital in. Looking at connecting West Coast infrastructure exchange to consolidate expertise and access to capital to make investment more viable for large funds. Now testing viability of model. McIntire says infrastructure investment based on regional jurisdiction can often raise money at lower rates.  Cost of capital with institutional investors is 6% but they can often raise through municipal bonds at 4%.

Hosted by CalPERS, CalSTRS, New York City Pension Funds and North Carolina. I thought this was one of the more interesting sessions, especially with regard to format. After each of the host representatives spoke briefly, they invited additional stories from the audience. That wouldn’t work for every topic but for this topic it was a clear winner.

Anne Sheehen is looking for diversity of mindset and thought… now a mainstream issue. Board refreshment. Amend charter to include diversity in criteria. 3D to address supply issue. Diverse backgrounds. GMI ran, MSCI moving forward to next step. 800 candidates in database. Also member of 30% coalition. California initiative focused on California companies with no women on boards… 132 companies. Heard back from 35; 21 have already added women. Another Credit Suisse report shows results better at companies with women on boards. Proxy access usually only in contentious situations.

Janet Cowell, North Carolina Treasurer, is placing emphasis on the role of disclosure. Petition to SEC for greater disclosure.

Michael Garland – Executive suite is less diverse than boardroom. It shouldn’t be that hard to move the needle. Next step. Blackrock had no women on board, now four. CFA Institute proxy access study says further adoption of such proposals would increase market cap up to $140B. It would lead to more responsive boards. ICGN is also focusing on diversity. Other efforts around the globe.

Carol Nolan Drake from OPERS rose from the audience to emphasize the importance external managers. Their’s were voting against board diversity measures.

Thersa Whitmarsh, Executive Director of the Washington State Investment Board told us something of her work with the World Economic Forum at Davos. People there were arguing there is a dearth of qualified candidates for boar positions. Her advice was, ‘don’t exclude 50% of the population.’

Frank Lord – city of Hartford retirement fund. We are not going to get new board members if there isn’t turnover.

Brandon Reese with the AFL-CIO said they filed 3 shareholder resolutions at companies with no women on boards. Discussing issue of director qualifications. Don’t limit to former CEOs. Don’t ignore other pools of talent.

Jon Lukomnik – NACD conference coming up will devote a dinner to the issues. Boards loathe to look at board evaluations. Maybe evaluations should be floated as a form of proxy proposals, emphasizing the need for independently led evaluations.

Dario Trevisan pointed out that in Italy, boards must include 1/3 of the ‘less represented gender’ by 2015. (I guess that’s in case it flips and there are more women on board.. they will have to recruit men.) Would proxy access improve the situation?

More from CorpGov.net at Investing in Women & Inalienable Rights: Part I